THE CREW OF THE ATMOSPHERE. -- Nine sailors of the ship Atmosphere were arrested January 9th, says the Bulletin, by Chief Curtis and officers Sayward and Baker, for desertion. Their names are C. R. Brown, William Coffin, J. Harmon, J. Salston, John Brown, Frank Disser, A. Williams, J. Nelson and Jacob Ecks. The same men brought suit against the ship some days ago for wages.

FROM THE SANDWICH ISLANDS 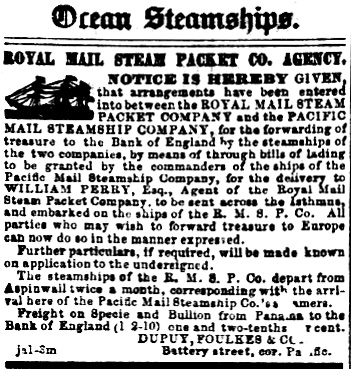 Vessels on the Way From
Eastern Domestic Ports to San Francisco 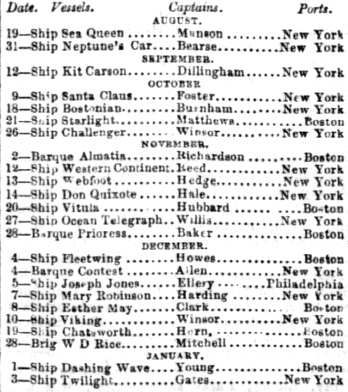 Per Columbia Left San Francisco Feb. 6th, at 10:30 A. M.; arrived off Humboldt Feb. 7th, at 8 P. M; left there Feb. 9th at 8 A M.,, having been detained 36 hours; made all way ports, off Point Grincell met very strong northwest winds, which lasted 24 hours, with violent hail and rain squalls; entered the mount of the straits Feb 12th, at 8 P.M.; in the straits encountered very severe snow storm from the northeast, the snow lying a foot deep on the deck. Arrived at Olympia Saturday, February 13th, at 9 P.M.; weather in the straits intensely cold, theremometer being at no time at midday above twenty-five degrees adn ranging as low as 5 degrees above zero; some of the crew were frost-bitten, and the decks, rigging, and wheelhouse covered with ice.

Left Olympia Feb 14th, at 8 A.M., touching at Fort Ludlow for coals; passed Tatoosh light, at 4 A.M., Feb 15th, on the down trip, off Columbia River; saw a steamer's lights, apparently lying to off the bar. Feb 16th, at 10 P.M., was off Umpqua unable to go in on account of southerly winds; same night had heavy S.W. gales, lasting 48 hours, most of which time the ship was hove to. Feb 17th, 3 P.M., met the steamer Santa Cruz bound north; that night the gale set in with increased fury, with violent squalls, and thunder and lightning, lost fore spencer, stove guards and wheel houses. Feb 19, the wind abating, stood in towards land; at 8 P.M., made Trinidad Harbor; took in wood and provisions, and left there Feb 20, at 8 P.M.; at 10 P.M., off Humboldt bar, passed a fore and aft schr name unknown, of about 25 tons, on her beam ends. Feb 21, at 3 P.M., touched at Mendocino City for wood, left at 8 P.M.; arrived off the Heads at 11 A.M., 22d inst. Left at Olympia, Chili ship Matias Cousins, loading lumber, at Mendocino, brig Judson, lying on the beach having driven ashore in the gale of Wednesday night. She is a total wreck, but there were no lives lost.

Vessels on the way from
Eastern Domestic Ports to San Francisco 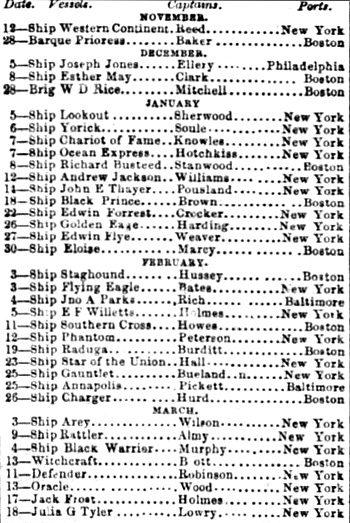 Under Full Sail: Silent Cinema on the High Seas

Captain G. D. Williams
Captains exercised absolute authority at sea and so were dubbed "Master Under God" by early insurance writs, agreements with ship owners and passengers and the Board of Trade.

The captain is responsible for its safe and efficient operation, including cargo operations, navigation, crew management and ensuring that the vessel complies with local and international laws, as well as company and flag state policies.

All persons on board, including officers and crew, other shipboard staff members, passengers, guests and pilots, are under the captain's authority and are his ultimate responsibility.

On international voyages, the captain is responsible for satisfying requirements of the local immigration and customs officials.Immigration issues can include situations such as embarking and disembarking passengers, handling crewmembers who desert the ship, making crew-changes in port, and making accommodations for foreign crewmembers.

Customs requirements can include the master providing a cargo declaration, a ship's stores declaration, a declaration of crewmembers' personal effects, crew lists and passenger lists.

The Oxford Handbook of Maritime Archaeology

(Oxford Handbooks)
Editors: Alexis Catsambis, Ben Ford, Donny L. Hamilton
A comprehensive survey of the field as seen through the eyes of nearly fifty scholars at a time when maritime archaeology has established itself as a mature branch of archaeology. This volume draws on many of the distinct and universal aspects of maritime archaeology, bringing them together under four main themes: the research process, ships and shipwrecks, maritime and nautical culture, and issues of preservation and management.

Merchants of Grain:
The Power and Profits of the Five Giant Companies at the Center of the World's Food Supply

Shipwrecks of the Pacific Coast

Breverton's Nautical Curiosities:
A Book of the Sea

The Clipper Ship Era
An Epitome of Famous American and British Clipper Ships, Their Owners, Builders, Commanders, and Crews, 1843-1869

David W. Shaw
Through a study of a record-breaking 89-day voyage from New York to San Francisco, the author recreates life aboard a 19th-century clipper ship. He tells of the role of the ship's navigator, Eleanor Creesy -- who was married to the captain and who helped chart a safe voyage through dangerous seas. Much of this book is based on primary source material: diaries, letters, and ship's logs.

Greyhounds of the Sea: The Story of the American Clipper Ship

Carl C. Cutler
This is a rare and invaluable book for all who love the sea and ships.

The Era of the Clipper Ships:
The Legacy of Donald McKay
(Volume 1)