Vessels on the Way to and Loading for San Francisco, July 21st 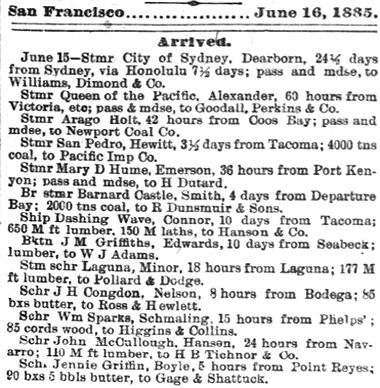 The steamer City of Peking arrived from China shores yesterday afternoon with a large cargo of coolies, one of whom was dead.

An investigation by the Morgue officials proved that on the trip the dead coolie had indulged so much in smoking opium that his supply gave out.

Being unable to procure some more of the drug, he was attacked by the "habit," as it is called, which was so severe that it killed him before he could be relieved.

The War Feeling in the Colonies Strong
Career of the Forger, S. W. Green,
While in Sydney His Flight.

Among the passengers who arrived in this city on the Australian steamer City of Sydney yesterday was Mr. G. D. Kahlo, whose father for the past four years has been United States Consul at Sydney. Mr. G. D. Kahlo is a young man, not only very affable in address, but also abounding in interesting reminiscences of his sojourn in Australia. An Alta reporter, who sent up a card, was at once granted an interview by Mr. Kahlo. In response to the first query put by the reporter, Mr. Kahlo replied:

"So you want to know what I can tell you about Australian affairs, do you? Well, I'm afraid I haven't any very valuable information, but I shall be pleased to tell you whatever I can."

"I suppose, just at present,'' said the newsgatherer, "that the principle topic of interest in the colonies is the probability of an Anglo-Russian war."

"Yes; there is no little excitement in that respect, and the British Government is now engaged in fitting up the O. and O. steamship Massalia and the Orient steamship Lusatania as cruisers, to patrol the Australian coast. There is also a very great interest taken in the militia, and, in fact, all the volunteer military organizations. On the 3d of last March, you perhaps remember, some 750 troops left Sydney for Egypt. That was one of the greatest days ever seen in Sydney. The people fairly went wild with excitement, and thousands and thousands of spectators crowded the streets all along the line of march to the transport ships. The troops consisted of 500 infantry and 250 artillerymen. Nearly all these volunteers were from the local military companies. The enthusiasm was intense, J and I think the Russian difficulty coming upon the people while yet in an excited and warlike frame of mind, there would be but one sentiment and that for war. At Melbourne for a time no strange vessel was allowed to enter the Heads between the hours of sunrise and sunset, and they enforced a similar rule at Sydney for two days, I think. Measures for defence were taken at Sydney by stretching alone: one side of the harbor a line of torpedoes. In regard to those troops which went to the Soudan, I believe they saw no fighting, and there were but two deaths among them. As to a future confederation of the colonies, I think that, judging from the tone of the prevalent sentiment, if it occurs at all, it will be in the remote future. 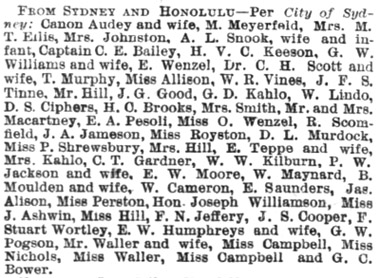 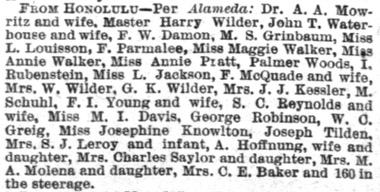 The Duke of Edinburgh was daily expected to arrive at Auckland from Australia, via New Caledonia, in the Galatea.

The Earl of Pembroke, who was cruising among the South Sea Islands, was wrecked. He was picked up together with the captain and crew by a passing vessel.

The Big Spenders: The Rich Rich, the Grandees of America, the Magnificoes, and How They Spent Their Fortunes

Lucius Beebe
The Big Spenders was Beebe's last and many think his best book. He describes the consumption of the Gilded Age. Beebe enjoys it all immensely, whether it is James Gordon Bennett buying a Monte Carlo restaurant because he was refused a seat by the window, or Spencer Penrose leaving a bedside memo reminding himself not to spend more than $1 million the next day.

Charles R. Morris
The acclaimed author brings the men and their times to life. The ruthlessly competitive Carnegie, the imperial Rockefeller, and the provocateur Gould were obsessed with progress, experiment, and speed. They were balanced by Morgan, the gentleman, who fought for a global trust in American business. Through antagonism and their verve, they built an industrial behemoth — and a country of middle-class consumers. These four determined men invented a nation of economic participation not imagined a few decades earlier.

Imperial San Francisco: Urban Power, Earthly Ruin
(California Studies in Critical Human Geography)
Gray Brechin
First published in 1999, this traces the exploitation of local and distant regions by prominent families — the Hearsts, de Youngs, Spreckels, and others who gained power through mining, ranching, water and energy, transportation, real estate, weapons, and mass media. A story of greed and ambition on an epic scale, tracing the connections between environment, economy, and technology with links that led, ultimately, to the creation of the atomic bomb and the nuclear arms race.