The Ship Passenger site stems from The Maritime Heritage Project, created in 1997 to record the history of passengers, ships, captains, merchants and merchandise sailing into California during the mid-to-late 1800s.

The Maritime Heritage Project, started in 1997, is a free research tool for those seeking history of passengers, ships, captains, merchants and merchandise sailing into California during the mid-to-late 1800s.

The project receives no support other than purchases through affiliates and donations from visitors who have found information about their sea-faring family.

All research and site development (including HTML, CSS, JavaScript, writing) is by Dianne A. Blethen Levy, great-great-grandaughter of Captain James H. Blethen. This has become one of the largest maritime history Websites in the world.

Comments include: "There is no other site like it in the world," "For the first time during years of research, I found information about family members."

The site illustrates the importance of a global awareness; the health and wealth of nations was formed by individuals who migrated seeking refuge and opportunity.

Our World Belongs to Everyone

The Maritime Heritage Project was started in 1997 as an historical research paper by Lauren Hewett. The subject, Captain James H. Blethen, her great-great-great Grandfather, was a sea captain based in San Francisco during the mid-1800s. Her idea brought him to life, along with thousands of other captains, ships, merchants, merchandise and world migrations.

Beginning in 1852, Captain Blethen sailed into San Francisco with thousands of immigrants seeking new lives and gold in Northern California.On Christmas Day, 1870, Captain Blethen opened the Pacific Mail Line routes between Hawaii and Australia/New Zealand. When the Captain retired from life at sea, he was elected Chief Wharfinger in San Francisco.

The Maritime Heritage Project led to a growing respect for ships and their captains for their enduring commitment in safely moving merchandise, livestock, and people around the world under unpredictable and often dangerous conditions.

More than 45 years of travel, research and 30,000 hours have gone into the project to preserve San Francisco's shipping history and present an overview of world migration during the 1800s. The project continues as new sections are added or expanded. (Refer to Bibliography.)

Who Views The Maritime Heritage Project?

(As of November 2015: Various sources including Google Analytics, Urchin, Alexa.com. Please keep in mind that this is a one person project; these statistics were achieved through 15 years of focus.)

Out of a possible:

The market is international: Given the aging of America, family historians/genealogists are blossoming. The San Francisco Bay Area has 7.44 million residents, many with ancestors who arrived by ship. Thousands of families have an "historian" (one genealogical library received 30 million viewers, although a time frame was not given nor numbers substantiated).

The major project, MaritimeHeritage.org, created in 1997, is a history of passengers, ships, captains, merchants, merchandise and military sailing into California during the mid-to-late 1800s. The site illustrates the importance of a global awareness; the health and wealth of nations was formed by individuals who migrated seeking refuge and opportunity.

Odds are your ancestors travelled by sea or via extensive overland routes during the 1400s, 1500s, 1600s, etc. No matter where you live now, the chances are great that you are from elsewhere.

We recently had our DNA tested to determine just where we began. While we knew about our Irish and German ancestors from the early 1800s-on, we had no information prior to 1830. Turns out It's fascinating.

Here's our map; much to our surprise, our heritage also includes Sweden, Norway, Denmark AND Italy and Greece. Family research/stories included Germany, Ireland, England, and France. But nothing about other countries. 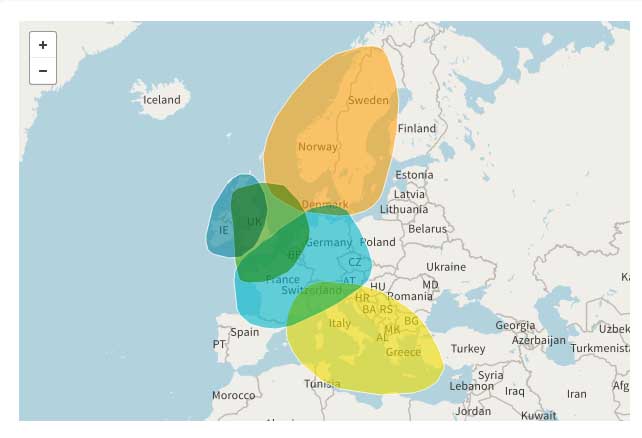 Do you know how far back you go and from where? 23 pairs of chromosomes define you.

Find out what percent of your DNA comes from populations around the world, ranging from East Asia, Sub-Saharan Africa, Europe, and more. Break European ancestry down into distinct regions such as the British Isles, Scandinavia, Italy and Ashkenazi Jewish. People with mixed ancestry, African Americans, Latinos, and Native Americans also get a detailed breakdown.

Recently, scientists used the technology to confirm the identity of a skeleton buried beneath a parking lot in Leicester, England, as King Richard III, who died in battle in 1485. The scientists matched the bones to two living maternal-line relatives, according to the University of Leicester, which conducted the analysis along with radiocarbon dating and a skeletal exam.

“I think a lot of people find it of use to them, personally, especially if they are searching for a form of identity they are able to uncover in this way,” said Noah Rosenberg, associate professor at Stanford University’s Department of Biology and expert in evolutionary biology and genetics.

As DNA is passed down from one generation to the next, some parts remain almost unchanged, while other parts change greatly. This creates a link between generations and it can be of great help in reconstructing family histories. DNA testing can:

DNA tests have been around for many years, but it is only recently that the cost of genetic testing has finally come down into the realm of possibility for the average individual interested in tracing their roots.

They usually consist of a cheek swab or mouthwash to easily collect a sample of cells from the inside of your mouth. You send back the sample through the mail and within a month or two you receive the results.

The Barbary Coast: An Informal History of the San Francisco Underworld

The Magnificent Rogues of San Francisco: A Gallery of Fakers and Frauds, Rascals and Robber Barons, Scoundrels and Scalawags

The American Clipper Ship, 1845-1920: A Comprehensive History, with a Listing of Builders and Their Ships

America and the Sea: A Maritime History