Anguilla was inhabited several thousand years ago and at various times by some of the Carib peoples who arrived from South America. One of these groups, the Arawaks, settled in Anguilla more or less permanently in about 2000 B.C.E. The Antillean Arawak, or Taino, were agriculturists who lived in villages, some with as many as 3,000 inhabitants, and practiced slash-and-burn cultivation of cassava and corn (maize). Despite their complex social organization, the Antillean Arawak were not given to warfare. They were driven out of the Lesser Antilles by the Caribs shortly before the appearance of the Spanish.

English are the first recorded of Europeans to arrive on the island; they had first colonized Saint Kitts, and then Anguilla in 1650.

By this time the Arawaks had vanished, probably wiped out by disease, pirates, and European explorers. However, in 1656 the English in turn were massacred by a group of Caribs, famous for their skill as warriors and farmers. The English eventually returned and attempted to cultivate the land but Anguilla's dry climate prevented its farms from ever becoming profitable.

England was the most successful of the northwestern European predators on the Spanish possessions. In 1623, the English occupied part of Saint Christopher and in 1625, they occupied Barbados. By 1655, English colonies had been established in Nevis, Antigua, Montserrat and were being established in Jamaica.

The northern most island in the Leeward chain in the Lesser Antilles, Anguilla is approximately 20 minutes by sea from St. Martin/Maarten. Anguilla's capital, The Valley in located in the center of Anguilla. The island is about 17 miles long and 3 miles wide at it's widest point. Nearby islands include Scrub, Seal, Dog and Sombrero Islands and Prickly Pear Cays. Anguilla is five miles (eight kilometers) north of Saint Martin and sixty miles (ninety-seven kilometers) northeast of Saint Kitts.

According to tradition, Christopher Columbus gave the small, narrow island its name in 1493 because from the distance it resembled an eel, or in Italian, anguilla. It is also possible that French navigator Pierre Laudonnière gave the island its name from the French anguille.

During the 1600s most Anguillans survived by working small plots of land, fishing, and cutting wood for export. Indentured European servants provided most of the labor.

However, by the early 1700s, the slave-plantation system was gradually beginning to become the dominant economic system in the eastern Caribbean. The growth of the slave trade was directly tied to the cultivation of sugarcane, which was introduced to the West Indies in the late 1600s from the Mediterranean. It quickly became the most valuable cash crop.

Throughout the West Indies, planters began seeking "coolies" to work their land.

England's Emancipation Act of 1833 officially abolished the slave trade in its Caribbean colonies; by 1838, most of the landowners had returned to Europe; many of them having sold their land to former slaves.

The planters are seeking to introduce coolies. They are in need, they say of 2,000 laborers; and it is to be presumed that they understand their own wants. At the same time it is very certain that Antigua, with a population of 318 to the square mile, and with six-sevenths of her superficial area pre-occupied by large proprietors, is not in the condition of Jamaica or Trinidad with their immense tracts of fertile soil thirsting for settlement and cultivation. The planters of Antigua have never complained of emancipation. They avow, what is unquestionably the truth, that, by the introduction of a cheaper system of labor, the island was saved from impending ruin. They were the first to get rid of slavery, and they have no reason to regret that they did so. In the present demand for labor they use fair and liberal language, and place one prominent cause of the deficiency of Creole labor in this and all British islands, in its true light.

"We regard" say the Legislative assembly in their reply to the last address of the Governor "We regard the withdrawal of a large number of the laboring population from the estates, either to engage in the cultivation of land purchased by themselves or to embark successfully in other avocations of life, as the natural consequence of an improved material condition, of the free and equal administration of the law, and of the facilities largely enjoyed for civil and religious instruction; but while we acknowledge and sympathize with this abstraction, it is clear that a deficiency has been thus created in the supply of manual labor to an extent which is not to be compensated either by increased skill, by implemental husbandry, or by the application of extended capital."

While the statement here made is one undoubted cause of the deficiency complained of, it is not the less true that the abstraction of labor from estates was abetted by planters themselves in times not yet passed away when want of capital was more preening than want of labor. If capital was abundant, it surely lay in the power of the proprietary body, or of individual planters, to retain their land, if they believed that the sale or lease of allotments to the laborers would inflict a serious injury to the planting interest.

Yet they did sell and still continue to sell, and the negroes continue to buy, though land is scarce, and averages in value $50 per acre In the last Government report bearing on this subject I find it stated that there is " no squatting in Antigua of any importance in its effect on the supply of labor. The facility," continues the report," which the laboring population possess for the purchase or rent of small plots of ground near the villages, built since Emancipation in various parts of the island, removes the temptation that might otherwise exist to appropriate portions of the unclaimed Crown lands.''

While agricultural labor in all the British West Indies is the great desideratum, and the cry for immigration is echoed and reechoed, it is amazing to see how the labor which the planter has within his reach in a wasted and frittered away how the particular population upon which the prosperity of the Colonies so utterly depends is neglected how, by mismanagement and unpardonable blunders of policy, the life of a field-laborer has been made so distasteful to the peasant that the possession of half an acre, or the most meager subsistence, with independence, seems to him, in comparison, the very acme of luxurious enjoyment.

African slavers have discovered a new way of reaching Cuba with their cargoes. A few weeks sicne, six hundred negroes were landed on Anguilla Island, one of the Bahamas, the slave ship burned to escape detection, and the cargo forwarded to Cuba, in two trips, by a schooner.

New York, February 28. -- A St. Thomas paper tells a story of the wreck of a Norwegian brigantine on the Anguilla reef during a gale, and when all on board, except the Captain and a boy, were down with the African coast fever. All were rescued, however, The Commander of the brigantine, with the aid of the boy, kept his vessel on her course for a month.

The Sugar Barons: Family, Corruption, Empire, and War in the West Indies

To Hell or Barbados: The Ethnic Cleansing of Ireland.

Sean O'Callaghan
More than 50,000 Irish men, women and children were transported to Barbados and Virginia. Sean O'Callaghan documents the history of these people: their transportation, the conditions in which they lived on plantations as slaves or servants, and their rebellions in Barbados. An illuminating insight into a painful episode in Irish history, but its significance is much broader than that. Its main achievement is to situate the story of colonialism in Ireland in the much larger context of worldwide European imperialism. O'Callaghan's description of seventeenth century Barbados is a powerful portrait of a society as brutal, corrupt and unjust as anything the twentieth century has to offer. A valuable book.""--Irish World

The Caribbean: A History of the Region and Its Peoples 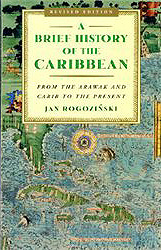 A Brief History of the Caribbean: From the Arawak and Carib to the Present

History of the Caribbean