Lists are incomplete; information is added as located and as time permits. 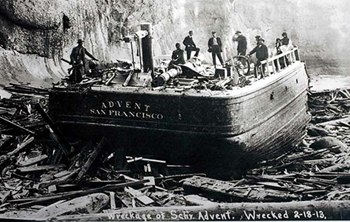 A photo of the San Francisco schooner Advent came from one of the 1,500 glass plate negatives that Steven Priske (author of Tall Ships of San Francisco) found in Oregon.

Maritime historians have long heralded the contributions of New York and Boston shipyards in designing and building more than 600 clipper ships, the world's fastest commercial sailing vessels. Early shipyards in Oakland and San Francisco were known mainly for producing delta scows and Redwood Coast schooners that hauled grain and lumber, and were not credited with launching any clippers.

But a Santa Rosa man says he has discovered evidence of photographs of 65 previously undocumented, West-Coast-built ships of sail, including a clipper ship that set world speed records.
Priske, a ship-model builder by trade, has written a book about the West Coast's early shipyards and highlighted his findings on the Web site TallShipsofSanFrancisco.com.

Priske discovered several West-Coast-built ships that were the first of their kind to be built anywhere in the world. He said he also "discovered the last clipper ship built in the United States, and possibly the fastest clipper ship ever built."

Many historians have assumed that the West Coast had no shipyards capable of building clipper ships . . . When living in Coos Bay, Oregon, a woman saw him on a local TV show and called to tell him that she had a garage full of maritime photographs . . . "I thought she was referring to a box of paper photographs," Priske said. He opened the box, and found seventeen wooden apple crates containing 1,500 glass plate negatives.

Between each plate were handwritten notes detailing the images. Priske had the negatives scanned digitally, transcribed the photographer's notes, and discovered that the materials covered a span from 1859 to 1920, when West Coast shipyards produced tall sailing ships.
David Hull, principal librarian for the San Francisco Maritime National Historical Park, has credited Priske as uncovering "important (research) primary materials" . . . Historians credit an East Coast yard as producing the last clipper ship in 1870, the Great Republic, built in East Boston by the famous builder Donald McKay. But according to Priske's research, at least one full-fledged clipper ship -- the Western Shore, built in 1874 -- was produced at Coos Bay for Simpson Brothers Lumber Co. of San Francisco.

Priske said it took a year to convince a Web site on clipper ships that is run by McKay's great-grandson -- EraOfTheClippers.com" -- to concede that the Western Shore was truly a clipper ship.

Asa Meade Simpson of Oakland and his four brothers owned several lumberyards and a large floating dry dock on San Francisco Bay as well as shipyards at Coos Bay and Gray's Harbor, Wash. According to Priske, the Simpson brothers built 65 tall ships.

"Although not rigged as clipper ships, 30 of the Simpsons' blue-water sailers had hulls that were comparable to the finest clipper ship hulls launched on the East Coast . . . the Simpsons' tall ships also included the world's first five-masted schooner, the Louis (1888), and the world's first four-masted bald head schooner, the Novelty (1886). Such ships had a much taller mainsail than a traditional schooner.

Capt. Simpson's grandson, Michael Simpson of Sacramento, provided Priske with a copy of the actual blueprints of the Western Shore -- which were hand-drawn on onion skin and stretched out more than 17 feet. "The Western Shore turns out to be the last clipper ship built anywhere in the world," Priske said. The ship hauled wheat to Liverpool, England, and returned with coal, he said.
Of its four journeys to England, Priske said, three were record setting -- including a 97-day voyage from Astoria, Ore., to Liverpool. "It was the unique hull and rigging design of the Western Shore that gave her such fast sailing qualities," Priske said. In 1878, the Western Shore ran aground on Duxbury Reef near Bolinas, and sank within four hours . . .

Montague Dawson, the painter of Ariel and Taeping (above), was the son of a keen yachtsman and the grandson of the marine painter Henry Dawson (1811 1878). Dawson was born in Chiswick, London in 1895. Much of his childhood was spent on Southampton Water where he was able to indulge his interest in the study of ships. For a brief period around 1910 Dawson worked for a commercial art studio in Bedford Row, London, but with the outbreak of the First World War he joined the Royal Navy. While serving with the Navy in Falmouth he met Charles Napier Hemy (1841 1917), who considerably influenced his work. In 1924 Dawson was the official artist for an Expedition to the South Seas by the steam yacht St. George. During the expedition he provided illustrated reports to the Graphic magazine.

Dawson's paintings are included throughout this site to illustrate these exquisite ladies of the sea.

Snow Squall: The Last American Clipper Ship
Nicholas Dean's book is a series of volunteer archaeological expeditions in the aftermath of the Falkland War.

Her world turns out to be a fascinating one, from the laying of her keel to her captain's heroic efforts to repair his badly damaged ship after going aground near Cape Horn in 1864.