During 1852, 95 clipper ships along with ten clipper barques sailed from northeastern ports around the Horn for San Francisco.

This remarkable contest has been described by the historian Carl C. Cutler inآ Greyhounds of the Sea. the Story of the American Clipper Ship

(with 500 sailing records)آ ,آ as representing "the very crest of the clipper wave."

There to greet her in San Francisco Harbor, was theآ Westward Ho,آ another McKay clipper that had been launched on September 24, 1852. Theآ Westward Hoآ had entered the Deep Sea Derby sailing from Boston twenty-two days after her launching on October 16, 1852, fifteen days before theآ Flying Fish;آ to chase after theآ Dauntlessآ that had cleared Boston Harbor the day before on her maiden run to the Golden Gate, the same day theآ Flying Dutchmanآ departed New York.

Theآ Westward Hoآ had sailed around the Horn in 107 days arriving at the Golden Gate only a few hours before theآ Flying Fish,آ and her crew was rolling up her canvas as theآ Flying Fishآ arrived.

Yesterday the beautiful clipper shipآ Wild Pigeon, Captain Putnam, hauled out of her berth, at the foot of Wall Street, and sailed for California. The barkآ Salem, Captain Millet, also cleared yesterday for the same destination. Both vessels have large and valuable cargoes. The agent of the first named vessel had to refuse some one thousand barrels, for want of room. TheWild Pigeonآ has only been in port twenty-nine days, and in the short space of twenty-eight working days discharged and received cargo, and is now again on her way to the Pacific.

On the other side of the slip, just evacuated by theآ Wild Pigeon, lies the Boston Clipper ship Flying Fish, Captain Nickels, also taking cargo for San Francisco. She arrived here some three weeks back, from Manila, and it is her first appearance in this port. She is of a similar model to the celebrated clipper shipآ Flying Cloud, and both constructed by the same builder (Mr. Donald McKay of East Boston) but has sharper ends, and is stated to be the sharpest vessel he ever launched. Like all clipper ships, she is filling fast, and will leave on or about the 23rd inst.

Independent of the above, there are seventeen other vessels up for the same port. Among these are the following beautiful new clippers yet untried: Theآ Flying Dutchman, Contest, John Gilpinآ andآ Tinqua. The first two were built in this city قآ The Flying Dutchmanآ by Mr. W. H. Webb, the other by Messrs. Westervelt & Sons; theآ John Gilpin, by Mr. Samuel Hall, of East Boston. Theآ Tinquaآ was constructed by Mr. George Raynes, of Portsmouth, N. H.. She had not yet arrived here, but will make her appearance shortly, to commence loading in Mr. John Ogden's line of clippers, to which theآ Wild Pigeonآ and theآ Flying Fishآ also belong.

The other clippers also loading here for San Francisco are theآ Game Cock, Grey Featherآ andTradewind,آ all first class vessels. The freighting business for California is at present very active, several of the new clippers having had a portion of their cargo engaged before they appeared at their berths. The clearances at this port for San Francisco, during the month of October, give one for every alternative day; ad from the first of last month up to the present date, the number amounts to twenty, including the clipperآ Comet, and other first class ships. The whole number from all our Atlantic ports during that period is thirty-six; which shows the great preponderating commercial enterprise of New York, over all the other commercial cities of the Union combined.

The passages of our clipper ships have got to be so regular, that if the day of their departure from either Boston or New York be known here, their arrival can be calculated at this season of the year with a good deal of precision.

This fact is fully illustrated by the last passages of theآ Game Cock, 115 days from New York, theآ Telegraph, 115 days from Boston, theآ Meteorآ 100, and theآ Whirlwindآ 111 from the same place. Two of these ships came around by the new route, and laid down by Lieut. Maury, of the observatory at Washington, and tends greatly to recommend the adoption of that course instead of the old fashioned way of forelaying the northeast and southeast trades in the Atlantic ocean. In times gone by, when ships sailed about as fast as one could "whip a bug over a tarry shingle," it was very necessary to forelay, and if possible, get so far over to the European and African shores as to make sure of getting the wind abaft the beam after passing the latitude of 22 degrees north, and keeping it to 26 degrees south of the line, but now, since the introduction of improvements in ship building, and sparring, that a ship can make nearly as much headway close-hauled as she can on any other tack, and sail much faster with a beam wind, hundreds if not thousands of miles are saved by the direct course. It also exhibits a great amount of nautical skill and capacity to perform these voyages with such extraordinary regularity; for it proves that it is the result of science put into practice, and not of chance. It is highly probable that both of the other ships above mentioned took the same course.

Queen of the Seas

Sovereign of the Seas

The Cutty Sark and Thermoplye 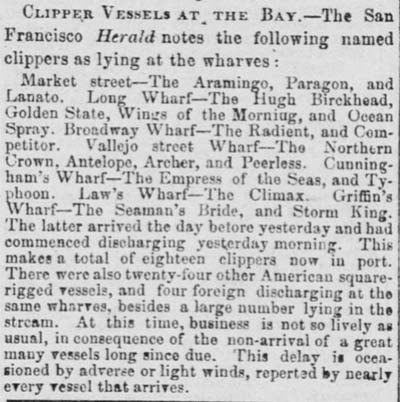 Clippers were built for speed. This was not the only time they raced. Theآ Cutty Sarkآ andThermoplyeآ raced from the docks of Hongkew at Shanghai with 1,196,400 and 1,303,000 pounds of tea respectively. These were lighter loads than they would normally carry as "the race was on."

"As soon as the cargo came down, each ship became surrounded by tea lighters, for they were loaded in the stream. Sweating coolies, standing on stages, rigged along theآ Cutty Sark'sآ black and the Thermopyle'sآ green sides, hove the chests aboard to their mates in the holds amidst a continual sing-song of guttural Chinese chanting.

It was hot, steamy, S.W. monsoon weather, with sharp bursts of rain alternating with a damp fog, so that sail bending was left to the very last moment.

Cutty Sarkآ was the first to finish loading, the last chest being hurled aboard on the afternoon of June 17th. She got under way at 7 p.m. and dropped down as far as Halfway Point, where she had to bring up for the night.

Thermopyleآ put the tarpaulins on her hatches some time after dark that same night. The Woosung bar was crossed by both vessels the following morning, Cutty Sark being in the lead, and the beautifulآ Sir Lancelot, on her way to load at Foochow, was also in company.

If you cannot find your preferred books locally, please consider utilizing links provided to Amazon.com, which has proven to be reliable on service and delivery.

Timothy G. Lynch
Beyond the Golden Gate: A Maritime History of Californiaآ is the first book-length treatment of California's connection to the sea. Noted maritime historian Timothy Lynch looks at the history of the Golden State through the prism of the maritime world: how the region developed and how indigenous people interacted with the marine ecosystem. And how they and others - Spanish, English, Russian, American - interpreted and constructed the oceans, lakes and river networks of the region.

Written as part of a project with the National Park Service and the Organization of American Historians, Beyond the Golden Gateآ is an immersive look at the maritime history of California that will inspire additional scholarship in this overlooked but critically important field. Benefitting from hundreds of primary sources, dozens of captivating images and reflective of the latest trends in the field, Beyond the Golden Gate is sure to satisfy the curious reader, the serious historian, and the maritime aficionado.

This comprehensive reference book on the discovery and recovery of underwater archaeological remains around the world was directed by noted author and diver James Delgado, along with archaeologists and scientists who have made the discoveries.

It offers a wealth of authoritative and accessible information on shipwrecks, drowned cities, ritual deposits, and other relics of our submerged past. Published in association with the British Museum Press.

X Marks the Spot: The Archaeology of Piracy
(New Perspectives on Maritime History and Nautical Archaeology)

Prof. Rusell K. Skowronek, Editor, Charles R. Ewen, Editor
A collection with historical evidence about the actual exploits of pirates as revealed in archaeological records. The recent discovery of the wreck of Blackbeard'sآ Queen Anne’s Revenge, off Beaufort Inlet, North Carolina, has provoked scientists to ask, "What is a pirate?

Were pirates sea-going terrorists, lawless rogues who plundered, smuggled, and illegally transported slaves, or legitimate corsairs and privateers?" Highlighting such pirate vessels as theآ Speaker, which sailed in the Indian Ocean, and theآ Whydah,آ the first pirate ship discovered in North America (near the tip of Cape Cod), the contributors analyze what constitutes a pirate ship and how it is different from a contemporary merchant or naval vessel.

"In the 21st century the division between the maritime and terrestrial worlds has virtually disappeared. Events and issues that previously involved only maritime subjects need to be reexamined today from the perspective of those events and developments occurring simultaneously ashore. It is through this approach, as demonstrated by this fine collection of essays, that maritime history becomes a vehicle for understanding global history."

Essays by leading scholars present an up-to-date assessment of the field of maritime history in the early 21st century, offering fresh insights into the impact of seaborne exploration, warfare, and commerce on the course of history, from the independent traditions of ancient Japanese, Arab, and Mediterranean seafarers to the rapid European expansion around the globe from the 16th century onward.

Alexis Catsambis
A comprehensive survey of the field as seen through the eyes of nearly fifty scholars at a time when maritime archaeology has established itself as a mature branch of archaeology. This volume draws on many distinct and universal aspects of maritime archaeology, bringing them together under four main themes: research process, ships and shipwrecks, maritime and nautical culture, and issues of preservation and management.