(Note: Confusion in news articles between John C. and J. B. Blethen; the first initial and/or name is often missing. Because of that, listings for John C., John B. and Blethen on the ships Columbus, America, and the John Currier are listed under both names.)

In 1876, John C. Blethen shipped out as mate on the Peru and later made one voyage as her master.

Subsequently he commanded the Columbus for five years (1874-1879 est.), during which time he sailed from New York to San Francisco four times.

SHIP COLUMBUS, Capt. J. B. Blethen, from New York. All claims against this vessel must be presentd (in duplicate) at the office of the undersigned on or before Saturday, March 27, 1875, or they will not be allowed.

He then commanded the America for three years (1878-1881 est.); he was noted in a list of vessels on the way to San Francisco: October 3, 1878, Daily Alta Calfiornia: Sailed from New York July 23,America, Blethen, 72 days from New York

Ship America, Capt. J. B. Blethen, from New York, will commence discharging on Friday, February 27, 1880, at Greenstreet wharf. Consignees will please call at the office of the undersigned , pay freights and receive their orders. All merchandise when landed on the wharf will be at the risk of the owners thereof (without regard to weather), and if not removed before four o'clock P.M. of each day, will be stored at thier risk and expense. 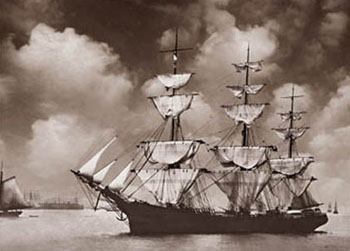 Captain Blethen was one of the owners of the John Currier, along with Frank N. Thayer and William Henry Lincoln (Thayer & Lincoln), who owned a ship chandlery business on Lewis Wharf in Boston. They established a line of sailing ships, some of which were built at Newburyport, Mass and Kennebunk, Maine, and acquired others by purchase.

The last ship they launched was theJohn Currier, at 235:8 feet, 1848 tons, from Newburyport, Massachusetts in October 1882. She cost $120,000 and was the last wooden ship to leave the stocks in any Massachusetts shipyard.

The first two voyages of the John Currier were between Atlantic ports and San Francisco, then she engaged in trade with China and Japan. She was a troubled ship, with mishaps, fires and a tornado in Hong Kong.

Ship John Currier, Captain J. B. Blethen, from New York. All claims against this vessel must be presented (in duplicate) at the office of the undersigned on or before Wednesday, April 25th, 1888, or they will not be allowed.

Ship John Currier, Captain J. B. Blethen, from New York, will commence discharging on Monday, April 9th, 1883, at Green-street Wharf. Consignees will please call at the office of the undersigned, pay freight and recieve their orders. All merchandise when landed upon the wharf will be at the risk of the owners thereof, without regard to the weather, and if not removed before 4 o'clock P.M. of each day, will be stored at their risk and expense.

It will be seen by the telegraphic dispatches in another column that another ship has been set on fire by spontaneous combustion of bituminous coal. The ship John Currier from Liverpool, arrived yesterday at San Francisco, loaded with coal for Wilmington. The coal was discovered to be on fire on August 27th, and could uot be subdued till September 6th, when the Captain, after throwing 250 tons of coal overboard decided to put into San Francisco for repairs, thinking they could be better and more cheaply done there than at San Pedro, This is the second ship on fire bound for our port of San Pedro during the last month. There are now ten huge ships lying at San Pedro, and the Currier makes eleven that are to unload and load at this port.

VALOR REWARDED.
The Board of Underwrlters Present a Gold Watch to Captain Bromley.

On the 29th of September the American ship John Currier, Captain Blethen, arrived in this port 130 days from Liverpool, having had a fire burning in her cargo of coal for upwards of a month. The British ship Cressington fell in with the Currier and accompanied her to to this port, staying by her for thirty days. During the time the wife of Captain Blethen, and his personal effects, together with those of his officers, were transferred to the Cressington, as it was believed that the fire would not be controlled before this port was reached.

In recognition of the services extended by Captain Bromley, of the Cressington, the Board of Marine Underwriters, of San Francisco, yesterday presented him with a valuable gold watch and chain, suitably inscribed, together with the accompanying testimonial. Captain Bromley's ship sails to-day for Liverpool, loaded with wheat. The testimonial is as follows:

Capt. John Bromley of the British ship Cressington Dear Sir: On your voyage from Cardiff to this port in August of the present year, you fell in with the American ship John Currier, Capt. Blethen, coal-laden, and bound, like your own vessel, for this port. The John Currier was on fire when you spoke her. You boarded her and took off the Captain's family, entertaining them hospitably and in safety for thirteen days; you tendered the assistance of your crew to the Currier to aid in extinguishing the fire, and remained by her many days -- while her crew were battling with the flames. Owing to your presence the ship's company of the Currier were enoouraged to continue their severe labors instead of abandoning the ship to the flames, whereby the fire was extinguished and the vessel and cargo were ultimately saved. Under circumstances of international courtesy like these, and in the absence of any United States law securing the recognition of alien services to national vessels, the Underwriters of San Francisco feel that they cannot allow you to leave port without a suitable acknowledgment of your gallant assistance to an American vessel in distress, and thanking you not only for your kindness to Captain Blethen and his family, but for the valuable service you have rendered in preventing the total loss of the endangered property, we therefore beg your acceptance of the accompanying watch and appurtenances. And wishing you, dear sir, on behalf of our Underwriters, many years of health and prosperity, and the highest honors in your noble profession, I am, very truly yours,

She pulled through all and Captain Blethen continued sailing her until he retired in 1888.

The ships Argo and John Currier went yesterday up to Port Costa to load wheat. The ship C. F. Sargent, 1,704 tons, has been chartered to load wheat to Cork, U.K. or Antwerp at 39 shillings, and the John Currier, 1,847 tons, for the same votage at the same rate.

Am. Sp. John Currier, Blethen, Master, will commence discharging on Friday, August 6th, at 7 A.M. at Seawall, section 4. Consignees will please call at the office of the undersigned, pay freight and receive their orders. All merchandise when landed on the wharf will be at the risk of the owners thereof (without regard to the weather), and if not removed before five o'clock P. M. of each day, will be stored at their risk aad expense.

American Sp John Currier, Captain Blethen from Hongkong. All claims against this vessel must be presented (in duplicate) at the offlce of theundersigned on or before Saturday, August 28, 1886 or they will not be allowed. MACONDRAY & CO.

Via "Electric Telegraph," the Press Association of the Bush Advocate in Putanga, Mahuru, New Zealand reported the American ship John Currier wrecked in 1907 at Bristol Bay, Alaska. TheThetis, a revenue cutter, rescued 242 survivors and conveyed them to Seattle.