SHOOK HIGH'S HAND
Marquis and Merchants Meet at the Chamber of Commerce.
FIELD MARSHAL'S SPEECH
Eloquent Pledges of Amity Between the United States and Japan.

The Marquis Field Marshal Yamagata of Japan was the distinguished guest of the Chamber of Commerce yesterday afternoon. A reception given in his honor was attended by 150 citizens of San Francisco, many of whom were representative merchants and professional men. At the platform the flags of the United States and Japan were joined. 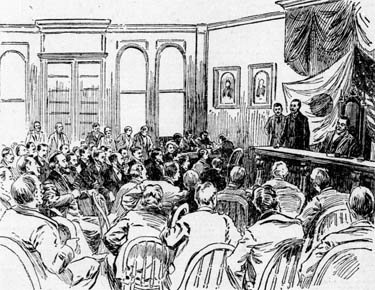 Hugh Craig, vice-president of the chamber, introduced the guest, speaking as follows:

During the history of the San Francisco Chamber of Commerce its members have had the privilege and pleasure of tendering the courtesies of the City to distinguished statesmen and Generals of other nations, and it is fitting that at this meeting place of the Occident and the Orient such courtesies should be extended to distinguished guests.

We have with us today a gentleman who represents in a marked degree the old and new condition of affiars in that great nation which has, by force of nature, placed itself in the front rank of the great nations of the earth.

When our Commodore Perry gave the right hand of fellowship to the Japanese Government forty-two years ago, the American people undertook the responsibility of fathering this new nation into the general family, and with what success, a careful examination of natonal events on the other side of the Pacific will show.

A recent report issued by the Yokohama Chamber of Commerce sets forth that out of $123,000,000 of the foreign trade of Japan for the year 1894, $41,000,000, or one-third, was with the United States, and this Chamber of Commerce only voices the sentiments of the people of California and the United States at large in the desire to cultivate the further extension of such intimate relations.

Our honored guest comes to us as a broad-minded statesman, a trusted councilor and a victorious general, and to him, in the name of the City of Francisco and the State of California, we tender our best wishes for a safe and prosperous journey to his destination at Moscow, a safe return to his home in Japan, and that he will convey to the Emperor of Japan and his people our best wishes and highest regards for the prosperity and growth of their country.

Marshall Yamagata responded to the greeting, speaking the Japanese language. The speech was repeated in English by the interpreter. He spoke as if the Marquis himself were speaking and expressed unmixed joy and satisfaction over the hospitable and kind reception accorded, and accepted the demonstration as another proof of the comity and courtesy existing between Japan and the United States.

"Neighbors as we are it is but natural that we hail you as the harbinger of civilization. History throws more vivid light on this friendship and development than my words can express. I can assure you that sentiments of sympathy and admiration for Americans have been awakened in Japan. I feel sure that the triple ties of history, neighborhood and sympathy will keep alive the cordial amity which has so long existed. Of the high eulogistic term in which your president has spoken of me personally, I can say that I do not merit the eulogy, but the friendly and hospitable sentiment so expressed for Japan by Mr. Craig are reciprocated. In thanking you once more let me assure you that in leaving you I take the most agreeable souvenirs of the hospitality and courtesy of the people of California."

The speech of the Marquis as interpreted by his accomplished interpreter was greeted with the warmest applause. The president then introduced George W. McNear, but the grain merchant asked to be excused from making an address, and the excuse was granted.

The next speaker introduced was Saburo Koya, the Consul of Japan in this City. He responded, expressing thanks for the honor conferred in being requested to address an audience of San Francisco merchants. He referred to the kindness which Japan entertained for the United States and said that the sentiment of admiration for America was understood and appreciated by the Japanese schoolboy. He assured his listeners that Japan would continue to be the friend of America. He hoped that the ties of friendship which joined the two countries together would never be broken. He spoke of Commodore Perry, and said his visit enlightened Japan, not for America alone, but for all the world.

At the conclusion of the Consul's, remarks Mr. Craig invited the merchants and others present to come forward and receive introduction to the Marquis Yaragata. A line was formed and in turn each comer grasped the hand of the Field Mrshal.

Among the representative citizens attending the reception were:

The Marquis and his suite will bid adieu to San Francisco next Monday and proceed on the journey to Moscow to attend the coronation of the Czar.

آ
Note: This is a reproduction of a book published before 1923. This book may have occasional imperfections such as missing or blurred pages, poor pictures, errant marks, etc. that were either part of the original artifact, or were introduced by the scanning process. Such works are culturally important, and despite the imperfections, they are being brought back into print.