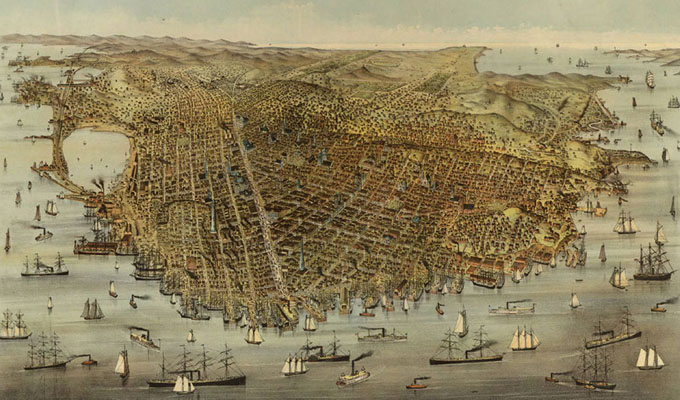 Original Owner: Edward Mills, who was also superintendent of construction.

Hull: White oak, live, oak, locust and cedar. She had two decks, two masts, round stern, and a sharp bow with a short bowsprit. Her main salon was 70 feet long with 12 staterooms on each side, and she had berths for 365 passengers.

Note: The following article from the Daily Alta California was located and transcribed by John Ireland, noted for his research on passengers leaving New York for San Francisco.

-- A private letter from Edward Mills, Esq., of New York, speaking of the new and magnificent steamship Brother Jonathan, which is now preparing to sail for this port, says: She is one of the finest steamers ever built here and is equal to any other in point of speed - she has fine lines and great power - no boat has so much in proportion to her size. Her dimensions are 220 feet keel, 36 feet beam, 21 feet deep - solid floors, iron diagonal braces from coaged and kelson. In fact, she is as strong as wood, iron and copper can make her, and will only draw on the river 8 1/2 feet. Her cabins are well ventilated for warm climates, and the saloons finished with white enamel gold. The engine is 72 inch cylinder, 11 feet stroke, flue boiler 12 feet schell and 28 long; wheel 33 feet in diameter, 9 feet face, 30 inch bucket and 4 feet dip. She is the same power as the celebrated steamers Oregon, Vanderbilt and Bay State, and I know no reason why she should not have nearly even speed. I think she is worthy of the regards of the Californians.

The Brother Jonathan, from all we can learn, is superior in point of comfort to any vessel yet launched for this trade, and was built under the direction of E. Mills, Esq., her owner.

Se sailed between New York and Chagres in 1851 and 1852. In 1852 she was sold to Cornelius Vanderbilt who rebuilt her, extending her capacity to 750 passengers, then cleared New York for San Francisco on May 14, 1852 to become one of Vanderbilt s San Francisco -- San Juan del Sur ships. She was under the command of Captain James Henry Blethen, Sr. during part of this time.

We understand that the representatives of the Nicaragua Republic have decided to make the purchase of the Brother Jonathan, provided she will hear the inspection to which she will be submitted by a competent committee upon her arrival from the upper coast whither she went a few days since. We learn from Col. Kewen that he has had ten thousand applications from persons anxious to join the expedition, but are deterred from going for want of a suitable means of transportation. If the Government can succeed in obtaining a steamer the desires of these applicants can be gratified.

On April 22, 1858, the big side-wheeler Commodore steamed out through the Golden Gate bound for Victoria on Vancouver Island. Crowding her decks were eager prospectors, with visions of Fraser River gold. In Blacks in Gold Rush California, Rudolph M. Lapp wrote: On this voyage one group of passengers had mixed reasons for leaving California. Two hundred and fifty African American men, women and children had booked passage that April 22nd, anticipating the economic opportunities the latest Western mining rush had to offer, and leaving behind what they regarded as a state with a troubled racial climate. California's state legislature seemed to be moving rapidly toward passage of a law restricting Negro immigration. The more congenial racial climate of British Columbia, along with economic opportunities associated with the Fraser River gold rush, swayed opinion in favor of Canada. The majority of the 250 voyagers on the Commodore came from San Francisco, but a fair number came from Sacramento and other Central Valley communities as well. Other African-Americans followed in the Commodore's wake, despite the fact that the anti-immigration bill failed.

The Brother Jonathan was subsequently sold to Captain John T. Wright and the California Steam Navigation Company and extensively rebuilt at San Francisco in 1861. Captain Wright renamed her the Commodore and sailed her between San Francisco and Seattle.

Sailors say it is bad luck to rename a ship, and indeed, even though her name was changed back to Brother Jonathan soon after that voyage, her sailing days ended in one of the worst disasters in California Maritime history when the 1,359 ton steamship sunk on July 30, 1865 under Captain Samuel de Wolf's command. Ignoring Captain de Wolf's desires, shipping agents severely overloaded the vessel. Enroute to Portland from San Francisco she struck St. George Reef (near Crescent City) and sunk, taking at least 166 persons with her to the bottom.

Editor's Note: The following was received June 1, 1999 from Bob Smith, author, Maritime Museums of North America Including Canada and editor of a World Wide Maritime Museum Websites (which seems to longer exist as of 2012).

I was particularly interested to see if you may have included the ill-fated Brother Jonathan in your listings. And, of course, you have. My interest stems from a little article I wrote a few years ago about one Victor Smith who, in 1865, "stole" the customs house in Port Townsend (WA) and transferred to the community he created 40-or-so miles west called Port Angeles. There's more to the story but suffice to say, Victor and his arch enemy in Port Angeles were both aboard the Brother Jonathan when she sank -- and died.

And now, Deep Sea Research (DSR) has successfully prevailed in legal actions started by the State of California claiming that the State owned the wreck found by DSR. Not so, says the Supreme Court. So the salvage has begun including the sale, just last week (5/20/99) of one artifact for $100,000 which will be displayed by the new owner. But more important, DSR is making it possible for all to become much more familiar with this shipwreck, its passengers where only about 19 survived of the over 200 on board, and all about the vessel itself.

Treasure from ship goes on block

Shipwrecks combed by salvagers in American waters have traditionally yielded treasures of coins struck in South America. Central America and Europe. But when the SS Brother Jonathan went down off Crescent City, Calif., in 1865, it was carrying gold coins struck in the San Francisco Mint.

The ship made regular runs up and down the coast and was headed north from San Francisco in late July. Seeking refuge from storms in Crescent City, the ship spent a day in port but struck a rock and sank quickly just outside the harbor as it left Crescent City.

When divers finally located the ship's remains, they recovered more than 1,200 gold coins, some in mint-like condition. The coins were offered for auction in May of 1999 at the Airport Marriott Hotel in Los Angeles by Bowers and Merena.

When divers finally located the ship's remains, they recovered more than 1,200 gold coins, some in mint-like condition. The coins were offered for auction in May of 1999 at the Airport Marriott Hotel in Los Angeles by Bowers and Merena.

Timothy G. Lynch
Beyond the Golden Gate: A Maritime History of California is the first book-length treatment of California's connection to the sea. Noted maritime historian Timothy Lynch looks at the history of the Golden State through the prism of the maritime world: how the region developed and how indigenous people interacted with the marine ecosystem. And how they and others - Spanish, English, Russian, American - interpreted and constructed the oceans, lakes and river networks of the region.

Written as part of a project with the National Park Service and the Organization of American Historians, Beyond the Golden Gate is an immersive look at the maritime history of California that will inspire additional scholarship in this overlooked but critically important field. Benefitting from hundreds of primary sources, dozens of captivating images and reflective of the latest trends in the field, Beyond the Golden Gate is sure to satisfy the curious reader, the serious historian, and the maritime aficionado.

This comprehensive reference book on the discovery and recovery of underwater archaeological remains around the world was directed by noted author and diver James Delgado, along with archaeologists and scientists who have made the discoveries.

It offers a wealth of authoritative and accessible information on shipwrecks, drowned cities, ritual deposits, and other relics of our submerged past. Published in association with the British Museum Press.

X Marks the Spot: The Archaeology of Piracy
(New Perspectives on Maritime History and Nautical Archaeology)

Prof. Rusell K. Skowronek, Editor, Charles R. Ewen, Editor
A collection with historical evidence about the actual exploits of pirates as revealed in archaeological records. The recent discovery of the wreck of Blackbeard's Queen Anne’s Revenge, off Beaufort Inlet, North Carolina, has provoked scientists to ask, "What is a pirate?

Were pirates sea-going terrorists, lawless rogues who plundered, smuggled, and illegally transported slaves, or legitimate corsairs and privateers?" Highlighting such pirate vessels as the Speaker, which sailed in the Indian Ocean, and the Whydah, the first pirate ship discovered in North America (near the tip of Cape Cod), the contributors analyze what constitutes a pirate ship and how it is different from a contemporary merchant or naval vessel.

"In the 21st century the division between the maritime and terrestrial worlds has virtually disappeared. Events and issues that previously involved only maritime subjects need to be reexamined today from the perspective of those events and developments occurring simultaneously ashore. It is through this approach, as demonstrated by this fine collection of essays, that maritime history becomes a vehicle for understanding global history."

Essays by many of the world’s leading scholars present an up-to-date assessment of the field of maritime history in the early 21st century, offering fresh insights into the impact of seaborne exploration, warfare, and commerce on the course of history, from the independent traditions of ancient Japanese, Arab, and Mediterranean seafarers to the rapid European expansion around the globe from the 16th century onward.

Alexis Catsambis
A comprehensive survey of the field as seen through the eyes of nearly fifty scholars at a time when maritime archaeology has established itself as a mature branch of archaeology. This volume draws on many distinct and universal aspects of maritime archaeology, bringing them together under four main themes: research process, ships and shipwrecks, maritime and nautical culture, and issues of preservation and management.