The Andaman and Nicobar Islands are an archipelago located east of India in the Bay of Bengal.

A clear history of the Andaman and Nicobar Islands can be had only from a British Survey of these islands conducted in 1777.

It's recorded that Marco Polo was the first official visitor to the beautiful Andaman and Nicobar islands, a tropical archipelago of 572 islands covered in dense forest and white sand beaches. Isolated in the Indian Ocean and little known in the western world, these islands (a territory of India) are covered by tropical rain forests and only a handful of them are inhabited.

The Andaman and Nicobar Islands remained the abode of the Negritos and the Mongols, who occupied the Islands for centuries.

These islands remained secluded from the mainland till the end of the 18th Century when people from the outside world first arrived.

The history of these islands can be divided into four broad periods the period of seclusion and piratical disturbances:

In the Second Century, the Andaman and Nicobar Islands were located in the maps prepared by the great Greek astronomer, mathematician and geographer, Claudius Ptolemaeus, which possibly is the earliest reference to these islands.

A Native of Andaman Islands

The early history of Nicobar is not well known although these islands were familiar to traders in ancient times, the islands being situated close to the trade route to the Far East. Though little is known about Portuguese activities in these islands, it is evident that the Portuguese missionaries started preaching Christianity among the islanders. The Nicobarese language also reflects a few Portuguese words.

In 1875, the Royal Society equipped an expedition to the Nicobar Islands for the purpose of observing the total solar eclipse of that year. The station was the Island of Camorta because it was near the line of greatest totality, and at the same time "the fact of its being a penal settlement enabled the observers to have the benefit of convict labour."

A BRIEF ACCOUNT OF THE NICOBAR ISLANDS
with special reference to the Inland Tribe of Great Nicobar
By E. H. Man, F.R.G.S., &c., 1886
Royal Anthropolical Institute of Great Britain and Ireland

The Nicobar group, situated in the Bay of Bengal between the 6th and 10th parallels of N. lat., comprises twelve inhabited and a few uninhabited islands and islets whose entire area is estimated to contain about 738 square miles, nearly one-half of which is included in Great Nicobar . . .

It had been long more than suspected that the natives in the vicinity of Nancowry Harbour had at intervals from 1839 (if not even prior to that date) committed a series of unprovoked murders and outrages on the crews of vessels visiting these islands for purposes of trade, many of their victims being under the protection of the British flag.

It was not, however, until 1867, when a flagrant case was brought prominently to the notice of the Straits Government, that the authorities decided to deal summarily with the miscreants.

An expedition was accordingly despatched consisting of two gunboats (Wasp and Satellite) with instructions to visit the suspected villages and, after inquirey into the circumstances, to take fitting steps for the prevention of a recurrence of such atrocities. As a result of the investigation, two or three only of the accused offenders were captured and conveyed to Penang . . .

The People of the Nicobars.

At the meeting of the British Association on August 9, in the Anthropological Section, Mr. E. H. Man explained the use of narcotics among the Nicobar islanders. The habit is common among many of the races of Transgangetic India and the Archipelago of taking frequent quids of betel nut and quicklime throughout the day. So firm a hold has this practice on both sexes that "betel-quidding-time" is a recognised expression signifying an interval of some fifteen minutes' duration.

Betel chewing is commenced at the early age of ten or twelve, but instances are by no means rare of children who have acquired the habit before attaining six and even four years of age. It is but fair to add that this infantile precocity is not encouraged by the parents. Among the supposed benefits resulting from the custom are preservation of the teeth and mitigation of the attacks of malarial fever which is so prevalent in these islands.

Strange as it may appear, the sense of taste does not appear to be vitiated in the slightest degree, nor is the appetite impaired. The intentional staining and unintentional dental deformation which this habit produces in a few weeks, under certain conditions, were explained, and the misstatements due to misapprehension of the real facts of the case which are found in earlier accounts of these islanders were noted. Cranial and facial deformations are considered by the natives of the central and southern communities to be of the highest importance, and to the production of them the Nicobarese mother devotes much care and attention during the first two years or so of a child's life; but it is satisfactory to note that the method cannot cause the little one even momentary discomfort.

Betel has been called "the daily social lubricant of Southeast Asia."

Betel chewing was widespread in South India and South China by the 15th century, but it appears to have originated in Southeast Asia, where the areca nut and the piper betel leaf grow naturally. The nut is the fruit of the areca palm (areca catechu). It is chewed together with a leaf of the betel piper vine (Piper betel) from which the name comes. The nut is cut into segments dabbed with lime (which is ground and burnt sea-shell), mixed with some water or oil and wrapped in a leaf to form a quid, the chewing of which produces blood-red spittle. Most of the men, especially the older ones, chew betel constantly. The belief is that the chewing of betel staves off hunger and tiredness as they work long hours in their fields. 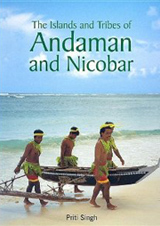 About the Nicobar Islands

Spice: The History of a Temptation