Madagascar, the world's fourth-largest island (more than twice the size of Great Britain), is located in the Indian Ocean off the coast of Mozambique. It was a natural port for seafarers sailing from Africa or Indonesia, and it was a challenging port for traders as every year cyclones roar through, causing extensive damage.

Madagascar was also an early port for pirates because of its distance from Europe and the absence of a significant naval power. The favorite hunting grounds of privateers were in the Arabian Sea and Red Sea areas, but Madagascar was a popular hiding place for recuperating and replenishing supplies for another attack.

Madagascar became a source of slaves, not only for the neighboring islands of Mauritius and Rodrigues, but also for more distant points, including the Western Hemisphere.

Europeans sighted the island in the 1500s, but paid scant attention until Portuguese missionaries tried to establish Christanity in the the 17th century, and both Britain and France followed with attempts to establish settlements.

Oddly, unless a reference book contains scientific references or is actually a scientific journal, little is written about the flora and fauna of islands as exotic as is Madagascar.

One of the sublime reasons for travelling the world is to see things you would never seen at home. Madascar is home to strange creatures such as leaf-tailed geckos, fanalokas, mongoose, tenrecs, and several types of lemurs: dwarf, indri (large and black and white), weasel, bamboo, mouse, aye-ayes (nocturnal), a beautiful creamy-white "dancing" Verreaux's sifaka . . . and about half of the world's 150 species of chameleons (including stunning Jeweled Chameleon's) and more than 300 species of frog. It is home to baobab trees and chocolate fruits from a Theobroma Cacao Tree. Sailors and passengers must have been overwhelmed, amused, and intrigued at every port o'call.

Two monarchs played key roles in establishing Merina political dominance over Madagascar. The Merina Nation of Madagascar is a "people of the nusantarian (malayo-indonesian) world." Andrianampoinimerina (r. 1797-1810), seized the throne of one of the Merina kingdoms in 1787 and by 1806 he had conquered the remaining three kingdoms and united them within the former boundaries of Imerina, the capital established at the fortified city of Antananarivo.

Radama I (r. 1816-28) succeeded to the throne in 1810 (at age 18) upon the death of his father. By playing off competing British and French interests in the island, he was able to extend Merina authority over nearly the entire island of Madagascar. With the help of the British, who wanted a strong kingdom to offset French influence, Radama I modernized the armed forces.

In 1817 the peoples of the east coast, facing an army of 35,000 soldiers, submitted with little or no protest; Radama then conquered the entire southeast as far as Tolagnaro. The ruling elite held all the land and monopolized commerce, except for the handful of Europeans allowed to deal in cattle, rice, and other commodities. Remunerations to the queen provided the French traders a supply of slaves and a monopoly in the slave trade. Enjoying particular favor owing to his remarkable accomplishments was French artisan Jean Laborde, who established at Mantasoa, near Antananarivo, a manufacturing complex and agricultural research station where he manufactured commodities ranging from silk and soap to guns, tools, and cement.

Particularly barren or impenetrable parts of the island escaped conquest, especially in the extreme south, but before his death, Radama I succeeded in bringing the major and more hospitable portions of the country under Merina rule. He did not quite extend the Merina ricefield to every shore of the island, but he won control over much of the island.

After agreeing to abolish the export of slaves and to accept a British agent at his court in Antananarivo, he received an annual subsidy, arms and ammunition, training and uniforms for his troops. A script was devised for the Malagasy language and printing introduced.

Upon his death in 1828, Queen Ranavalona took the throne and reversed his policies. Most of the Europeans were expelled, the newly baptized Christians were persecuted (and about 200 killed), and in 1835 the Christian religion formally banned. The reign of Ranavalona, characterized by rebellions, wars and brutality, ended with her death in 1861. Her son, Radama II, immediately opened the island again to European involvement. But within two years he was murdered in his palace - with the complicity of his wife, Rasoherina, who followed him on the throne.

For three decades Madagascar, or the greater part of it, was ruled by a succession of three queens, but the power behind the throne was a man as each queen in turn marries the same prime minister who then welcomes the Europeans back.

There are not less than 20,000 immediate descendants of the natives of Madagascar now living in the Mauritius, for the most part as free labourers. Their parents, thirty or forty years ago, were introduced as slaves, and continued as such till the period of emancipation, when, with the rest of the slaves, amounting to 80,000, they of course obtained their freedom. They are still regarded as natives of Madagascar, speak the language of that island, and are familiar with its customs. The other class consists of about 700 or 800 persons who have lately come there as emigrants from the coasts of Madagascar. The planters in the Mauritius were anxious to obtain additional labourers; for a time our Govemment prohibited their importation, but prior to the embargo, these 700 or 800 had been procured. The prohibition has since been removed: numerous vessels have gone to the coast of Madagascar for the purpose of conveying emigrants, and although the Queen has no t given her consent to their transit, vast numbers are willing to avail themselves of the opportunity of settling as free labourers in the Mauritius, and it is expected that some thousands will become reconciled there in that capacity. This large body of Malagasy beyond the power and threats and cruelty of the Queen, will come under the Christian instruction of our friends here and those who are already in the Mauritius. Those here are going forth as native teachers; not ordained missionaries. They will leave England under the care of Mrs. Johns, who is going to rejoin her hosband who has lately arrived in the Mauritius.

It now devolves on me to propose some few questions to our friends who are are present. I must enlist your sympathies on behalf of David, who has suffered in Madagascar on account of his profession of the name of Christ. He was compelled to forsake that land, leaving behind him his mother and his wife. They were not in personal danger at the time he effected his escape; but had he remained, there was every probability of his life being sacrificed. His wife, however, was ultimately apprehended, and we have received intelligence of her having been speared to death.

In addition to their early and essentially notional claim to the island, from a few decades in the 17th century, the French maintained a close contact with Madagascar during the 19th century. Jean Laborde, a Frenchman who won considerable influence over the queen and her son, Radama II, granted concessions to European entrepreneurs, he choose a French company.

By the 1880s the French government began claiming land as an official French protectorate.

In 1883, when their demands were rejected, a French warship bombarded the town and landed marines. Then Madagascar's foreign affairs went to the French, and Britain acknowledged that Madagascar was then a French protectorate (in return for a similar French understanding on the British position in Zanzibar).

Although he had signed the treaty in 1885, the prime minister began arming and training an army; British officers were made available to help him, resulting in a brief war with a French force sent in 1895 to bring him to heel. The French reached the capital in September 1895; the queen and her husband were sent into exile (in 1897) and Madagascar became a French colony.

Spice:
The History of a Temptation 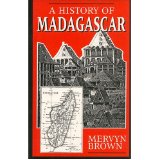 Mervyn Brown
Madagascar, the world's fourth-largest island, is a land where lizards scream and monkey-like lemurs sing songs of inexpressible beauty. Where animals and plants that went extinct elsewhere millions of years ago -- tenrecs, fossa, upside-down trees -- thrive in a true Lost World. Where the ancestors of the Malagasy, as the island's eighteen tribes are collectively known, come alive in rollicking ceremonies known as "turning the bones." Here, join Peter Tyson on a diverting odyssey with four scientists out to plumb the natural and cultural mysteries of this extraordinary land.

The Eighth Continent
Life, Death, and Discovery in the Lost World of Madagascar

Companion to Ships and the Sea
(Oxford Reference)

The World Atlas of Pirates: Treasures and Treachery on the Seven Seas--in Maps, Tall Tales, and Pictures