Money Will Buy Anything

Ships were the main source of supply for California Pioneers. Absolutely everything was available in San Francisco from the hundreds of ships that began arriving within months of the discovery of gold. Among the smart fortune seekers were the ship owners. To be sure, shipping was high risk, but potentially extremely lucrative.

If the ship didn’t go down along the perilous routes to California, owners stood to make up to $800,000 from merchandise. Often, once the merchandise was sold, they also sold the ships.

Equally good at business were the merchants with storehouses where they auctioned goods to the residents of San Francisco. Starkey, Janion & Co was but one of the companies and in an April 12, 1849 ad in the Alta California, the company offered the following from the bark Asenath.

What isn’t on this list, but is on many others, are exotic fruits and vegetables and liquors from around the world. The range is amazing and as often as one wonders "what is that," one might ask "they had those then?

Now landing from bark Asenath direct from Liverpool, expressly selected for the California markets, and for sales on reasonable terms, by the undersigned: 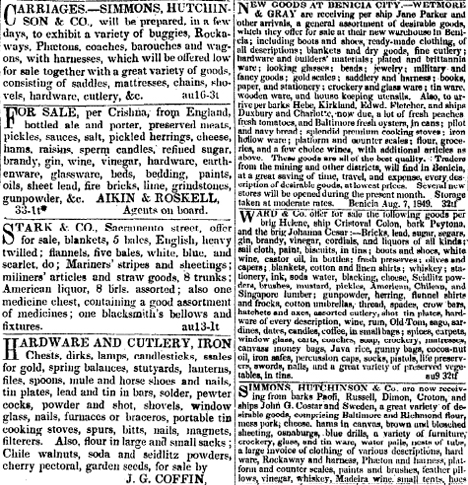 Freaks of Fortune: The Emerging World of Capitalism and Risk in America

Jonathan Levy
Until the early nineteenth century, "risk" was a specialized term: it was the commodity exchanged in a marine insurance contract. Here is a story of how the modern concept of risk emerged in the United States. Born on the high seas, risk migrated inland and became essential to the financial management of an inherently uncertain capitalist future. Focusing on the hopes and anxieties of ordinary people, Levy shows how risk developed through extraordinary growth of new financial institutions - insurance corporations, savings banks, mortgage-backed securities markets, commodities futures markets, securities markets - while posing moral questions. To be a free individual, whether an emancipated slave, a plains farmer, or a Wall Street financier, was to take, assume, and manage one's own personal risk. Yet this often meant offloading that same risk onto a series of new financial institutions. Levy traces the fate of personal freedom as it unfolded in the new economic reality created by the American financial system.

Imperial San Francisco: Urban Power, Earthly Ruin
(California Studies in Critical Human Geography)
Gray Brechin
First published in 1999, this history of San Francisco traces the exploitation of both local and distant regions by prominent families — the Hearsts, de Youngs, Spreckels, and others who gained power through mining, ranching, water and energy, transportation, real estate, weapons, and mass media. The story is one of greed and ambition on an epic scale, tracing the connections between environment, economy, and technology with links that led, ultimately, to the creation of the atomic bomb and the nuclear arms race.

The Big Spenders: The Epic Story of the Rich Rich, the Grandees of America and the Magnificoes, and How They Spent Their Fortunes

Lucius Beebe
The Big Spenders was Lucius Beebe's last and many think his best book. Here he describes the consumption of the Gilded Age. Beebe enjoys it all immensely, and so do his readers, whether it is James Gordon Bennett buying a Monte Carlo restaurant because he was refused a seat by the window, or Spencer Penrose leaving a bedside memo reminding himself not to spend more than $1 million the next day.

Millionaires and Kings of Enterprise

The Marvellous Careers of Some Americans Whose Pluck, Foresight, and Energy Have Made Themselves Masters in the Fields of Industry and Finance
James Burnley

Charles R. Morris
The acclaimed author vividly brings the men and their times to life. The ruthlessly competitive Carnegie, the imperial Rockefeller, and the provocateur Gould were obsessed with progress, experiment, and speed. They were balanced by Morgan, the gentleman businessman, who fought for a global trust in American business. Through antagonism and their verve, they built an industrial behemoth — and a country of middle-class consumers. These four determined men wrenched the economy into the modern age, inventing a nation of full economic participation not imagined a few decades earlier.