Mormon Island, situated where the North and South Forks of the American River join on the route from Sutter's Fort to his sawmill at Coloma, was one of the earliest mining camps set up after the discovery of gold at Sutter's Mill.

William Alexander LinnSix weeks after the initial discovery of gold, a small group of Mormons was mining gold at Mormon Island. By summer of 1848, Mormon Island had over a hundred men.

Samuel Brannan, the "Spiritual Guide and director for the Mormon population of New Helvetia and other districts of California" opened a store.

For quite some time, Brannan required the miners to tithe by giving one-tenth of their earnings, to the Mormon Church.

The camp was called Mormon Island because the early miners cut a channel across one edge of the gravel bar there, forming a small island. The town quickly outgrew the small gravel bar.

The "Mormon Island Mining Association," having at great cost and labor dug a canal, and nearly completed two dams, with a view to change the present bed or current of the American Fork of the Sacramento river, near or at "Mormon Island," and being at present unable to go on with said work by reason of freshets, have adjourned further prosecution of the same until the 1st of June, or until the weather and water will admit of a renewal of tho work. All persons are therefore notified that the members of said association, (being entitled to the exclusive benefit of all mining or other advantages accruing from said work,) will allow no person under any pertence whatever to interfere in any way with said work or the ground connected therewith, inasmuch as they are determined to resist all encroachments upon their rights.

The above is published by order of the Association. 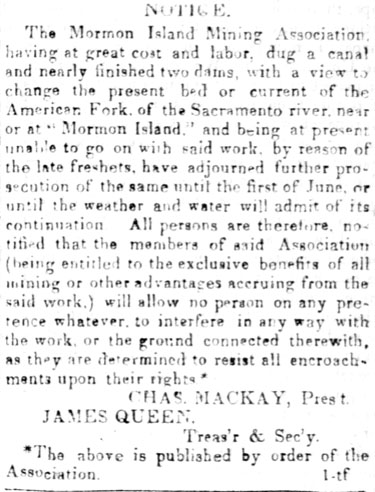 The Mormon Island Mining Association, having at great cost and labor, dug a canal and nearly finished two dams, with a view to change the present bed or current of the American Fork, of the Sacramento river, near or at "Mormon Island." and being at present unable to go on with said work, by reason of the late freshets, have adjourned further prosecution of the same until the first of June, or until the weather and water will admit of its continuation. All persons are therefore, notified that the members of said Association (being entitled to the exclusive benefits of all mining or other advantages accruing from the said work.) will allow no person on any pretence whatever, to interfere in any way with the work, or the ground connected therewith, as they are determined to resist all encroachments upon their rights.

We were furnished with the Sacramento papers of yesterday by Freeman & Co.

They contain not an item of news.

We notice the assembling of a Miner's Convention at Mormon Island for the purpose of adopting measures protective of mining interests on the American river. We propose to publish the proceedings tomorrow.

At a meeting ol the Mormon Island Mining Association, held June 16, 1849, the following Resolutions were presented by the Secretary and unanimously adopted.

Whereas, Charles Leonard, James K. Sargeant and Nathan English, three of the original members of this Association were unfortunately killed by Indians during the interval of adjournment last Spring, therefore,

Resolved, That respecting the rights of the deceased members to the fruits of their labor, the Association do decide as the best plan for doing justice to those rights, that the shares of the above deceased members be let out to other persons to work on halves, the Association holding the proceeds of the other three half shares, subject to the order of the Heirs, Executors or Administrators of the deceased — the said Heirs, Executors or Administrators to be recognized as such by the Association or by Law, and who must make their application on or before the 1st of January, 1850, and failing to do this the three half shares to fall to the use and benefit of the Association.

Resolved, As the Heirs, Friends and particular past residence of the deceased are unknown to the Association, that the above proceedings be published in the papers of this Country, and as far as possible in the papers of Oregon and the States, especially of Maine, Massachusetts, Missouri and Oregon.

Mormon Island was a natural stopping point between Sutter's Fort and Coloma; by 1850, two stage lines operated. The first ran from Sacramento to Coloma, stopping at Mormon Island. The other ran from Sacramento to Mormon Island and back. The town had become one of the main communities of the Mother Lode. In 1851, a post office was established. By 1853, the population of the town was about 2,500, and by 1855, four hotels, seven saloons and about fifteen other businesses flourished.

Trout in the American.

There seems to have been no hydraulic mining on the tributaries of the South Fork of the American river for the past several years, and the stream has become remarkably clear as far down as Mormon Island. Chris Ecklon and a party went out fishing a few days ago in the neighborhood of Salmon Falls, and found excellent sport in trout fishing. The speckled beauties were pulled in large number with fly hooks. The American seems to get all its slickens from the North Fork, which joins the South Fork just above the Folsom Prison.

The Polygamous Wives Writing Club:
From the Diaries of Mormon Pioneer Women

Paula Kelly Harline
"Since the days of our polygamous foremothers, Mormon women have been stereotyped as voiceless victims and dupes. By digging into the history of Mormon polygamy through the writings of the women who lived it, Paula Kelly Harline shows that Mormon women have wrestled with the unique demands of their faith with a full range of human motivations and feelings: grace and conflict, acquiescence and resistance, vocal criticism and quiet acceptance, pride and dejection, confidence and frustration. Is polygamy really a core element of Mormon theology? Harline offers both powerful commentary on this unresolved question that still weighs on so many Mormons, as well as a richly detailed history of Mormon women's lives. Intimate and important, this is a Mormon studies must-read." --Joanna Brooks, author of The Book of Mormon Girl

Frank Soule, John H. Gihon, Jim Nisbet. 1855
Written by three journalists who were witnesses to and participants in the extraordinary events they describe. The Annals of San Francisco is both an essential record for historians and a fascinating narrative for general readers. Over 100 historical engravings are included. Partial Contents: Expeditions of Viscaino; Conduct of the Fathers towards the natives; Pious Fund of California; Colonel John C. Fremont; Insurrection of the Californians; Description of the Golden Gate; The Presidio of San Francisco; Removal of the Hudson's Bay Company; Resolutions concerning gambling; General Effects of the Gold Discoveries; Third Great Fire; Immigration diminished; The Chinese in California; Clipper Ships; Increase of population; and Commercial depression.

J. Kingston Pierce
Seattle-based freelance writer Pierce presents a fascinating view of a variety of colorful people and events that have molded the unique environment of San Francisco. He chronicles historical highlights along with a focus on current issues. Pierce touches on the gold rush, earthquakes, and fires and introduces the lives of politicians, millionaires, criminals, and eccentrics. Pierce sparks the imagination in relating the stories of yesterday to today.