The Great Prophetess and Doctress

The Madame has astonished thousands of her visitors in France, England and America, by revealing the Past, Present and Future Events of Life, such as Lawsuits, Travel by Sea or Land, Lost or Stolen Goods, Hidden Treasures, Absent Friends or Relatives, and all affairs of Business in general.

Between Jackson and Pacific.

Office Hours from 8 o'clock in the morning until 8 in the evening. 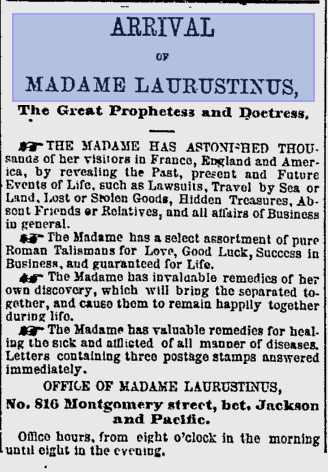 Frank Soule, John H. Gihon, Jim Nisbet. 1855
Written by three journalists who were witnesses to and participants in the extraordinary events they describe. The Annals of San Francisco is both an essential record for historians and a fascinating narrative for general readers. Over 100 historical engravings are included. Partial Contents: Expeditions of Viscaino; Conduct of the Fathers towards the natives; Pious Fund of California; Colonel John C. Fremont; Insurrection of the Californians; Description of the Golden Gate; The Presidio of San Francisco; Removal of the Hudson's Bay Company; Resolutions concerning gambling; General Effects of the Gold Discoveries; Third Great Fire; Immigration diminished; The Chinese in California; Clipper Ships; Increase of population; and Commercial depression.

J. Kingston Pierce
Seattle-based freelance writer Pierce presents a fascinating view of a variety of colorful people and events that have molded the unique environment of San Francisco. He chronicles historical highlights along with a focus on current issues. Pierce touches on the gold rush, earthquakes, and fires and introduces the lives of politicians, millionaires, criminals, and eccentrics. Pierce sparks the imagination in relating the stories of yesterday to today.