Count Agoston Haraszthy, a Hungarian Nobleman born in 1812, came to the United States in 1840 and lived in the Eastern United States (including Wisconsin) until news of the discovery of gold reached him. Early in 1849, he was elected captain of a train of wagons destined for California via the Santa Fe Trail. Although most California-bound travelers were lured westward by dreams of gold, Haraszthy said that he was going to California "to settle, not for the gold," and that he intended to plant a vineyard near San Diego. Traveling with his entire family, he left Wisconsin in March, 1849 and arrived in San Diego the following December. 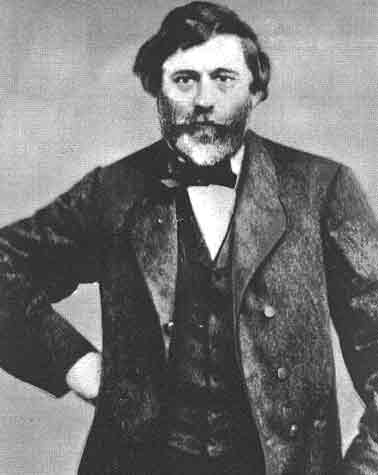 In San Diego, as in Wisconsin, Haraszthy plunged into a frenzy of activity. He formed a partnership with Juan Bandini, a prominent Spanish-Californian, and launched a host of business and agricultural projects. He studied soil conditions in San Diego to learn about cultivation in the arid climate of the region.

He planted fruit orchards, operated a livery stable and stagecoach line, opened a butcher shop, and organized a syndicate to subdivide a large section of the San Diego Bay shore into streets, parks, and building lots. The land lay between Old Town and New San Diego and was called Middle San Diego, or Middletown. It was informally known in San Diego as "Haraszthyville."

While in San Diego, Haraszthy imported grape vines by mail. Some came from the eastern United States, others from Europe. He also planted a vineyard on a tract of land near the San Diego River. On April 1, 1850, in the first election held under the new American administration of California, Haraszthy was elected sheriff of San Diego County. He also served as city marshal. In his capacity as a private contractor, he built a jail for the city of San Diego, which was completed in 1851.

He learned about the Mission grape which was of true European origin, but noted defects in the quality of the wine. He was convinced that plantings of nobler varieties could be commercially viable, and he began to preach that good wine can only be made from good grapes.

With friends, he brought a tract of 160 acres in Mission Valley, a few miles northeast of San Diego where he planted cuttings of grapevines ordered from Europe. Dissatisfied with the results due to the sub-tropical climate, he explored the San Francisco Bay Area, and purchased acreage near San Francisco's Mission Dolores in March 1852. At his new ranch, Haraszthy designed and laid out a nursery and horticultural garden which he named Los Flores. With his son's help he planted fruit trees and shrubs imported from the East.

In San Francisco, Haraszthy became friendly with a group of Hungarian metallurgists. He formed a partnership under the name of Haraszthy and Uznay and built a large private refinery facility, called the Eureka Gold and Silver Refinery. When a branch of the United States Mint opened in San Francisco in April 1854, Haraszthy became the first U. S. assayer. In August 1855, he became melter and refiner at the Mint.

A grand jury investigation of alleged defalcations of gold from the Mint led in September, 1857, to a federal indictment charging Haraszthy with the embezzlement of $151,550 in gold. A long investigation led to the dismissal of the criminal charges. A civil trial then followed, which fully exonerated Haraszthy in February 1861.

While the mint investigation was pending, Haraszthy moved to Sonoma, about fifty miles north of San Francisco. In 1856, he bought a small vineyard northeast of the town and renamed it Buena Vista. He moved his vines there from Crystal Springs and began to expand the vineyards.

In 1857, he began to bore tunnels into the sides of a nearby mountain and build stone cellars at their entrance. He eventually had two large stone winery buildings, equipped with underground tunnels and the latest wine-making equipment in California. Haraszthy s cellars at Buena Vista were the first stone wineries in the state. In 1857 his attention was called to the vineyard of General Mariano Guadalupe Vallejo at Sonoma. At the time Haraszthy made his first appearance at Sonoma in 1857, Vallejo was the leading vintner.

Strong Wine: The Life and Legend of Agoston Haraszthy

He added acreage to his original purchase, eventually holding more than 5,000 acres of valley and hillside. He was a proponent of hillside plantings, arguing that vines should be permitted to grow without irrigation. He divided some of his acreage into smaller plots, inducing prominent Californians to come to Sonoma, where he planted vineyards for them. He was a vocal advocate of Chinese immigration, arguing that Chinese should be permitted to come to California and provide much-needed labor. He built a Pompeiian-style villa in the middle of the Buena Vista vineyards, in which he lived with his family.

In 1858, Haraszthy wrote a 19-page "Report on Grapes and Wine of California," which was published by the California State Agricultural Society. With practical advice for planting vines and making wines, it encouraged the planting of grapes throughout the state. In later years, Haraszthy s "Report" was recognized as the first treatise on winemaking written and published in California, and praised as the "first American explication of traditional European winemaking practices."

In 1863, Haraszthy incorporated the Buena Vista Vinicultural Society, the first large corporation in California (perhaps in the United States) organized for the express purpose of engaging in agriculture. With the support of prominent investors, he greatly expanded his vineyards in Sonoma, making wine which was sold as far away as New York. In 1864, an article in Harper s Magazine proclaimed that Buena Vista was the largest establishment of the kind in the world.

A copy of a book entitled Grape Culture, Wines and Wine-Making, with notes upon Agriculture and Horticulture, by A. Haraszthy, Commissioner to report on the Improvement and Culture of the Vine in California, with numerous illustrations, New York, Harper & Brothers, has been placed upon our table by A. Roman & Co. It is an octavo volume of 420 pages, printed and bound in elegant style.

Such are the main parts of the work, which is so comprehensive that we cannot undertake in one article to c

omment on each of its chapters. It is a substantial book, full of the most valuable information upon all the branches of wine-growing. We do not hesitate to assert that it is worth not only more than any other English book, but more than all other English books put together, on the same subject. We speak knowingly, because we have examined all the accessible English works on wine, and we have found most of them to be written for ornamental gardeners who may have a few vines in green-houses . . .

In 1856, a ship sailed through the Golden Gate with thousands of cuttings of Europe's choicest vines -- the Flame Tokay, Zinfandel, Muscat of Alexandria, Seedless Sultana, Black Morocco -- all selected by Haraszthy. That Zinfandel grape is now the most planted grape in California. Haraszthy bought more land and named his new domain Buena Vista or "Beautiful View Again." By the end of 1857 he had more than tripled the total grape acreage of Sonoma Valley. In that single year he had planted 80,000 vines on about 118 acres.

Later after one of his wine cellars containing vintages of two years was destroyed by fire, Haraszthy traveled to Nicaragua where he bought a sugar plantation.

In 1861 he was appointed by the governor as special commissioner to visit European vineyards and report thereon; the result of his report was the introduction of 400 distinct varieties of apples into the Golden State.

In 1868 he went to Nicaragua, where at the head of a company of friends he obtained valuable privileges for the manufacture of wines and spirits, suger and lumber, acquiring 100,000 acres of the best land in Center America. In 1868 his wife came down with yellow fever and died. It was upon his plantation, the Hacienda San Antonio near the port of Cornito, that he met his death (July 6, 1870).