Into the Port of San Francisco with the tide of the gold seekers came men like George Roeben and Richard Graham, two seafaring men who spent a short time in the up-river gold country, but returned to San Francisco when abandoned ships began to choke the harbor.

Seeking a better way to accumulate wealth than digging for it, they listened to the call of shipmasters for crews and realized at once that if they could supply sailors for those abandoned ships, more gold could be found in this field than along the forks of the American River. They had passed in and out of the many ports where sailing was controlled by boardinghouse keepers, and so they decided to enter the business.

Roeben and Graham opened the first "deep-water" boardinghouses in San Francisco in 1849.

Roeben's place, known as the "German House," was moved from a low quarter of the waterfront to a new location on Pacific Street, near Davis, and Graham's headquarters were in a low frame building known as the "Irish House" on Front Street at the corner of Keeler's Alley.

While the passing of years eventually saw the disappearance of Roeben's establishment, the boardinghouse which Graham opened became the "New York Hotel" and moved to 510 Davis Street, between Pacific and Jackson, and after his death was operated by his heirs for more than half a century.

(NOTE: In May 1999, E. Dolan e-mailed The Maritime Heritage Project with information about her family's arrival in San Francisco and about the longevity of the "New York Hotel": "My great great grandfather, Richard Graham, came with his wife Elizabeth. He started a crimp joint. He died in 1861 and Elizabeth married James Kenney. He died a few years later and she married a third husband, Thomas Murray. Thomas Murray ran the business, and later his son did. Elizabeth's sister Mary (?) was married to Capt. Eddie Mason, a bar/bay pilot. This sounds like a good way for the runners to get on the ships, from the crimp joint -- go with the bar pilot. Capt. Mason had a son, Capt. Eddie Mason, Jr., also a bar pilot".)

When Roeben and Graham hung out their shingles offering rooms and board to seafaring men, their houses were soon resounding with the boisterous laughter and rough talk of men who had been to the mines for a try of their luck but came back to swallow the simple fare and lager beer offered there. It wasn't long before the amount of their board ad keep placed the sailors under obligation to the keepers who, meanwhile, notified ship owners and masters that a ready supply of seamen was to be had by the mere payment of commissions, known as "blood money."

With more than four hundred vessels in the harbor at the mercy of wind and waves, with some already neglected to the point where seams opened to let in the water, shipmasters were happy, indeed, to pay a bonus for every hand shipped to sail worthy vessels out of that bone yard of bare masts and spars.

Poor Jack-the-Sailor, forced to seek food and shelter on credit, was now compelled to agree that the boardinghouse keeper draw from the ship's master an advance on his wages for the next month or two at sea in satisfaction of the debt for all that beer and board.

< When the number of boardinghouses became so plentiful that competition became lively for the control of seamen, the boardinghouse reversed the "blood-money" system from the peculiar methods which prevailed during the few months when sailors were scarce in San Francisco to a system under which they paid to ship captains certain specified sums for the privilege of handling their manpower problems.

With the new competition between the keepers, each house began employing men to meet the vessels off-port, at the entrance to the Golden Gate, to lure the crews into the boardinghouses with liquor, obscene pictures, and women. These off-port greeters were called "runners," and later on some prospered, opened their own houses, and came to be known by the more dignified term of "boarding masters."

Clothing-store proprietors, hotels, and the dives of the Barbary Coast also employed runners to solicit the sailors' patronage and fleece them of whatever spare change was left when the boarding masters had dealt with them. 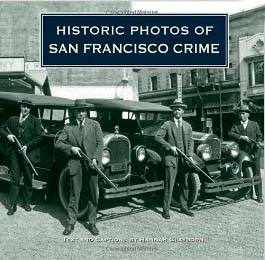 Crimps, boarding masters, and their tribe soon became so powerful that they actually controlled the police, the courts, and the city officials by paying hush money for immunity form interference and sharing their profits with the authorities. Moreover, they had so thoroughly hoodwinked the public that the Sailor's Home, opened in February 1857 by the philanthropies of the Ladies Seamens Friends Society, was for many years the largest crimping agency of them all.

Dedication of the Sailor's Home

This institution was appropriately dedicated last evening. Ex-Mayor Webb presided, and made a statement to the objects of the establishment of the Sailor's Home, and alluded to the many obstacles which the ladies who started the enterprise had been compelled to surmount. Short and appropriate addresses were also delivered by Mr. Hannell, the Superintendent, Capt Elliot, Judges Coon and Tracy, and the Rev. Mr. Davis. The institution will be under the control of the Ladies' Seamens' Friend Society. From personal observation I should judge that the building would accommodate comfortably about one hundred boarders. The objects to be attained by the establishment of this Home are worthy the consideration of the best portion of the community, and I hope the effort on the part of the ladies to protect the sailor, during his stay in port, from the various combinations to rob him, will be successful.

It was only after the passage of a law which prohibited boarding masters from enticing seamen from ships, harboring seamen, or receiving from ship captains the advance on seamen's wages that Richard Graham's "New York Hotel" finally passed from the scene sometime in the early 1920s, ending a continuous existence of more than 75 years, the oldest in the business.