The objects of the Society of California Pioneers were declared, in the words of the constitution, "to cultivate the social virtues of its members, to collect and preserve information connected with the early settlement and conquest of the country, and to perpetuate the memory of those who sagacity, enterprise, and love of independence induced them to settle in the wilderness, and become the germ of a new State."

The admission fees, which are now (1854) ten dollars, and a monthly subscription of a dollar, payable half-yearly in advance, "and all funds arising therefrom or by donations, shall be safely invested, and the income arising therefrom shall be appropriated to charitable purposes, exclusively for the use and benefit of the widows and orphans of pioneer immigrants, members of this society." 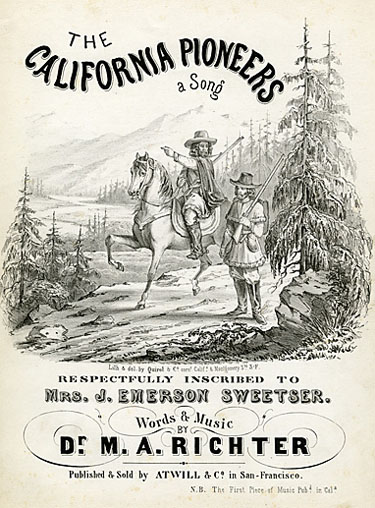 The city has worn a gay appearance this week. The streets are full of strangers from the country, drawn hither by the unusual public displays. The society of California pioneers celebrated the tenth anniversary of the admission of California into the Union, on Monday last. The literary exercises were of very great interest. Edmund Randolph, esq., read a historical essay on California, giving a detailed and very complete account of every incident connected with the history of the country from teh earliest date of its record. Edward B. Campbell, esq., delivered the poem. Senator Benjamin, Reverdy Johnson, Gen. Shields, Col. Fremont, and Gen. Vallejo, were among the honored guests. Today witnesses the introduction of steam fire engines in California. Monumental fire company, No. 6 have received their engine from. Lee & Lanrnod, Novelty works, New York, and they are having a grand procession and general jollification in honor of the event. Another steam fire engine, designed for one of our companies, is on the way around the Horn, and it is predicted by some of our old firemen that at the expiration of two years at farthest, steam engines will have taken the place of hand machines in this city.

Hodges Series on Business, Entrepreneurship and Public Policy.
Edith Sparks
Late 19th century San Francisco was an ethnically diverse male-dominated society bustling from the gold rush, earthquakes, and explosive growth. Within this booming marketplace, some women stepped beyond their roles as wives and homemakers to start businesses that combined family concerns with money-making activities. Edith Sparks traces the experiences of women entrepreneurs, exploring why they started businesses, how they attracted customers and managed finances, and how they dealt with failure.

The Infamous King Of The Comstock: William Sharon And The Gilded Age In The West

Shepperson Series in Nevada History
Michael J. Makley
William Sharon was a colorful scoundrel of the 19th century mining West. He epitomized the robber barons of the nation's Gilded Age and the moral decay and corruption of that period, yet he was also a visionary capitalist who controlled more than a dozen mines on Nevada's Comstock Lode, built the Virginia & Truckee Railroad, manipulated speculation and prices on the San Francisco Stock Exchange, and revived the collapsed Bank of California. Sharon's archenemy Adolph Sutro called him "a thoroughly bad man - a man entirely void of principle."

The Inventor and the Tycoon: The Murderer Eadweard Muybridge, the Entrepreneur Leland Stanford, and the Birth of Moving Pictures

Edward Ball
Nearly 140 years ago, in California, photographer Eadweard Muybridge captured time with his camera and played it back on a flickering screen, inventing the technology of moving pictures. Yet the visionary inventor Muybridge was also a murderer who killed coolly and meticulously. His trial became a national sensation.

William Heath Davis.
Davis was born in Hawaii in 1822, raised in Boston, traveled a great deal by sea, and became one of the most prominent merchants in San Francisco by 1845. Between 1849 and 1855 the miners gathered more than $400 million dollars; once adjusted, it is a sum today reaching into the trillions. It was a social phenomenon marked by the carnivalesque