Between 1846 and 1899, the Daily Alta California, San Francisco, referenced Levy as follows:

Thus, the following is but a few news items about Levy families in San Francisco. 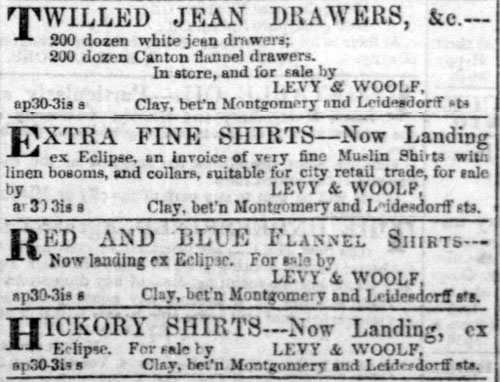 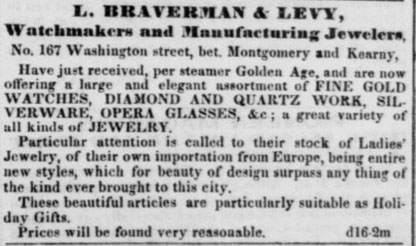 Arrival of the Senator.

Retail clothiers on the waterfront generally received a larger proportion of payments of sailors' advance wages than did saloon keepers. Sailors' boardinghouse keepers were paid the largest amount. Not only did almost one third of all advances in 1886-7 go to retail clothiers, those payments went primarily into the hands of two men - Louis Levy and Gussie Stein.

It was learned yesterday on good authority that Louis Levy, at present Deputy Health Officer, will be appointed to succeed Morris Levy as secretary of the Board of Public Works. Morris Levy has been granted a six months' leave of absence, but it is understood that he will sever his connection with the position permanently. Louis Levy has drawn but little salary since he assumed his present place on account of injunction suits. The salary of the two positions is the same $150 per month with this difference, that the secretary of the Board of Works "gets his," Levy says. Morris Levy's leave begins on April 1 and Louis Levy's new appointment will probably be given to him on that date. No mention is made of the man who will succeed the last named Levy as Deputy Health Officer. 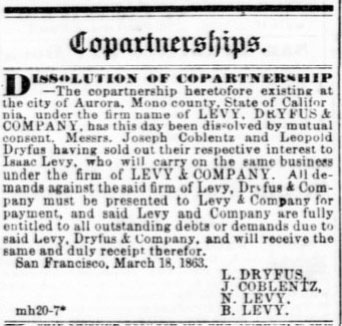 Daniel Levy, aged philanthropist, one of the founders of the French Alliance in San Francisco and a chevalier of the legion of honor, died yesterday at his home, 2623 Steiner street.

Levy was one of the early settlers of the state and has for 50 years been identified with the education and organization of his countrymen. He was a writer of history and was at one time prominent in the journalistic circles of France, his articles appearing in the best American and foreign magazines.

For his work In aiding the French in this country and for the part he played in the building of the French hospital in this city he was recently decorated with the cross of the legion of honor.

As a complete surprise to Rabbi M. S. Levy was the action of his congregation, that of Beth Israel, Sunday when the members gave him the-high and unusual honor of appointment for life, this being the first time such"a step has been taken in the Jewish church on the Pacific coast.

The event came at the annual meeting of the congregation. Doctor Levy had not the least inkling of the proposed plan and when a resolution appointing him for life was unanimously passed he could scarce understand it.

The following officers were elected:

Commodore Levy:
A Novel of Early America in the Age of Sail
(Modern Jewish History)

Irving Litvag
By all accounts, Uriah Phillips Levy, the first Jewish commodore in the U.S. Navy, was both a principled and pugnacious man. On his way to becoming a flag officer, he was subjected to six courts-martial and engaged in a duel, all in response to antisemitic taunts and harassment from his fellow officers. Yet he never lost his love of country or desire to serve in its navy. When the navy tried to boot him out, he took his case to the highest court and won. This richly detailed historical novel closely follows the actual events of Levy’s life: running away from his Philadelphia home to serve as a cabin boy at age ten; his service during the War of 1812 aboard the Argus and internment at the notorious British prison at Dartmoor;  his campaign for the abolition of flogging in the Navy; and his purchase and restoration of Monticello as a tribute to his personal hero, Thomas Jefferson. Set against a broad panorama of U.S. history, Commodore Levy describes the American Jewish community from 1790 to 1860, the beginnings of the U.S. Navy, and the great nautical traditions of the Age of Sail before its surrender to the age of steam.

Harriet Lane Levy
Levy's memoirs of her childhood in San Francisco during the late 1800s gives a rare view into the traditional life and manners of an upper-middle-class Jewish family of the era.

Pioneer Jews
A New Life in the Far West

Ava F. Kahn, Marc Dollinger
Jewish life, history, and culture in California from the Gold Rush to the twenty-first century.This collection of articles by a range of scholars examines various aspects of Jewish life in Los Angeles (which former Israeli kibbutzniks find particularly congenial); the architecture of early synagogues, built not only as houses of devotion but as monuments to Jewish success; and the Jewish role in the counterculture, from Berkeley's free speech movement to support for the Indian occupation of Alcatraz in 1969. Seventeen color and 122 b&w illustrations offer a fascinating visual documentation of the rich and varied life these essays explore.

The Big Spenders: The Epic Story of the Rich Rich, the Grandees of America and the Magnificoes, and How They Spent Their Fortunes

Cosmopolitans: A Social and Cultural History of the Jews of the San Francisco Bay Area

Jews and the Gold Rush:
Birth of a Community

(Film)
Bill Chayes
Beginning in the 1850's, entrepreneurial Jews made their way across America by wagon, sailed for months around South America's Cape Horn and hiked through the jungles of the Isthmus of Nicaragua to seek their fortunes in California. Who were the people who risked everything on these journeys? What was their life like during the Gold rush decades? How are Jewish communities formed? Our film answers these and other questions by chronicling the travels of these pioneers and by taking you to the early settlements in the Gold Country and San Francisco, where by the 1860s Jewish religious and community organizations were flourishing. Has appeared on PBS and the History Channel, in many film festivals across the country, and is a widely used basic instructional tool in California public and Jewish schools.

An Empire of Their Own
How the Jews Invented Hollywood

The Cambridge Guide to
Jewish History, Religion, and Culture
(Comprehensive Surveys of Religion)