The Levison Brothers, California Jewelry Co. was active from 1859 to 1935.

July 12, 1871, Daily Alta California, San Francisco, California, U.S.A. An Important Improvement.— Messrs. Levison Bros., importers of jewelry and silverware are erecting a magnificent iron and brick structure on the north side of Sutter street, new Kearny. The first floor is intended for stores, and the second floor will be used by the Levisons for jewelry manufacturing. The estimated cost of the building is $70,000.

The Levison jewelry manufactory already runs a steam engine and gives employment to thirty men, and will now greatly extend its operations. 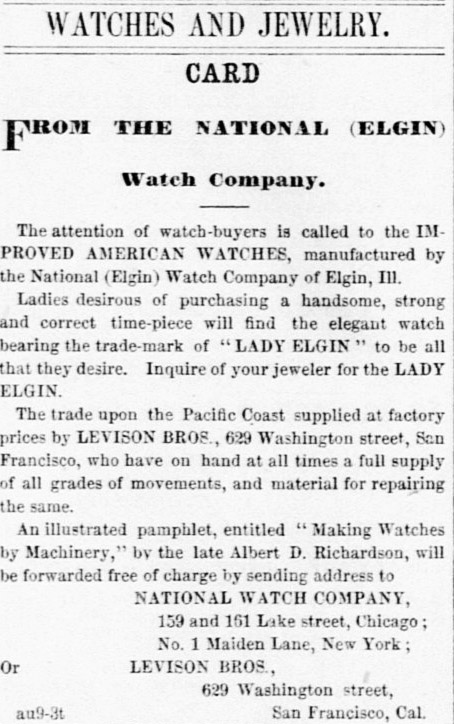 INCORPORATIONS.: Articles of incorporation of were filed yesterday in the office of the Secretary of State . . . of the Eddy Gold and Silver Mining Company, to operate at Mud Springs, El Dorado county; capital, $2,400,000 in shares of $100 each; Directors -- Louis Levison, Frank Locan, Alexander Austin, Gustavus Holland and Henry Marshall; The principal place of business will be in San Francisco.

Mr. Chas. Lemme has this day retired from the copartnership in the Manufacturing Department of the California Jewelry Co.

A DISHONEST JEWELER
He Robs His Employers and then Blows His Brains Out.

An examination of the papers left by Lawrence H. Lundius, who blew his brains out on Monday night, reveals the fact that he bad been engaged in pilfering from his employers. Among the letters was the following:

Messrs. Levison Bros.: I have committed a great crime for which I beg you to forgive me. There is no one else guilty; I am alone the perpetrator. My wife is innocent, and so is everybody else. Yes, I repeat it, my wife is innocent, and I pray you not to molest her at her arrival in this country, from Europe, In a few weeks. L. H. Lundius.

The note was neatly written and carefully sealed in an envelope, on which was written in pencil: "All that belongs to Messrs. Levison you will find in my trunk. The key is in."

Yesterday Lundius' room was searched and jewelry found to the amount of nearly $4000, which had been abstracted from Levison Bros, establishment, in which he had an office and occasionally worked. Mrs. Lundius has been East and is on her way home.

Throughout the early years of the California gold rush there was a constant need for coinage to satisfy the commercial needs of a booming community being based on gold dust. While many firms issued coins from $2 1/2 to $50 denominations, there was still a need for coins of smaller denominations.

When the United States branch mint in San Francisco finally was established in 1854, only 15,000 gold $1 pieces were coined, with no $1 denominations being issued the following year.

The need for smaller fractional denominations of gold coins may have been met by hundreds of varieties of small gold pieces in quarter, half, and dollar sizes.

More than 450 varieties are known to exist, some undated but most bearing dates between 1852 and 1882. Most are anonymous or identified only by initials, but research over the years has made it possible to attribute the majority of the issues to manufacturing jewelers in San Francisco, California and Leavenworth, Kansas.

These small coins have been found in shipwrecks of the time period, and one was featured in an 1852 newspaper account from New Orleans: “We were shown this morning a gold half dollar, California money, which is so much like the United States gold dollar piece, that the best judges would be completely deceived at a first glance. The half dollar piece is lighter in color, and somewhat smaller in diameter, than the dollar. They are of a private issue, and have stamped on them, HALF-DOLLAR CALIFORNIA GOLD 1852.” The lighter color of these coins is the result of their native California bullion, which is rich in silver.

In 1876, fractional currency was slated to be replaced with silver coins. By 1891, bankers and businessmen disliked dealing with gold for myriad reasons, including inconvenience and issues with weight. They got rid of their gold as fast as possible.

1884, The Industries of San Francisco

The California Jewelry Co. occupies a leading position in the jewelry trade of San Francisco and the Pacific Coast. It is noted for the perfect workmanship and exquisite taste of all goods turned out of its manufactory. The company was founded some twenty-five years ago by Levison Bros., the style changing a few years ago to the present name. The company's office and establishment are at No. 134 Sutter Street, the latter occupying spacious and well appointed rooms, covering an area of 67-1/2x120 feet.

Fifty people are employed, all of whom are thorough masters of their particular work. The superiority of the products of the California Jewelry Company is conceded by the trade, and they are sent everywhere in the course of a large exporting business, or as souvenirs or samples of California taste or workmanship., Quartz jewelry, native stones, diamond work, the making of good and silver plate, and ornaments, are special and notable features of the company's manufactures, the resources and experience of the house enabling it to make a very superior article of all descriptions of jewelry.

HERMAN LEVISON DEAD.
His Life Ended in Apartments Over a Stockton Street Restaurant.
The Well-Known Jeweler Acquired Great Wealth and Spent It Freely.

Herman Levison, senior proprietor of the California Jewelry Company, died in his apartments, over the Pup restaurant, Wednesday night. Mr. Levison had been in failing health for three years. The immediate cause death was pneumonia, which developed last Monday. The patient's condition was not deemed dangerous until Wednesday afternoon, when J. T. Bonestell, a member of the company, summoned. Dr. Mayer. An hour later consulting physicians were called, but the patient did not have sufficient vitality to resist the attack of the disease.

Herman Levison was widely known in mercantile circles of this country and Europe. He was an open-handed, generous and broad-gauged man of affairs, who was liberal in extending credit, to smaller dealers, and in some instances his confidence and generosity were abused, although not to the extent of marring the success of the company which he directed.

In 1868 Herman Levison married Miss Marcus, sister of George Marcus, who is now a member of the firm. For many years Mr. Levison owned a beautiful home at the corner of Van Ness avenue and Bush street, which he sold to Johnny Sake for $65,000. There the jeweler, whose income was large, entertained lavishly. He also maintained a house in Hamburg, Germany, where his wife and three children now reside. His daughter, the eldest child, is the wife of Mr. Jason, a prominent banker of Hamburg. Two boys, one aged 20 and the other 14 live with their mother in Hamburg, where Mrs. Levison has resided much of the time since 1888.

In 1885 Mr. Levison organized a pearl fishing company. He and his associates obtained from the Mexican Government an exclusive privilege or concession for gathering pearls In the gulf of California. Mr. Levison invested $85,000 in the enterprise, which did not prove as remunerative as the company expected.

The firm of Levison Bros, was established in 1861, and its business operations have since been very extensive and highly profitable. The estate of Herman Levison embraces the land and the building at 134 Sutler street, occupied by Nathan Dohrmann & Co. and Vanderslice. While the rich jeweler made money rapidly he did not hoard his wealth. He was fond of good living and indulged the pleasures which his wealth could afford. He traveled extensively, and whenever he tarried for any length of time secured pleasant apartments, and surrounded himself with the comfort and luxuries of life.

A. Tuckey, a jeweler, doing business on Montgomery street, died suddenly on Friday afternoon. Within a few hours after the death, Gustav Marcus applied to Judge Levy for special letters of administration on the dead man's estate, and the petition was granted. Marcus is a member of the jewelry firm of Levison Brothers, who claim to be creditors of the deceased. The bond in the case was fixed at $10,000. (By February 18, 1890, Gustav Marcus had been granted special letters of administration by Judge Coffey.)