The Californian was California's first newspaper, printed first in 1846, half in English and half in Spanish, established in Monterey by Colton and Robert Semple in 1846. In July of 1847, B. R. Buckelew succeeded Semple as proprietor and editor, eliminated "The" and changed the name to "Californian."

In the newly made raceway of the Saw Mill recently erected by Captain Sutter, on the America Fork, gold had been found in considerable quantities. One person brought thirty dollars worth to New Helvetia, gathered there in a short time. California, no doubt is rich in mineral wealth, great chances here for scientific capitalists. Gold has been found in almost every part of the country.

Eastern newspapers depended on the reports by the Californian and its rival, the California Star(started by Sam Brannan in 1848 and edited by New Yorker Edward Kemble), for their first reports of gold in California. San Francisco had fewer than 400 residents at the time.

As many other California businessmen did with their companies, Buckelew closed his newspaper in the summer of 1848, giving it to the editor of the California Star, which had folded earlier when its workers joined the rush to the gold fields.

B. R. Buckelew, respectfully informs the citizens of California, that he has located permanently in the Town of San Francisco, for the purpose of pursuing his profession.

WATCHES, CLOCKS, JEWELRY, and other fine Metalic work repaired in the BEST MANNER, and on terms proportional with general prices in California. Business entrusted through a friend, will be attended to the same as with the person proper. WATCH GLASSES and KEYS fitted. CASH INVARIABLY REQUIRED except otherwise previously understood. 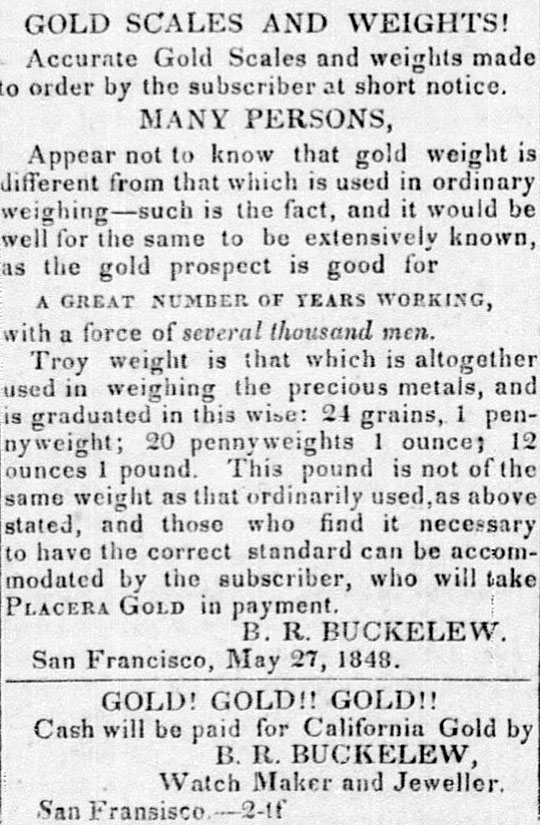 If you cannot find recommended books locally, consider the links provided to
Amazon.com which has proven to be reliable on service and delivery.

Family Skeletons: Exploring the Lives of Our Disreputable Ancestors