Finland is one of the world's most northern and geographically remote countries and is subject to a severe climate. Nearly two-thirds of Finland is blanketed by thick woodlands, making it the most densely forested country in Europe. Finland also forms a symbolic northern border between western and eastern Europe: dense wilderness and Russia to the east, the Gulf of Bothnia and Sweden to the west.

Finland has been inhabited since the last ice age ended 10,000 years ago. When the first Swedish-speaking settlers arrived in the ninth century, the country was home to people speaking languages belonging to the distinctive Finno-Ugric linguistic group. The first dates in Finnish history are connected with the Swedish crusade of the 1150s that, according to legend, aimed at conquering the "heathen" Finns and converting them to Christianity.

There was, however, no Swedish conquest of Finland. The bodies of water that lay between Finland and Sweden, rather than making them enemies or separating them, brought them together. Trade and settlement between the two areas intensified, and a political entity, the dual kingdom of Sweden-Finland, gradually evolved.

It was reported at Dantzic on the 23d that the division of Russian gun boats stationed at Sweaborg have made a movement toward the opposite coast of the gulf in the direction of Riga.

The Russians are making a land communication at Ternz at the extremity of the Gulf of Bothnia.

A French squadron, under command of Admiral Penand sailed for Kiel on the 23d ult., to join the English fleet which was last reported beyond Nargen.

Russia's Minister of Foreign Affairs had issued a circular respecting a blockade of the Finland ports, in which he says that England has departed from the principle that the flag covers the cargo, and he warns neutral vessels of the circumstance.

Several generations of struggle were needed before the Finnish nationalist movement realized its objectives. Numerous members of the Swedish-speaking community entered the campaign, adopting Finnish as their language and exchanging their Swedish family names for Finnish ones. Finnish journals were founded, and Finnish became an official language in 1863. By the end of the century, there was a slight majority of Finnish-speaking students at the University of Helsinki, and Finnish-speakers made up sizable portions of the professions.

Finland's first political parties grew out of the language struggle. Those advocating full rights for Finnish-speakers formed the so-called Fennoman group that by the 1890s had split into the Old Finns and the Young Finns, the former mainly concerned with the language question, the latter urging the introduction of political liberalism. The Swedish-speaking community formed a short-lived Liberal Party.

As the century drew to a close and the Fennoman movement had achieved its principal goals, economic issues and relations with the tsarist empire came to dominate politics. Finland's economy had always been predominantly agricultural, and with the exception of a small merchant class along the coast, nearly all Finns were engaged in farming, mostly on small family farms. Despite the location of the country in the high north, long summer days usually allowed harvests sufficient to support the country's population, although many lived at a subsistence level. In years of poor harvests, however, famine was possible. In 1867--68, for example, about 8 percent of the population starved to death.

Sweden's political development had favored the formation of an independent peasantry rather than a class of large landowners. Even while part of the tsarist empire, Finland maintained this tradition. As a result, instead of serfs, there were many independent small farmers, who, in addition to owning their land, had stands of timber they could sell. When Western Europe began to buy Finnish timber on a large scale in the latter part of the nineteenth century, many farmers profited from the sale of Finland's only significant natural resource, and ready money transformed many of them into entrepreneurs. There was also demand for timber products, and, at sites close to both timber and means of transport, pulp and paper mills were constructed.

Exodus of the Finns

The Finns are leaving Finland. They are quitting the land of bogs and fens because in their native land they are no longer a free people. The Russian bear, "the bear that walks like a man," has reached a great paw across the border and is scratching the name of Finland off the map. As Poland has disappeared, so will Finland disappear, and in anticipation of that evil day the exodus of the Finns has begun. 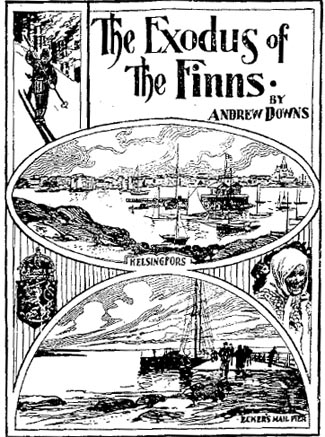 It is to America that they are coming. A conservative estimate by immigration agencies and the Finnish-American press places the number or Finnish immigrants already arrived in this country since last March at 12,000. Most of them have located in Michigan, the Dakotas, California and Alaska. In New York a company has been formed to aid the Finnish immigrants and to form a large colony of Finns either in Canada or in the far western states of America. Over 20,000 heads of families have already entered into a contract, with the Finnish representatives of the American company, and next, spring will see one of the heaviest immigrations ever undertaken from the northern countries.

It is estimated that during the spring and early summer mouths more than 55,000 Finns will have escaped from the Russian bear to take up the task of building new homes either in the United States or Canada. The Russian government is doing all that it can to stem this tide of migration for the bear does not wish deserted land. It desires a nation of slaves and cares little for the rugged, sea invested acres unless the hardy native folk remain to till them.

Baron V. M. von Born, one of the prominent men of Finland, a few weeks ago secured permission from the Finnish senate to send his son, Ernst Victor, a minor, to England to be educated. Governor General Bobricoff refused his consent, nor did he permit an appeal to be made by the Baron to the Czar, but returned the application to the senate. He also issued orders to the governors of all the provinces to immediately report to him the number of immigrants who have left their respective provinces and instructed them to refuse passports to all intending immigrants until further orders.

It is rumored in Finland that if the governor general cannot prohibit immigration he will raise the present immigration tax of 2-1/2 marks per person to such a high figure that few of the people can afford to pay the tax. The Russian censorship is so strict and the system of opening letters passing through the Finnish post office addressed to foreign countries being a notorious fact, little of what transpires In Finland has reached the continent of Europe, and it is mostly through Swedish sources that information of events In Finland reach the outside world.

The Swedish-Finnish press Is so hampered with regulations issued by the governor general as to exist barely in name. According to a recent edict, a Russian newspaper Is to be established at Helsingfors, the Finnish capital. Thirty thousand Finnish marks to aid the publishers has been ordered to be paid by the Finnish treasury, and an annual grant of 30,000 marks Is to be paid until the newspaper Is self supporting. Finnish merchants and other advertisers have received a hint that they must patronize the Russian organ. These are but samples of the oppression to which the Finns are being subjected.

These are but samples of the oppression to which the Finns are being subjected. They are even threatened with the loss of their religious liberty, for it has been rumored that the Greek church was to be established in the place of the Lutheran, which is now the prevailing faith of Finland. No one familiar with the czar's dream of making himself a second pope will for an instant doubt his readiness to substitute cathedrals for the simple churches in which the Finns now worship.

So these people are coming to us. They will be welcomed here, for never in the history of the country has a body of immigrants of more desirable character come to our shores. These Lutheran peasants are not only intelligent and industrious, but they are people of high moral character. They are homemakers, and the homemaker is ever the best citizen . . .

By a recent order of the Russian governor general, the Finns are not even allowed to sing their own old and well loved songs in public places. Instead, they are requested to substitute the Russian national anthem . . . The Finnish landtdag, or legislative body, meeting in May, as all of its ancient privileges have been repealed by the governor general, will not be merely a body with an official name without any power . . .

As a country Finland is unique as regards its formation and growth, its geology and hydrographically. It has been called the land of a thousand lakes. At the same time it is a waterway of a thousand islands. Its scarped coast projects into a rough and tempestuous sea, and the gulfs of Finland and Bothnia gather the land in their embrace. It has been said that the lakes are the despair of Finnish geographers, as no schoolbook or even map can give a really accurate list of their names or even of the number. So that the poetical estimate of the land of a thousand lakes falls far short, in fact. For, as we read somewhere, "the land is surrounded by water, intersected and undermined by water:" hence the bogs and morasses and its name of Fenland or Suome.

The above map is from a Finnish History Site that contains details of immigration from Northern Europe, including ships and passenger names.

Maps and photos from Ostrobothnia in Finland

"The site contains hundreds of new pages, many of them pertaining to the Maritime Heritage of our region. Text in various Scandinavian languages."

U.S. Coast Guard
The Navigation Rules & Regulations Handbook Supersedes Commandant Instruction M16672.2D This edition includes LNM 39-15 and NTM 41-15 33 CFR 83.01(g) requires: "The operator of each self-propelled vessel 12 meters or more in length shall carry, on board and maintain for ready reference, a copy of these Rules."

True Yankees: The South Seas and the Discovery of American Identity
(The Johns Hopkins University Studies in Historical and Political Science)

A Seaman's Book of Sea Stories

John Rousmaniere
Used as a textbook in sailing schools since publication in 1983. Skills of modern sailing with updates. Color illustrations.