17 days from Panama, via Acapulco, San Diego and Monterey, California. Heavy head winds and seat to Acapulco and a constant succession of head winds throughout the passage. After entering harbor in San Francisco, proceeded to Saucelito, California, previous to anchoring, to inform the squadron of the admission of California. At this time, there were over 600 ships lying in the stream.

In the early fall of 1850, we were all excitement to hear the result of California's knock at the door of the Union; and as the day approached when the steamer would bring the decision, many eyes were strained toward Telegraph Hill. At length the signal went up; the Oregon was outside the heads and would soon be in the harbor. As she neared, another signal indicated that she carried flying colors, implying good news, and presently she appeared in sight of those, who like ourselves, overlooked North Beach, gay with streamers and flags of all nations, -- the Stars and Stripes most prominent, and above them, straightened out by the generous wind which seemed to blow a long breath on purpose, floated the longest streamer of all, displaying the words "California Admitted!" The roar of cannon rolled over the waters, and met answering roars from forts and ships.

OCTOBER 29th. This day was set apart to celebrate the admission of California into the Union. When, on the 18th instant, the mail steamer Oregon was entering the bay, she fired repeated preconcerted signal guns which warned the citizens of the glorious news. Immediately the whole of the inhabitants were afoot, and grew half wild with excitement until they heard definitely that the tidings were as they had expected. Business of almost every description was instantly suspended, the courts adjourned in the midst of their work, and men rushed from every house into the streets and towards the wharves, to hail the harbinger of the welcome news.

When the steamer rounded Clarks Point and came in front of the city, her masts literally covered with flags and signals, a universal shout arose from ten thousand voices on the wharves, in the streets, upon the hills, house-tops, and the world of shipping in the bay. 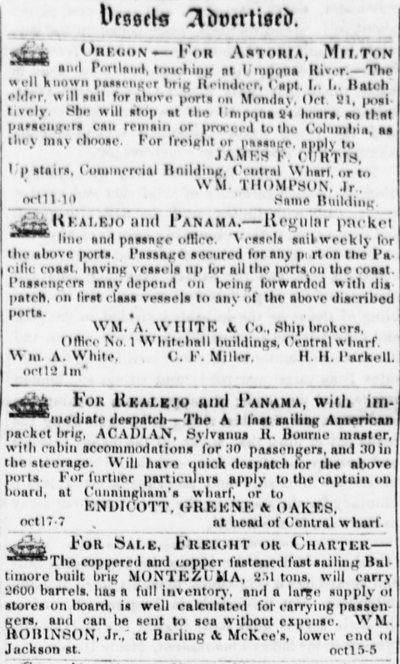 Again and again were huzzas repeated, adding more and more every moment to the intense excitement and unprecedented enthusiasm. Every public place was soon crowded with eager seekers after the particulars of the news, and the first papers issued an hour after the appearance of the Oregon were sold by the newsboys at from one to five dollars each. The enthusiasm increased as the day advanced.

Flags of every nation were run up on a thousand masts and peaks and staffs, and a couple of large guns placed upon the plaza were constantly discharged. At night every public thoroughfare was crowded with the rejoicing populace. Almost every large building, all the public saloons and places of amusement were brilliantly illuminated music from a hundred bands assisted the excitement, numerous balls and parties were hastily got up, bonfires blazed upon the hills, and rockets were incessantly thrown into the air, until the dawn of the following day. Many difficulties had occurred to delay this happy event, and the people had become sick at heart with the hope deferred of calling themselves, and of being in reality citizens of the great American Union. It is only necessary to state here, without going into particulars, that the delay had arisen from the jealousy of the proslavery party in Congress, at a time when they and the abolitionists were nicely balanced in number, to admit an additional free State into the Union, whereby so many more votes would be given against the peculiar and obnoxious domestic institution of the South. Several compromises had been occasionally attempted to be effected by statesmen of each great party, but without success. In the end, however, the bill for the admission of California passed through Congress by large majorities.

Such an occasion beyond all others demanded a proper celebration at San Francisco; and the citizens, accordingly, one and all, united to make the day memorable. A procession of the various public bodies and inhabitants of the city, with appropriate banners, devices, music and the like, marched through the principal streets to the plaza. The Chinese turned out in large numbers on this occasion, and formed a striking feature in the ceremonies of the day. The Honorable Nathaniel Bennett, of the Supreme Court, delivered a suitable oration to the people on the plaza, and an ode, composed for the occasion by Mrs. Wills, was sung by a full choir. During the day repeated discharges of fire-arms and a proper salute from great guns carried off some of the popular excitement, while the shipping displayed innumerable flags. In the evening, public bonfires and fireworks were exhibited from Telegraph Hill, Rincon Point, and the islands in the bay. The houses were likewise brilliantly illuminated, and the rejoicings were every where loudly continued during the night. Some five hundred gentlemen and three hundred ladies met at the grandest public ball that had yet been witnessed in the city, and danced and made merry, till daylight, in the pride and joy of their hearts that California was truly now the thirty-firstState of the Union.

36 flasks quicksilver, one case jewelry, several boxes of unidentified merchandise and 139 large bags of mail (the largest amount of mail ever brought into San Francisco on one vessel to date).