Per Winfield Scott-Was off Cape Horn 36 days, in continual westerly gales; lost jibboom and sustained other damage. Crossed the equator Oct 31, lon 117, and have had light winds and calms most of the time since. Have been off the Heads 3 days in fog and gales. The ships Hero and Winfield Scott, barques Curraghmore and Miceno have anchored off North Beach.

Arrival of the Steamer Winfield Scott

The mail steamer Winfield Scott. Capt. Blunt, arrived at San Francisco on Monday afternoon, 15 days from Panama bringing by way of the Ramsey Route, across Mexico, New Orleans papers to Sept. 1, a fortnight later dates from New York, by telegraph, to Aug. 30, ten days later and from Europe to Aug. 18, 12 days later than previous advices. The news has therefore been but eighteen days on the way from New Orleans, twenty from New York, and most remarkable of all, but thirty-one days from Europe. This is by far the quickest time ever made. She brings 144 passengers, and 221 bags of mail matter, under the charge of Capt. J. M. Thornton, Mail Agent. The following is her memoranda :

Among the cargo recently discharged from the sailing vessel Winfield Scott says the San Francisco Chronicle, were eight splendid Concord coaches, which are destined for the different lines branching out from Sacramento into the mining regions. 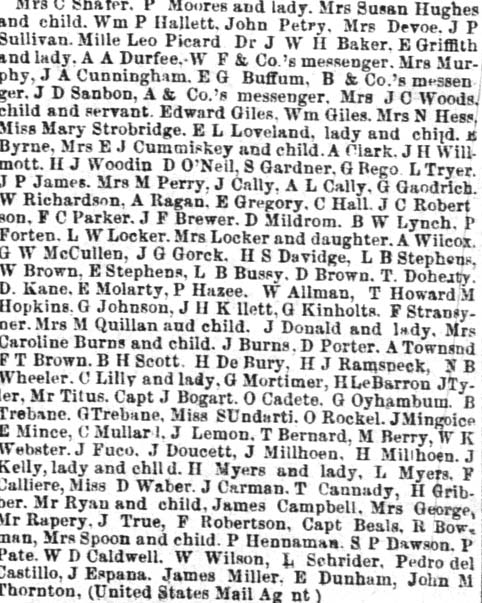 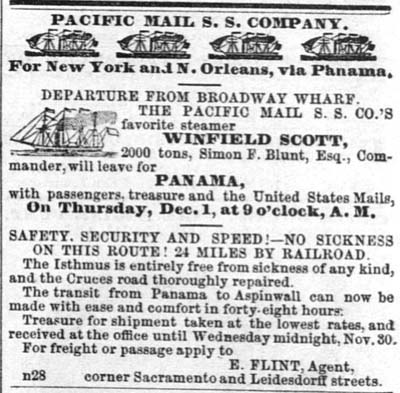 Sailing of the Steamers

The steamer Winfield Scott left at a quarter before 12 o'clock, taking 300 passengers.

Loss of the Steamer Winfield Scott! Passengers and Treasure Saved!

On the 4th December, the steamer California saw the steamer Winfield Scott ashore at Anacapa Island ran close to her and received the ladies and children on board, and also her treasure. She went ashore about midnight on December 2d, during a dense fog her passengers were landed without loss of life or confusion, owing to the coolness of Capt. Blunt and his officers. They are quite comfortably situated. The Winfield Scott will be a total loss.

FURTHER PARTICULARS OF THE LOSS OF THE WINFIELD SCOTT

On Friday night, Dec. 2, at 12 o'clock, the Winfield Scott struck upon a rock on the Island of Anacapa, off the coast of Santa Barbara, about twenty-five miles. She first struck bow on, and then with her stern, next on her side, carrying away her rudder. A great deal of confusion was created on board.

The fog was dense, but weather calm, and by half past one the boats were lowered, and first filled with women and children, who were safely landed, the beach being but a short distance off. In this way all on board were taken ashore, and they were amply supplied with provisions from the wreck.

The California brought off 5 passengers, 2 children and the purser. The remainder were left on the Island, there being but one tent. The wreck of the steamer was left hanging on the rock by her bow, her stern being in eight fathoms of water. She will be a total loss, and must go to pieces in the next storm. The passengers had experienced no suffering, except that of the mind. Treasure and valuables all saved.

Decisions by the U. S. Land Commission Loss of the clipper ship Eclipse

The steamship California will leave this port to-morrow morning for the wreck of the Winfield Scott, where she will take aboard her passengers and treasure and proceed to Panama.

Intelligence was received here to-day of the loss of the American clipper ship Eclipse, of New York. She was totally wrecked in the bay of Spila, Mexico, having gone ashore in a gale of wind on the 19th October, and soon went to pieces. Her cargo, which consisted of Brazil wood, was lost. Captain and crew saved.

History of Alta California:
A Memoir of Mexican California

A State of Change
Forgotten Landscapes of California

Life in a California Mission
Monterey in 1786

Trees in Paradise
A California History

Conquests and Historical Identities in California, 1769-1936

Life in a California Mission
(Picture the Past)

Decline of the Californios:
A Social History of the Spanish-Speaking Californias, 1846-1890