The Sierra Nevada arrived last evening, from San Juan, with about five hundred passengers. The S. N. reports a collision with the Golden Gate, off Cerros Island, which would not have occurred had the former pursued the proper course, namely, in plain road language, keeping to the right as did the G. G. Mr. Purser Foster, with his usual imaginative qualities, states that the G.G. crossed the bows of the S.N. from some unaccountable motive, whereas she was only keeping her proper course, and the Sierra Nevada was not.

Two of the firemen of the Sierra Nevada were arrested last evening, and aken before the U.S. Marshall, for an attempt to blow up the steamer during her passage to this place. It appears that they let all the water to run out of the boilers, which was discovered just in time by the Engineer, to prevent an explosion. ~~ MARK.

Arrival of the Sierra Nevada

The Sierra Nevada, from San Juan del Sud, arrived at San Francisco on Friday. Her dates are no later than those already received.

Steamship Sierra Nevada left San Francisco in company with steamer Cortes. April 1: passed the Cortes at 11 o'clock same evening, and arrived at San Juan April 12 11 days out. Passenger's embarked on the Atlantic steamer Star of the West, on Sunday, 17th, and doubtless arrived at New York on the 24th, in 23-1/2 days from San Francisco. Experienced fine weather after the first day. Left San Juan Del Sud April 23d, and arrived here Friday evening, with 555 passengers, all healthy no deaths nor sickness during the passage. Had strong head winds and heavy seas the last 7 days. Tuesday, 3d instant. 1 a. m. off Cerros Island, saw steamer's light bound down, which proved to be the Golden Gate, half point on our starboard bow; observing her presently to be drawing towards up until full near for safety, it blowing fresh and considerable sea running, put our helm to starboard in order to give her a berth, and from some unaccountable motive she crossed our bows, and had not our engines been instantly stopped on seeing her design, would have struck us by the forward rigging, but fortunately our bowsprit only was carried away, by coming in contact with her larboard quarter as she passed.

Left in port. U. S. sloop of war Portsmouth, Commander Dornin, last from Panama; officers and crew all well. Also, bark Laurens, Logan, discharging, soon to sail for Chincha Islands. Among the passengers by the S. N. is Gov. Lane and suite, on his way to Oregon to assume the Governorship of that Territory.

Great excitement had ensued on board, owing to the discovery by the Engineer of a plot to blow up the ship, by letting off the steam from the boilers. Two of the firemen, named Brofey and Scotty, were defeated in this attempt on the passage to San Juan, on the morning of the 7th of April. Nothing was said about it at the time, and on the return passage a similar attempt was made on the 24th and 27th instants. The fire was withdrawn as speedily as possible and the catastrophe prevented, though with the greatest difficulty. The men were allowed to go at large until the day of the steamer's arrival at this port, when they were put in irons, and are now in custody. The case will probably be speedily examined by the Recorder, when the full facts will be developed. 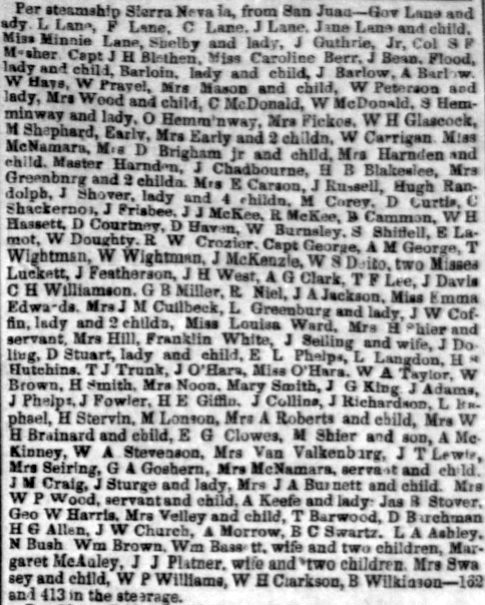 The Children of Chinatown: Growing Up Chinese American in San Francisco, 1850-1920

Family Skeletons: Exploring the Lives of our Disreputable Ancestors.

(Images of America)
Lydia B. Zaverukha, Nina Bogdan, Foreward by Ludmila Ershova, PhD.
Even before San Francisco was founded as a city, Russian visitors, explorers, and scientists sailed to the area and made contact with both the indigenous people and representatives of the Spanish government. Although the Russian commercial colony of Fort Ross closed in 1842, the Russian presence in San Francisco continued and the community expanded to include churches, societies, businesses, and newspapers. Some came seeking opportunity, while others were fleeing religious or political persecution.