ARRIVAL OF THE GOLDEN GATE.

The mail steamer Golden Gate, following rapidly in the wake of the Nicaragua vessel of the 13th, has already brought us advices from the Atlantic side to the 20th ult., being one week later than those received by the Sierra Nevada on Munday night. The Gate has made another splendid passage her passengers being but twenty-two days and twenty-one hours from New York. She brings 574 passengers -- 412 males, 102 females, 58 children, and very large mails from New York and New Orleans.

The passengers who came by this steamer left New York on the steamer Illinois, March 20th, at 2 p.m., arrived at Aspinwall, via Kingston, March 29th at 8 p.m., left Aspinwall by railroad, March 30th, at 9-1/2 a.m., and embarked immediately on their arrival at Panama, on board the Golden Gate.

She has upwards of twelve hundred packages of express matter and merchandise. 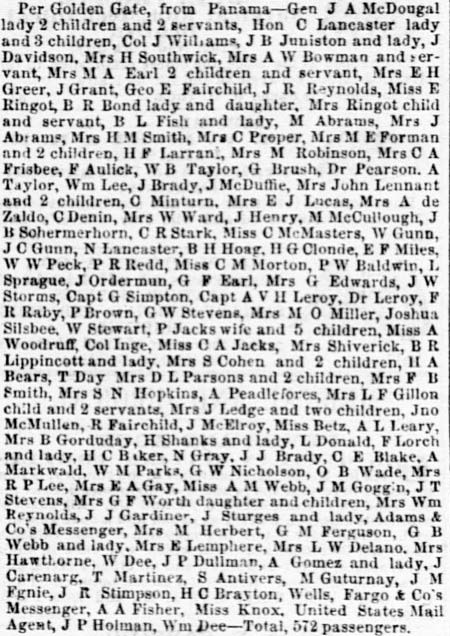