ONE WEEK LATER FROM THE EAST.
Arrival Of Steamer Golden Age

The following memoranda and list of passengers were furnished by the Purser:

Steamship Golden Age, Com. James T. Watkins, left San Francsico on the 16th February, at 11 a.m., arriving at Acapulco at 1 p.m. on the 12d, making the shortest run to this port on record. Time -- six days and twenty-four minutes. Left Acapulco at 10 p.m. same day. In the Gulf of Tehauntepec encountered jheavy head winds and seas. Arrived at Panama on the 28th, at 5 a.m., eleven days and fifteen hours from San Francisco.

Our passengers reached Aspinwall the same afternoon. The Isthmus is perfectly healthy. The railroad is now in successful operation, making the transit regularly in three or four hours. 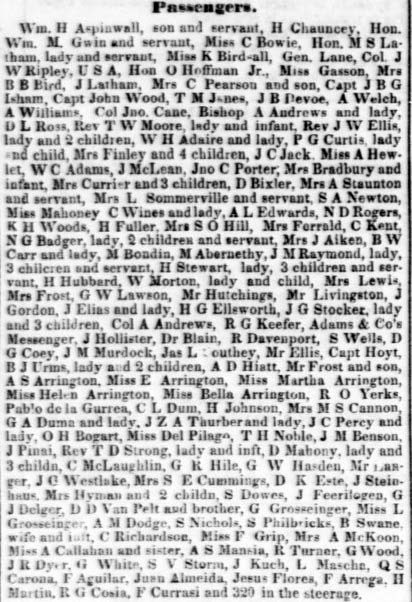