The steamship Golden Age arrived at San Francisco yesterday, with passengers, mails and freight from New York, per steamer Illinois, of sth August, and New Orleans, per Grenada, to August 7th.

The last English steamer from San Juan brings intelligence of great dissatisfaction among the troops forming Walker's army; many of them were sick, and all badly provisioned. They were taking advantage of every opportunity of leaving the State. That portion of the natives opposed to Walker were daily gaining strength, while the adjoining States were combining their forces to march against him at an early date.

The Panama Star states that Rivas is fortifying himself against Walker, and contends that he is State President.

The steamer Golden Age arrived at San Francisco on Thursday morning. We are indebted to the extra of the Journal for the following summary of her news, list of passengers, &c memoranda.

The steamer Golden Age, J. T. Watkins, commander, with passengers, mails and freight from New York, per steamer Illinois, to the 5th August, and New Orleans, per Granada, to August 7th, left Panama 15th of August at 7 p.m., arrived at Acapulco on the 21st at 7 a.m. received the usual supplies of coal and provisions, and sailed at 1 o'clock same day, and arrived at San Francisco at 9 a. m. August 28th. 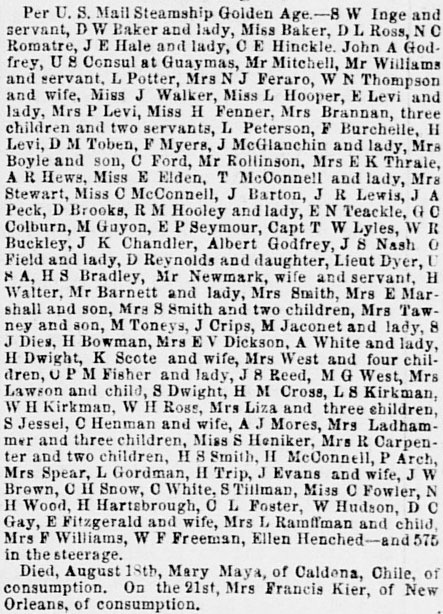 History of Immigration and Ethnicity in American Life

It also provides a theoretical understanding of the reasons for immigration. Though it is particularly useful in its examination of the pre-colonial and colonial periods.