The Nicaragua steamer Cortes, Capt. Cropper, arrived last evening from San Juan de Nicaragua, which port she left on the evening of the 21st ult.

An insurrection has again broken out in the State of Nicaragua. The latest accounts are that the revolutionists have succeeded and will immediately form a new government. Everything is quiet at San Juan, and the facilities for making the transit of the Isthmus improving daily. The City of Salvador was destroyed by an earthquake some week since; many lives were lost and a large amount of property ruined. 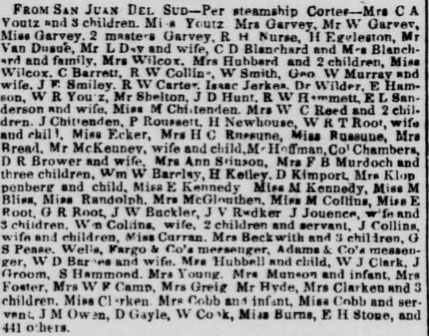 At about 10 o'clock at night, on Sunday, the 16th of April, the city of San Salvador was visited by a severe earthquake, which completely prostrated every building. The first shocks were felt on the previous Thursday which increased in violence, and on Friday fifty-five distinct shocks were felt, continuing on Saturday and Sunday, when they reached their greatest point, and laid the city in ruins. Most of the inhabitants, warned by the first indications, removed to a place of safety, but there were atill many in the city at the time of the catastrophe, and a number were buried in their flight under the falling walls of the houses. Notwithstanding the horrors of the scene, and the imminent danger of remaining in the city, the prisoners who were released when the catastrophe became apparent, rushed into tho deserted and tottering houses to plunder them of what their wretched owners had left behind them.

The President was seriously injured by falling masonry. The Seat of Government has been temporarily transferred to Cojutepeque.

Artists of the West

By 1860, twelve years after the discovery of gold at Sutter's Mill, more than five thousand American blacks had made the difficult trek to California in search of wealth. This study tells their story through primary source materials.

In 1848, news of the California Gold Rush swept the world. Aspiring miners, merchants, and entrepreneurs flooded California seeking gold. The cry of instant wealth was also heard and answered by Jewish communities in Europe and the eastern United States. While all Jewish immigrants arriving in the mid-nineteenth century were looking for religious freedoms and economic stability, there were pre-existing Jewish social and religious structures on the East Coast. California's Jewish immigrants became founders of their own social, cultural, and religious institutions.

The Course of Exclusion, 1882-1924
San Francisco Newspaper Coverage of the Chinese and Japanese in the United States

The Making of the West
A Concise History, Volume I: Peoples and Cultures
Lynn Hunt

A story of cross-cultural exchanges that span the globe, as well as the ongoing interactions between societies, cultures, governments, economies, religions, and ideas. To highlight and help grasp the vital connections between political, social, and cultural events, the book presents a comprehensive picture of each historical era within a brief chronological narrative. The book also situates Europe within a global context, facilitating understanding of the events that have shaped our own times.