The fine steamer Cortes, T. B. Cropper, Esq., commander, arrived from Panama last evening, in a passage of sixteen days.

The list of passengers which we give in another column, and for which we are indebted to Mr. Smith, the purser is very large, numbering about 470, eighty-one of whom are females.

The Cortes brings no later dates from the Atlantic, but her accounts from Panama are down to the 7th inst., which, however, are not of great interest. The report of the ship will be found in the marine column.

The arrival of two hundred workmen at Panama, for the purpose of pushing on the railroad works, and the near approach of the dry season, inspires us with a hope that by the end of August next the company may be able, as they confidently expect, to complete their arduous and important undertaking.

The body of Mrs. Stone, the unfortunate lady who was drowned a few days ago in attempting to cross the river Cardenas, has been recovered. It was found near the mouth of the Cardenas, where it empties into the Rio Grande. Star

The Cruces Road. Not in the memory of the "oldest inhabitant" has the Cruces road been known to be in such a frightful condition as it is at present. Ib.

Mules were very scarce at Cruces last week indeed, we are informed, that it was impossible to get enough to send across all the baggage or all the express goods. Panama Echo.

This has been a difficuit week in which to transport because of the indisposition of the natives to work. Panama Echo

The Natives During the present horrid state of the roads, and the extraordinary height of the numerous mountain streams between this place and Cruces owing to the receat heavy rains, great distress, and accidents of different kinds, have occurred among persons crossing the Istlimns. It afford us much gratification to be able to state that we have heard several cases, and have personally witnessed many acts of kindness extended by native muleteers and residents on the roads, to men, women and children, whose mules got broke down, and who had got separated from their husbands, wives, parents or children. Some of these acts were performed in some cases, at the risk of life, and in all cases at great sacrifices of time and under circumstances which, without such timely relief would have produced to the unfortunate travelers, consequences of the most inconvenient and serious nature. Star.

The steamship Cortes, T. B. Cropper, Esq., commander made the run from this port to Acapulco, on her downward trip, in 7 days and 6 hours, from Acapulco to Panama in 6 days, 1 hour, which is very good time considering she had very inferior coal.

Note: The following passengers were on the steamer Cortez, Captain Cropper, when it cleared for Panama on December 1, 1852. 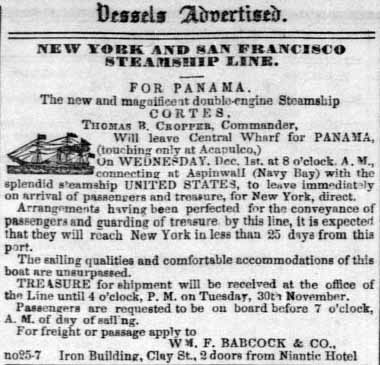