Arrival of the Constitution

The P.M.S.S. Co's steamer Constitution arrived, Saturday, July 18, from Panama. The following is her 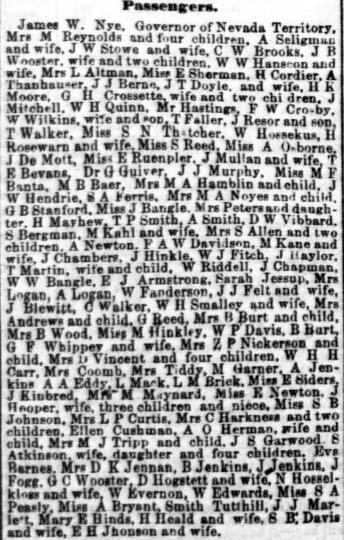 Entrance to the Golden Gate 1800s.

Black Fire: The True Story of the Original Tom Sawyer--and of the Mysterious Fires That Baptized Gold Rush-Era San Francisco

Robert Graysmith
The first biography of the little-known real-life Tom Sawyer (a friend of Mark Twain during his brief tenure as a California newspaper reporter), told through a harrowing account of Sawyer's involvement in the hunt for a serial arsonist who terrorized mid-nineteenth century San Francisco. hen 28-year-old San Francisco Daily Morning Call reporter Mark Twain met Tom Sawyer at a local bathhouse in 1863, he was seeking a subject for his first novel. As Twain steamed, played cards, and drank beer with Sawyer (a volunteer firefighter, customs inspector, and local hero responsible for having saved ninety lives at sea), he had second thoughts about Shirley Tempest, his proposed book about a local girl firefighter, and began to envision a novel of wider scope. Author Robert Graysmith worked as an artist at The San Francisco Chronicle during the years of the Zodiac Killer; he wrote "Zodiac" and "Zodiac Unmasked" about those murders.

Isthmus of Panama Then and Now: Ship Canal, Cruising Panama, Panama Fever, A Year in Panama, History of the Railroad, Trees of Panama and Costa Rica

Lewis J. Swindle
While in the U.S. Military stationed in Turkey in the eary 1970s, Swindle became interested in minerals and geology. In returning to the U.S. and during the 26 years he lived in Colorado, he spent countless hours in the mountainous terrain looking for, digging and collecting the minerals known to exist in the Pikes Peak Region. In moving to the California and the Gold Belt Region, he searched out the history of the gold in the region.

The Age of Gold:
The California Gold Rush and the New American Dream

“I have found it.” These words, uttered by the man who first discovered gold on the American River in 1848, triggered the most astonishing mass movement of peoples since the Crusades. California’s gold drew fortune-seekers from around the world. That discovery accelerated America’s imperial expansion and exacerbated the tensions that exploded in the Civil War. The Gold Rush inspired a new American dream — the “dream of instant wealth, won by audacity and good luck.” Brands tells his epic story from multiple perspectives: of adventurers John and Jessie Fremont, entrepreneur Leland Stanford, and Samuel Clemens — alongside prospectors, soldiers, and scoundrels. He imparts a sense of the distances they traveled, the suffering they endured, and the fortunes they made and lost.

San Francisco Memoirs: 1835-1851: Eyewitness Accounts of the Birth of a City

Malcolm E. Barker
In July 1846 San Francisco was a tranquil settlement of about 150 inhabitants. Three years later it was an international metropolis with more than 30,000 people thronging its streets. Recalled in this intriguing collection of personal anecdotes from those tumultuous times are the days when San Francisco Bay extended inland to Montgomery Street. Bears, wolves, and coyotes roamed the shore. The arrival of 238 Mormons more than doubled the town's population.

Skull in the Ashes: Murder, a Gold Rush Manhunt, and the Birth of Circumstantial Evidence in America

John Boessenecker
A collection of true tales of villainy and violence during the California Gold Rush. How gold fever ignited a rush of families, but also prostitutes, feuds, lynchings, duels, bare-knuckle prizefights, and vigilantes.

The Trials of Laura Fair: Sex, Murder, and Insanity in the Victorian West

On November 3, 1870, on a San Francisco ferry, Laura Fair shot a bullet into the heart of her married lover, A. P. Crittenden. Throughout her two murder trials, Fair's lawyers, supported by expert testimony from physicians, claimed that the shooting was the result of temporary insanity caused by a severely painful menstrual cycle. The first jury disregarded such testimony, choosing instead to focus on Fair's disreputable character. In the second trial, however, an effective defense built on contemporary medical beliefs and gendered stereotypes led to a verdict that shocked Americans across the country. Carole Haber probes changing ideas about morality and immorality, masculinity and femininity, love and marriage, health and disease, and mental illness to show that all these concepts were reinvented in the Victorian West.

Richard Dillon
Tales of the colorful characters who went down to the sea in ships to and from the port of San Francisco.

Rand Richards
A year in the life of San Francisco: 1849. Based on eyewitness accounts and previously overlooked official records, Richards chronicles the explosive growth of a wide-open town rife with violence, gambling, and prostitution, all of it fueled by unbridled greed.