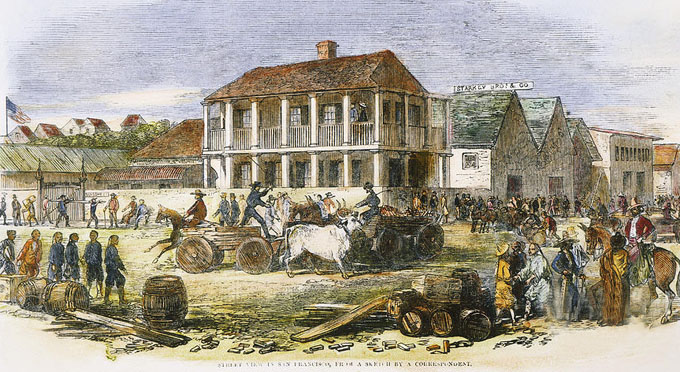 The U.S. Pacific Mail Steamship California, Captain Budd, arrived from Panama on Friday night the 28th inst having left that port on the 5th instant. She brought up 289 passengers, among them a number of ladies. She also brought a large mail.

The excitement relative to California instead of abating appears to have increased and the rush was as grate as ever. We make the following summary of news from our various files:

From the N.Y. Tribune, November 13

At this issue, public attention is forcibly attracted by the unusual amount of intelligence which has reached us at once from almost every part of the world. The most inspiring news of all is that of the established of Freedom in California by the unanimous voice of the thousands of her people. This result has long been looked for at the north, and the consummation elicits a universal expression of delight...

The year 1849 terminates with the setting sun of today and we are about the enter upon the last year of the half century. The events which have transpired during the past twelve months have been wonderful and startling. All Europe has been involved in warfare. Monarchies have been overthrown and blood has flowed like water in the sacred and holy cause of liberty. The treasures of California have caused a movement such as the world never before beheld, and from all quarters of the civilized world the gold seekers have rushed in thousands, by sea and by land, and "the cry is still they come."

Prosperity has smiled upon this continent, and more particularly our portion of it. We have all the deepest reasons for gratitude to Him who has bestowed such bountiful evidences of his goodness upon us and we ought not to be forgetful of it. Oh may the next year be as profitable as the last! We shall commence the new year with the determination to continue our exertions for the daily improvement of our journal, to render it worthy a continuance of the support it has heretofore met with. As it is customary to exchange the compliments of the season, we do not desire to be found wanting in respect and courtesy, and as we publish no paper tomorrow, we take advantage of our present issue, to wish our patrons in all sincerity, a happy New Year!

The Rush for California

October 16, being the day for the sale of tickets for passage in the two new steamers, to be started from Panama to San Francisco by the Pacific Mail Steamship Company, the place of sale; at Howland & Aspinwall's, was the scene of a strife for precedence unequaled even in the wondrous history of the Golden Crusade. As early as 4 o'clock in the morning some twenty persons were sitting on the steps in most neighborly proximity to the door, ready, like hounds in the leash, for the race up stairs. Before the doors opened hundreds had collected, and in a minute after the turn of the key every place where a man could hold on, even by the eyelids, was occupied. So great was the pressure that the balustrades and windows were broken, and each individual, on issuing from the office, gave woeful evidence of the density of the crowd in the shape of caved in hats and torn and disordered clothing. One of the very earliest of those on the steps in the morning and almost the first man inside, did not get out until noon! Some 500 tickets for the two December steamers were run off as fast as the money could be paid over; but the crowd still clamored for more, and about 100 tickets for the steamer of the 1st of January were sold by way of dessert to the feast. The prices were, $300 for the cabin, and $150 for tho steerage. One of the crowd, and the first on the ground, took his post at the wrong door by accident as early as 11 o'clock at night. He found all quiet until about 2 o'clock, when one by one. neighbors happened along like strong drops before a shower. Our early friend made the most pertinacions exertions to get in first, but broader shoulders took precedence, and he was number 30 at the desk. The next day there was another small crowd, who took off all the steerage and a large portion of the cabin tickets for the January steamer.

Reborn in America: French Exiles and Refugees in the United States and the Vine and Olive Adventure, 1815-1865

Before Lewis and Clark: The Story of the Chouteaus, the French Dynasty That Ruled America's Frontier

(Lamar Series in Western History)
Malcolm J. Rohrbough.
The 1848 California Gold Rush drew many wagons west. However, only half of the 300,000 gold seekers traveled by land; the other half traveled by sea. In The Rush to Gold, Rohrbough examines the Gold Rush through the eyes of 30,000 French participants. In so doing, he offers an important chapter to Gold Rush history, which occurred at a time of sweeping changes in France. Hiis extended research in French archives provides an international focus to pivotal events in mid-nineteenth-century America.

Ruined by This Miserable War: The Dispatches of Charles Prosper Fauconnet, a French Diplomat in New Orleans, 1863-1868