Arrival of the Brother Jonathan

The Nicaragua Company's steamer Brother Jonathan arrived yesterday, fourteen days from San Juan, bringing 534 passengers, of whom 139 were ladies. She brings no later dates than have been previously received by the Golden Gate.

Steamer Brother Jonathan left San Francisco at 3 P.M., May 16th; arrived at San Juan del Sur May 29th at 9 o'clock A.M., left San Juan June 3d at 10 o'clock P.M.; June 8th at 12 o'clock P.M., passed steamship Yankee Blade 70 miles north of Acapulco; on the 10th, spoke whaling schooner Emeline, three months out from San Francisco, with 50 bbls sperm oil. June 15th, went into San Diego for coal; detained there 12 hours. Col Grey with his surveying party had arrived, having been successful in finding a most excellent route, having ran an almost parallel line from San Antonio, Texas to the head of the Gulf of California.

The Brother Jonathan brings 534 passengers, 139 of whom are ladies, also 161 packages of Express goods. Has had no sickness on board; the Isthmus was perfectly healthy, and the river had risen sufficiently to afford easy navigation for the river boats. May 20th, married at sea, on board steamer Brother Jonathan, by C. P. Seabury, Esq., Commander, Andrew J. Baily to Miss Augusta Smith, both of Virgin Bay, Nicaragua.

Central America -- The City of San Salvador (State of San Salvador) of 35 or 40,000 inhabitants, was almost entirely destroyed by an earthquake on the 26th of April. All the churches, public buildings, and principal dwelling houses were completely demolished. One hundred dead bodies had been taken from the ruins, and it is supposed that about 200 more were still buried beneath them. The inhabitants were timely warned by previous slight shocks, so as to enable most of them to escape from the city.

The civil war is still progressing in Nicaragua, the invading forces had taken all the principal cities and towns with the exception of Grenada and Rivas, the former of which was occupied by both parties.

When the Brother Jonathan left San Juan there were reports of several killed and a great many wounded; among the killed was Col. Pineda of the invading forces. It was generally supposed that the last mentioned party would eventually be victorious. 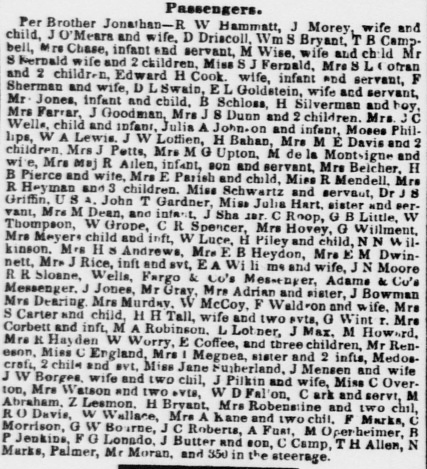