The Royal Mail steamship Zealandia arrived in port yesterday morning, it being her initial trip from the Colonies. Following are her memoranda and list of passengers, furnished by Captain J. S. Ferrils.

The Zealandia on this occasion took the place of the Colima, which lost her propeller on the New Zealand Coast. Having come via Auckland to receive the New Zealand mails and via Kandavu, the passage was lengthened by three days. She has, however, nearly made up the time lost by detour, and, notwithstanding the delay of twenty-one hours at Honolulu, has made the quickest passage on record from the Australian Colonies to California by over two-and-one-half days. It will be observed from the above report that anything but favorable weather was experienced during the voyage.

The distance via Auckland is 7,460 miles, so that an average of twelve knots has been maintained throughout. The Zealandia is the first of the English steamers built by Messrs. John Elder & Co., expressly for this service.

The new British steamer Zealandia arrived today, 28 days from Sydney via Honolulu 7 days and 9 hours. Previous mention has been made of this vessel, and full particulars of her passage to this port will be found elsewhere in the present issue. She made quick time from the Colonies, but too much credit is assumed by the Zealandia's Commander in this respect.

By the Zealandia will arrive another contingent of Australian visitors to Philadelphia, some hundred and fifty in number. Amongst them is the most prominent merchant of the Colonies, who, after some forty years' active business life, takes a holiday to make the acquaintance of his American cousins.

The Hon. J. L. Montefiore has not merely been a leading man in commercial circles and President of the Chamber of Commerce for years, he has been a member of the upper branch of the Legislature, and what the late Mr. Ralston was to San Francisco, Mr. Montefiore has been to New South Wales. All movements having for their end the increased prosperity of his adopted country or the social well-being of its people, have had a full share of his time, his capital and his experience. Such a man will be missed if he decides to spend his leisure years in the old country. There are so few public spirited men here that they cannot be spared from holding in check those who rule of life is the eleventh commandment. 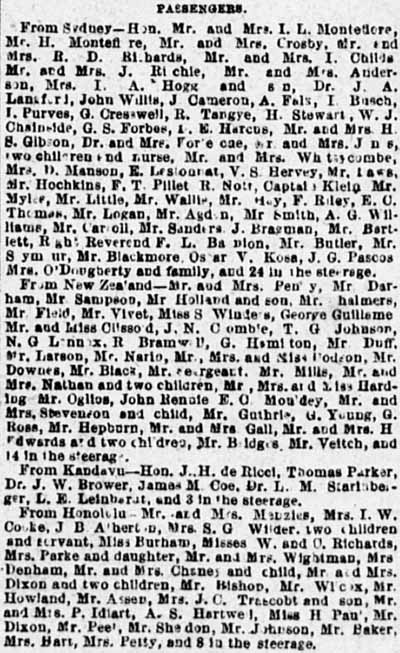