Arrival of the Moses Taylor.

The steamer Moses Taylor arrived yesterday morning about ten o'clock. The list of passengers was published in the Alta of the 11th inst.

The steamer Moses Taylor arrived at Panama Nov. 30th at 3 p.m. Her passengers were immediately disembarked and proceeded across the Isthmus. Received our passengers by the Panama Railroad Company's tugboat also coal and provisions and sailed December 3d at 4 p.m. for Toboga Island; took in water and sailed Dec. 4th, at 5 a.m.. At 7 a. m. (same day) saw the steamer St. Louis about ten miles ahead. Dec. 9th. at 3 p.m. passed the steamer St. Louis, and at daylight next day she was entirely out of sight. The Moses Taylor arrived at Acapulco Dec. 10th at 7:30 p.m. The St. Louis arrived three and a half hours after (at 11 o'clock p.m.).

There were in the port of Acapulco the United States storeship Farallones, and the United States steamer Saganaw. The ship White Falcon was to sail December 12th for San Francisco; the ship Kate Prince on the 11th for Callao: the ship J. G. Southard arrived December 1st and the ship Piscataqua on the 3d. both with coal, from Philadelphia. The Moses Taylor sailed from Acapulco December 11th at 7 a.m.; at noon same day passed the steamer Orizaba, bound down. December 12th. at 6:30 a.m., stopped ship on account of a slight accident to the machinery, which detained us until 8 p.m.; the St. Louis spoke as at 1 p.m. and passed on; arrived at San Francisco. December 20th. at 3 o'clock, a. m . with 684 passengers, all well.

The ship Lela Mansfield had arrived at Aspinwall with 1,200 tons coal for this steamer.

From the Daily Alta California

December 11, 1863
PASSENGERS TO ARRIVE -- The following is the list of passengers of the Moses Taylor who left New York on the steamer Illinois on the 13th November, and are expected to arrive on our about the 17th inst. 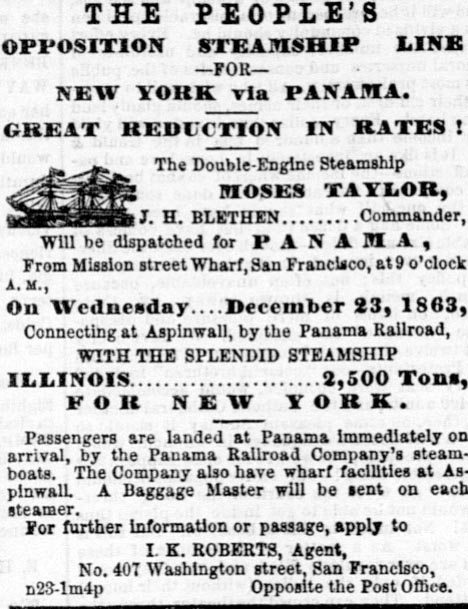 INCREASE IN OUR POPULATION.--The arrival of the steamships Moses Taylor and St. Louis, from Panama, yesteday morning, added from 1,000 to 1,500 souls to the aggregate population of California. The memoranda by the pursers of the two steamships will be found under the proper heading in our columns this morning.

The Age of Gold

The California Gold Rush and the New American Dream

Unearth Your Family's Past:
Genealogy Resources