The British ship Blonde arrived this morning, 63 days from Panama. She brings 300 passengers, and reports 18 deaths on board since leaving.

COALS - For Sale, the cargo of the British barque Blonde, consisting of 500 tons of New Castle, New South Wales. For sale in lots to suit purchasers 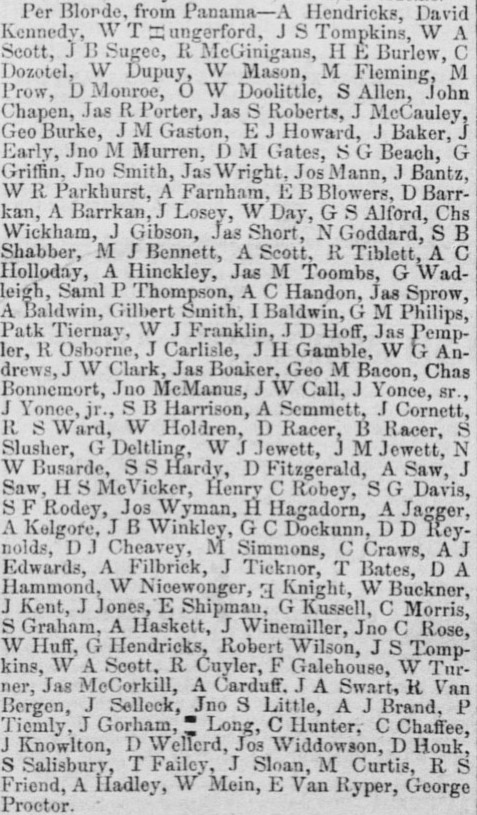 DIED on board barque Blonde, on her passage from Panama to this port:

United States vs. Barque Blonde -- Ordered that Gen S. Porter, Capt. John Hart, and Joseph Eyre be appointed to appraise the above vessel.

United States vs. William Soutter -- Indictment for bringing an excess of passengers on board the Blonde into the United States. Allowed until Saturday next to plead.

Rounding the Horn: Being the Story of Williwaws and Windjammers, Drake, Darwin, Murdered Missionaries and Naked Natives--a Deck's-eye View of Cape Horn

Dallas Murphy
Fifty-five degrees 59 minutes South by 67 degrees 16 minutes West: Cape Horn—a buttressed pyramid of crumbly rock situated at the very bottom of South America—is a place of forlorn and foreboding beauty that has captured the dark imaginations of explorers and writers from Francis Drake to Joseph Conrad. For centuries, the small stretch of water between Cape Horn and the Antarctic Peninsula was the only gateway between the Atlantic and Pacific oceans. It’s a place where the storms are bigger, the winds stronger, and the seas rougher than anywhere else on earth. In Rounding the Horn the author brings the reader along for a thrilling, exuberant tour. Weaving together stories of his own nautical adventures with long-lost tales of those who braved the Cape before him—from Spanish missionaries to Captain Cook—and interspersing them with breathtaking descriptions of the surrounding wilderness,

Few will ever experience such adverse conditions especially considering 1920's square rigger design, the technology and lack of meteorology available to assist the crews manage four masted ships with huge sail plans. Along with the challenging seas, this highly-regarded film was shot when cameras were bulky. Captain Irving is engaging. Actors were not used. This is real footage with real people.