William Henry Brewer was an American botanist. He attended Yale's "School of Applied Chemistry" in 1847. He worked on the first California Geological Survey and was the first Chair of Agriculture at Yale University's Sheffield Scientific School. In 1860 William Brewer, a young Yale-educated teacher of the natural sciences and a recent widower, eagerly accepted an offer from Josiah Whitney to assist in the first geological survey of the state of California. Brewer was not a geologist, but his training in agriculture and botany made him an invaluable member of the team.

He traveled more than fourteen thousand miles in the four years he spent in California and spent much of his leisure time writing lively, detailed letters to his brother back East. These warm letters, presented in their entirety, describe the new state in all its spectacular beauty and paint a vivid picture of California in the mid-nineteenth century. The fourth edition includes a new foreword by William Bright (1500 California Place Names) and a set of maps tracing Brewer's route.

On October 22, 1860, Brewer sailed for California with all the baggage and instruments for the survey, by way of the Isthmus of Panama, reaching San Francisco on November 15, 1860 on the SS Golden Age, Captain James T. Watkins. He was astonished at the size and appearance of the city.

For four years, Brewer had charge of the field parties during the summer, spending the winters in San Francisco working on his notes.

In September 1862, Brewer, with Professor Whitney and two others, made the ascent to the top of Mt. Shasta at 14,400 feet high. They found cedars 20 feet in circumference, sugar pines 4 to 8 feet in diameter and 200 to 250 feet in height, and pitch pines nearly as large.

During his time in Northern California, near the striking Castle Mountains 25 miles south of Mt. Shasta, he found the rare Darlingtonia (above), which he described as "the wonder and admiration of botanists." His field work during 1863 took him 4,243 miles, with a total for the three years of 13,507 miles, of which 6,560 miles were on horseback or mule, and 2,772 miles on foot.

OFFICERS ELECTED: At the annual meeting of the California Academy of Natural Science, held at their rooms, on the 5th inst., the following gentlemen were elected officers for the ensuing year: . . . Recording Secretary, Professor W. H. Brewer . . . "

From Up and Down California in 1860-1864:
The Journal of William H. Brewer (Fourth Edition, with Maps

), Professor Of Agriculture In The Sheffield Scientific School From 1864-1903.

On the 7th day of April last, I found myself stepping from the good ship?Oregon?upon Long Wharf, and for the first time stood upon the soil of the far-famed Queen of the Pacific, San Francisco.

The pleasure with which I walked about your beautiful city I shall not soon forget. Her broad, clean streets. Her long rows of substantially built buildings. Her numerous and spacious markets, abounding with all the productions of California's most productive soil. Her extensive, comfortable and well kept hotels and restaurants, whose tables were groaning beneath the weight of good things for the inner man. The bustle and activity every where observable, particularly about the wharves. The forest of masts, and the number and size of the noble vessels lining her piers or riding peacefully at anchor on the smooth waters of this noblest of harbors, and the energy, activity, and intelligence of the busy, well dressed throng in her streets and shops were viewed with feelings of mingled surprise and admiration and were calculated to induce a belief in the mind of the beholder that he was standing in New York rather than in a city which but yesterday was a mere collection of Mexican huts; an obscure sea-port town, scarcely known to the civilized world. 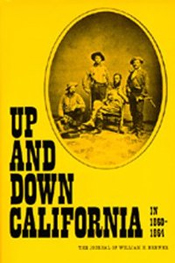 Nor was my surprise lessened when I became aware of the number and size of the public journals of this city. And here permit me to remark, en passant, that in my humble estimation, the Press of San Francisco, both as regards the tone and nerve of its editorial conduct and the number and size and general typographical appearance of its sheets, is a feature of which it may well be proud, and merits the commendation of the young and rising State over whose destiny it wields so mighty an influence.?

Such were some of the impressions with which, on the morning of that beautiful April morning, I took my first survey of this world renowned city. Since then I have passed over a good portion of Northern California, and the sights I saw, together with the "moving accidents by field and flood" which befell me during that memorable pilgrimage have well convinced me that there were more things in heaven and earth

Than were dreamt of in my philosophy.

I could a tale unfold, whose lightest word?
Would harrow up thy soul,
yet perchance the record may not be utterly devoid of interest.

After an absence of eight months, I find myself again in your city. Time has been busy with many things pertaining to her, but not for the worse. "Every breeze whispers change," but the change is all to the improvement of San Francisco. Your wharves have been lengthened and increased in number; the forest of masts in your city is denser and broader; stately edifices have been reared, and your population had steadily and largely increased. The hum of business in your streets and along your wharves has grown louder and deeper, and on every side I see evidences of the rapid strides you are making towards commercial greatness. The public spirit of your citizens is manifesting itself in unmistakable forms, and in now city of its size, I venture to assert, will you find an equal number of wide awake go-ahead business men as in this?

And now I go to seek a home in San Francisco. The weary wanderer in the Northern Mines will to beg for some quiet place in your beautiful city, where in rest and security he may forget the toils and privations of other days; and, sitting in his easy chair, recount to listening friends the oft told tale of by-gone months, finding, like veterans of old, his greatest enjoyment in turning back.

To fight his battles o'er again.

After four years rambling and recording California, William Henry Brewer resigned his position as Professor of Natural Science in the College of California (now the University of California), and accepted the Chair of Agriculture in the Sheffield Scientific School at Yale.

Roaring Camp:
The Social World of the California Gold Rush

Rush for Riches:
Gold Fever and the Making of California
J. S. Holliday

Up and Down California
The Journal of William H. Brewer

Spars and Rigging:
From Nautical Routine, 1849

The Southwest Expedition of Jedediah Smith: His Personal Account of the Journey to California, 1826-1827