Children of the New World are fearless mariners, and they ride the sea of human destiny and pace the deck of the ship of state, at all times with courage and self-possession equal to the most trying emergencies. Though there be committed to their guidance the richly-freighted prizes of the model Republic, to sail on unknown seas, the consciousness of proud skill appears not the less, and with the true alacrity of "hearts of oak" they bend the sail, trip the anchor, and steer for the open sea.

In the darkest night the star of empire and of destiny leads the way. In the roughest gale, the resistless current of predestined fortune impels the good barque onward to the bright goal of human happiness - for the fate of humanity is in her success. The steady wind which fills her sails may bellow hoarsely of shipwreck, and strive to rend the stout canvass which has been crowded on alow and aloft. The flag of the stars is at her peak, and while it flutters we will fly before the gale. Not a sheet shall be slackened nor a sail clewed up, and when something parts, "all hands," as Pat would say, will stand by to take in; but "as long as she cracks she holds," and "what she can't carry she must drag," are, in nautical parlance, the all-animating thoughts of her intrepid crew.

Our country's a ship d'ye see and so long as she is worked by the bone, sinew and spirit of a Yankee crew, as at present, we care but little who commands, how fast the breeze freshens or "what the night cometh on." Sine the tide of golden immigration commenced to flow, and the ship of state was launched on the billow, fair skies and prospering breezes have been ours, and while dashing gloriously on we have scarcely heeded the strength of the current on which we are borne - we have heard but the bells, and noted but the knots of our progression.

So rapid has been the advancement of California, in business and population, such as the importance of her improvement, since she entered upon the broad fulfillment of her destinies, that our faculties of observation of the means emp\loyed in her development have rarely been exercised. While we have intently watched the expanding hopes of our young country, and witnessed their consummation, one after another, with pride and pleasure, we have not paused to realize the magnitude of each step which has been taken to secure for us the fame and wealth which we now enjoy. Every day the evidences of our growing wealth and refinement, advancement in art, and prosperity in every branch of business become more numerous and unmistakable. With a widely extended and increasing Commerce, we will soon combine the powerful resource of wealth which Agriculture every where becomes. This day over one hundred and fifty thousand people are laboring with all the energies with which they are endowed in the development of our wealth as a vast and powerful state.

The din of industry is incessant and is heard throughout the length and breadth of the land. Towns and cities are springing up, and assuming importance in population and amount of business; the wealth and might of our older cities and seaports are increasing with stately grandeur; farms and mining tracts are being laid out and improved, and traffic in the produce of our soil, agricultural as well mineral, is already quite brisk. Mills are in course of erection, bridges and roads are being constructed, and everything within the new State denotes contentment, harmony of action, enterprise and unexampled progress.

To the spirit which has pushed these enterprises are we also indebted for the facilities which we enjoy of constant and uninterrupted communication between the prominent points of business and trade, throughout California. The power of steam has been called to our aid, and the intercourse which the past few months has opened, in our widely distributed society, has brought incalculable good to bless the paths to our prosperity. But there has been no branch of enterprise within the past two years, more successfully conducted, fought with more signal good results, and worthy greater admiration than the Navigation of our rivers, and the harbors on the coast.

Without any outlay of public means, any consolidation of interests or associated effort, our rivers have been thoroughly and satisfactorily explored, and their navigability determined to the highest point that, even during the season of flood, may be reached by vessels of ordinary draught. A distance of over two hundred miles from the mouth of the Sacramento, up that stream, has been explored, and its channel, in different stages of the water, correctly ascertained. Sixteen months since the first square rigged vessel, a bark of about two hundred and fifty tons, proceeded from this place to what was then the almost uninhabited site of Sacramento City. A few months anterior to this the storeship Southampton sailed to Benecia, and was the first vessel of her tonnage to cross the bay. One hundred miles above Sacramento City may now be seen vessels exceeding six hundred tons in burthen, while along the banks at the above city about one hundred and fifty sea going vessels, of various dimensions, are snugly moored. Benicia is the depot of army and navy supplies, where a portion of the Pacific squadron at present rides at anchor, and the steamships of the Panama line visit the quiet town occasionally.

The San Joaquin and its tributaries, like the rivers of the Sacramento Valley, have been explored to the farthest extent of navigable water. Some first class vessels are laid up at Stockton, and the river trade carried on by boats, brigs and schooners from this place during the past twelve months has been brisk and profitable. At the mouth of the San Joaquin, lying oft New York of the Pacific, a number of sea going vessels of the largest class remind us of the enterprise that traced and buoyed out a splendid ship channel in Suisun Bay, leading from Carquinez Straits to the above advantageously located city site.

At the head of the Bay of San Francisco comes in the Arroya, which flows past San Jose, our State capital, and this meandering brook was visited last winter by the brig Belfast; ten miles from its mouth several store ships are at this time anchored. We mention this fact as happily illustrative of the disposition to leave nothing unattempted, which has actuated exploits and enterprises in inland navigation in this country. The Arroya above mentioned is a dull stream, averaging perhaps eight yards in width.

On the coast, a few hundred miles north of this place, an extensive bay has been discovered and explored, and pronounced to be one of the finest harbors in California. Several rivers emptying into the sea in this vicinity, have been entered at the sacrifice of human life, but results of benefit to our country have been derived, and the spirit of its progression demands of the undaunted triumph in all that is attempted.

Columbia River in Oregon, has been successfully navigated this year. A new and Southern Channel has changed the complexion of the dangers complained of by navigators. They are either so numerous nor so much to be dreaded, as before.

If this cursory glance at the subject will induce reflection upon the enterprises which have been pushed in matters of inland navigation, and outland survey, the success which has been achieved in the short time elapsed since the work was begun will appear almost incredible. We might amplify the subject by recurrence to events in character, and by adding in detail facts fresh in memory, connected with the earliest history of the navigation of our waters, but we have already extended our observations beyond the space which we purpose to occupy, and close, although we may resume the subject at some future day.

The Way of a Ship: A Square-Rigger Voyage in the Last Days of Sail 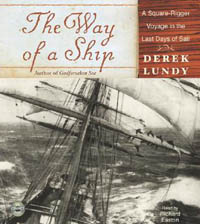 Based partly on the experiences of his great great uncle, an Irish sailor, Derek Lundy recreates the voyage of a merchant sailing ship -- the Beara Head -- around Cape Horn in the 1880s. The Way of a Ship is a white-knuckle journey around the notorious "graveyard of ships," and a gorgeous evocation of a bygone era, depicting not only the dangerous day-to-day life aboard a square rigger, but also how the ascendancy of steam ships ultimately rendered commercial sailing vessels obsolete, as The Age of Sail gave way to The Age of Steam.

The "beautiful, widow-making, deep-sea" sailing ships could sail fast and carry substantial cargo, but were vulnerable to weather and the sea's many dangers. Life at sea was often brutal and relentless; seamen were sleep-deprived and malnourished, at times half-starved.

Paul Robert Walker
Meticulously researched, with specially-commissioned illustration, detailed reconstructions and original artwork from each period, reading lists, and resources for further study, this is an immersive introduction to the history that shaped America. In 1848, carpenter James Marshall made a chance discovery: a few shiny flakes-of gold in a riverbed he was digging. Within a year 800,000 gold-seekers from all over the world were on their way to California. The Gold Rush was on.

Freaks of Fortune: The Emerging World of Capitalism and Risk in America

Jonathan Levy
Until the early nineteenth century, "risk" was a specialized term: it was the commodity exchanged in a marine insurance contract. Freaks of Fortune tells the story of how the modern concept of risk emerged in the United States. Born on the high seas, risk migrated inland and became essential to the financial management of an inherently uncertain capitalist future. Focusing on the hopes and anxieties of ordinary people, Jonathan Levy shows how risk developed through the extraordinary growth of new financial institutions - insurance corporations, savings banks, mortgage-backed securities markets, commodities futures markets, and securities markets - while posing inescapable moral questions. At the heart of risk's rise was a new vision of freedom. To be a free individual, whether an emancipated slave, a plains farmer, or a Wall Street financier, was to take, assume, and manage one's own personal risk. Yet this often meant offloading that same risk onto a series of new financial institutions. Levy traces the fate of a new vision of personal freedom, as it unfolded in the new economic reality created by the American financial system.