Dogs and Cats and Rats and Bummer and Lazarus

DOGS AND RATS. -- The scarcity of the former animals and the plenty of the latter in this city, is a cause of great annoyance. Long time ago, and old rat occasionally stalked across the Plaza, but did no mischief; but since vessels from all parts of the world have commenced coming here, rats of every size, shape and color, from the deepest black up to the purest white, have been imported into our midst, and make sad havoc among the wares, goods and chattel of our merchants and store keepers. We were informed a few days since by a merchant, that the damage done in this town by rats could not be less than five hundred dollars per day -- tearing open bales, eating off corners, and performing a variety of maneuvers very interesting to themselves no doubt, but decidedly disagreeable to the owners of property destroyed. In traveling along the streets at night, the pedestrian will often run against them as they are pursuing their mad gambols on the planks of the streets.

A number of good rat dogs in San Francisco would be of great value, and it is a little singular that among the many speculations that have been entered into in California, this one should have been neglected. Some cats have been brought up the coast by some shrewd geniuses, but the cats of the southern coast appear to be a little frightened at the enormous rats of San Francisco, and hardly dare attack them. Good terrier dogs would be the best cure for the evil. There is a dog that is well known in this city by the name of Tips, an English terrier, whose sole delight is to hunt out and destroy rates. In pursuance of this interesting occupation, he will neglect food, friends, shelter, and all the comforts of dog-life, amply repaid if he succeed in digging out from his hole some one of the rat tribe, the mortal enemy of his race. Mr. J.B. Bidleman of this city, has recently sent home for a number of splendid rat dogs, which will prove of great value here. 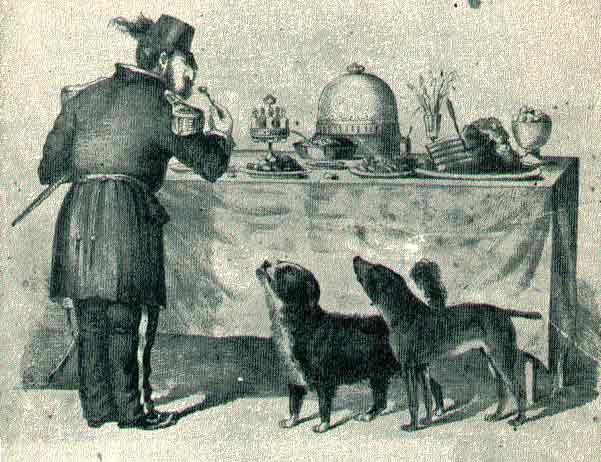 Emperor Norton dines regally at one of the magnificent free-lunch counters of the day,
as Bummer and Lazarus look hungrily on.

Norton was a merchant who went mad after going bankrupt. He proclaimed himself "Norton I, Emperor of North America and Protector of Mexico." San Francisco indulged him in his madness. He roamed the town freely, inspecting his realm in a lordly way, levied small taxes on businessmen, which they obligingly paid, and issued stately proclamations, which the newspapers solemnly published.

Bummer and Lazarus have been sometimes described as having been Emperor Norton's dogs, but they were not; it is possible that Jump's cartoon may have engendered that notion. Bummer, a black Newfoundland of a sort, with a white stripe, first came to the city's attention one day in 1861 when he slew an epic number of rats that had swarmed out of an excavation outside the Blue Wing Saloon.

A dog of great dignity and presence, as well as valor, he patrolled a regular beat down Montgomery Street, where he would present himself at restaurants to be fed. Lazarus was, as Mark Twain wrote, Bummer's "obsequious vassal" -- a cur whom Bummer rescued during a fight one day and who thereafter attached himself to Bummer and went everywhere with him.

Because of their skill as rat catchers, Bummer and Lazarus were spared the pound master, who routinely rounded up unlicensed dogs (and occasionally a pig). The story is that they met when Bummer rushed into the middle of a dog fight (literally) and saved Lazarus from the teeth of a stronger dog. Between 1861 and 1865, there were fed and cared for by the citizens of the City, written up quite frequently, and included in a cartoon series.

DAMAGES BY A CITY GUEST. -- The canine paupers, Bummer and Lazarus, having been granted the freedom of the town by our City Fathers, the latter of course are responsible for their good behavior, and liable for their misdeeds. Lazarus got locked in Rosenfield's Stationery Store, on Montgomery Street, yesterday, having hid himself to get a good "snooze." Towards night he awoke to find himself in secure quarters. He tried to break jail but it was no go. He dashed his head against the thick plate glass, cracking it in several places, then jumped on the cases, and smashed up various delicate and valuable articles with perfect recklessness. Bummer came along, but could give him no aid, and at midnight Lazarus occupied the show window bench, whilst his brother kept watch outside. The town may have a nice little bill of damages to pay for these canine pranks!

The lamented Lazarus departed this life about a year ago, and from that time until recently poor Bummer has mourned the life of his faithful friend in solitude, scorning the sympathy and companionship of his race with that stately reserve and exclusiveness which has always distinguished him since he became a citizen of San Francisco. But, for several weeks past, we have observed a vagrant black puppy has taken up with him, and attends him in his promenades, bums with him at the restaurants, and watches over his slumbers as unremittingly as did the sainted Lazarus of other days. Whether that puppy really feels an unselfish affection for Bummer, or whether he is actuated by unworthy motives, and goes with him merely to ring in on the eating houses through his popularity at such establishments, or whether, or whether he is one of those fawning sycophants that fasten upon the world's heroes in order that they may be glorified by the reflected light of greatness, we cannot yet determine. We only know that he hangs around Bummer, and snarls at intruders upon his repose, and looks proud and happy when the old dog condescends to notice him. He ventures upon no puppyish levity in the presence of his prince, and essays no unforgiving familiarity, but in all respects conducts himself with respectful decorum which such a puppy so situated should display. Consequently, in time, he may grow into high favor.

A DOG THAT KILLS CRABS.

A large number of highly accomplished dogs have their homes in the vicinity of North Beach, but only one of the lot makes a specialty of killing crabs. His name is Sport, and he is a cross between a Newfoundland and setter.

On almost any day Sport can be seen on the Powell-street wharf watching the crowds of fishermen. Some went crabs, but most of them do not, and if by chance they manage to hook one it is thrown on the wharf. In an instant Sport is playing for an opening in front of the enraged crustacean, and for several minutes there is a lively battle.

Sport always makes an attempt to get his teeth in between the daws of the crab and drive his fangs into its brain. This, however, is not always easy for him lo do as the crab will make a hard fight for its life. At times Sport will receive many scratches before he succeeds in ending the life of his antagonist. His jaws are always cut, but never so badly as to render him unfit to tight.

Whenever there is a contest between Sport and a crab the fishermen on the wharf will allow their lines to take care of themselves while they watch the struggle. A circle will be formed around the antagonists and the onlookers seem to get as much pleasure and excitement out of it as they would out of a cockfight. Many bets would undoubtedly be made except for the fact that the death of the crab is such a certainty.

Numerous attempts have been made to get other dog's to attack the crabs, but have always resulted in failure. The ordinary dog concludes he has had enough the moment he feels the sharp claws in his jaws and draws out of the contest, leaving the crab to be finished by Sport.

Milk and Chicken for Mickey

Mickey is one of the vagrant dogs that have adopted Meiggs wharf as their home. They lie around the large office and earn their keep by acting as doormats for the government officials attached to the immigration, customs and quarantine services. Their board is an uncertain quantity varying In inverse ratio with the appetites of Heine Benges, Mike Fitzgerald, James Black and other bon vivants of the Meiggs wharf colony. Mickey, however, is now living on the fat of the land.

Two days ago, while struggling with Bum, the dean of the canine colony, for a sandwich Jettisoned from Jimmy Black's lunch basket, Mickey sustained a fracture of his right foreleg.

When anybody belonging to the Meiggs wharf colony gets hurt an appeal is made to the quarantine doctors stationed there and when Heine Benges took the disabled Mickey to Dr. King, Mickey got the best the marine hospital service could give. Dr. Terry volunteered his assistance, and between them the medicos reduced the fracture and housed it snugly in a plaster cast. The break was near the shoulder and it was necessary to make a cast that included part of the dog's body.

The other dogs are still fighting for their board, but Mickey now sits in a sunny spot and feasts at his leisure on milk and chicken.