An Old Shoemaker Who Lives Alone on a Hulk in China Basin.

Years ago when the steamer Oriflamme was in service she was considered large enough to accommodate 200 or 300 men. Now, although she measures the same from stem to stern, there is only room on her for one man, at least that is what the man thinks. In her day the Oriflamme was a good ship, but for the last ten or fifteen years she has been but a dilapidated hulk, lying in the mud back of the Arctic Oil Company's works. The man who needs the whole of the vessel for his accommodation is an old German, scarcely able to speak English, who refuses to tell his name, but is referred to by the people in the vicinity as "Mike," incongruous though the name be. 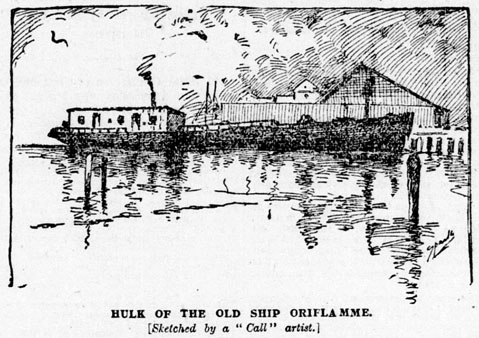 It is a little over a year since Mike took possession of the hulk. He says that he rented it from the owner and intends to have the full use of it. His first work was to put up several notices, such as, "Keep off," "No admittance," "Loafers not allowed," etc. In several places he painted a rude representation of a skull and cross bones as a deadly warning to all trespassers.

After Mike had the notices fixed to suit him he constructed a rude house on the stem of the hulk. It is made of all sorts of odds and ends of lumber that he found in the vicinity, and presents a most dilapidated appearance. It is here that he lives alone and works at his trade of shoemaker. Every few days he takes his finished work to town and brings back more to do.

If nobody attempts to board Mike's domain, he may not venture where he can be seen for days at a time; but should a stranger dare to set foot on the edge of the hulk he will be greeted with a howl of indignation mingled with all the well-known oaths of the Fatherland. If the trespasser understands German he will quickly make his escape, but if he don't and attempts to explain in English, Mike will unceremoniously attack him with his shoemaker's hammer that he always carries with him on such occasions -- that is, provided the man is not larger than Mike, who weighs 170 pounds. There is a man who has always fished from the old hulk and Mike never says a word. The man is a well-built young giant and weighs over 200 pounds.

Why the old man should wish to make his home on the decaying hulk is a mystery. The vessel is so far gone that it is hardly worth breaking up for firewood. The timbers have rotted to such an extent that the first sou'easter is likely to break it to pieces and endanger the occupant's life. Mike has been warned of this by the longshoremen, but it has had no effect, except to increase his vigilance at keeping sway trespassers.

Old Mike has never been known to have a friend. He owns a dog, but the creature is afraid of him and would most likely make its escape were it not tied. Mike is disliked by the neighbors and some of them whisper that he has treasure concealed in the depth of the old vessel he guards to carefully.