Cruelty On The High Seas

CRUELTY ON THE HIGH SEAS
The Cyrus Wakefield a "Hell Ship."
OFFICERS TO BE PROSECUTED
SECOND MATE LEONARD HAS LEFT THE VESSEL.
Sailors Say They Were Beaten, Wounded and Ill-Treated
From the Time the Ship Left Baltimore.

Another "hell ship" reached port yesterday. According to the crew of the Cyrus Wakefleld a tougher set of officers never commanded a vessel, and if there is any law in the land the sailors intend to make Captain Henry, First Mate Williamson and Second Mate Leonard answer for their brutality. The record of the voyage from Baltimore to San Francisco is to be laid before the United States District Attorney to-day and warrants sworn out for their arrest. United States Marshal Shine will have some trouble in locating Second Mate Leonard, as he disappeared yesterday as soon as the ship dropped anchor.

The Cyrus Wakefield left Baltimore four months ago and during the entire passage, according to the sailors, there was hardly a day passed but one of them was beaten and ill used. J. A. Jansen came ashore yesterday afternoon with his nose swollen and his face marked with blood from a blow he received from the mate while the ship was entering port. His offense was letting a drop of varnish fall on the deck, and for that he was knocked down and kicked.

"I have traveled in some pretty hard ships, but the Cyrus Wakefleld takes the cake," said the boatswain yesterday. "The first day out Paul Peterson was knocked down with a knuckle duster and brutally beaten by the captain, mate and second mate. I really believe they would have killed him if the unfortunate fellow had not escaped aloft. Charlie Mattson was on the main crosstrees doing some work and was not getting along fast enough to suit the second mate. Leonard went aloft and struck him a blow with a scraper, almost knocking him overboard. Had it not been for P. Webb, who caught him when he stumbled, Mattson would surely have gone to Davy Jones' locker.

"A few days later Second Mate Leonard had a row with Webb and struck the latter on the face with an iron punch, almost putting his eye out. While he was down. First Mate Williamson called out 'Kick the life out of the lazy sailor,' and the second mate answered, 'I'd kill him if we were only going to Hongkong.'

"When they got tired of beating us they started in and threw our clothes overboard, and when the men said they would have the law on them Second Mate Leonard laughed and said. 'We're going to Frisco; there's no law in that hole. Part of the evidence we have against them is the belaying pin which did most of the damage. There is hardly one of us but has felt its weight, and nearly all of us have marks on some portion of our body left by it. Herman Lensky secured it before he left the ship. The second mate hit him over the arm with it on one occasion and laid him up for a week. Leonard has been on other ships and was formerly known as O'Connor. He went ashore first thing with the captain yesterday morning, but we will catch him if we have to hunt him from one end of California to the other. We tried to have the harbor police arrest the three officers but they would not do it, saying we would have to get the United States Marshal to do that. Well, we are going to do that, and we will soon find out whether there is any law in California or not.

Captain Henry says that the men were the worst lot of kickers that ever sailed on a ship. Many of them had never been to sea before, and only two or three of them were "A. B.'s." He denies the stories of brutality in toto, and says that while one or two of them may have got an occasional cuff they did not get half what they deserved. The chances are that the whole matter will be aired before United States Commissioner Heacock tomorrow.

SAN FRANCISCO. August 31 To-day members of the crew of the bark Cyrus Wakefield, which arrived here last night from Baltimore, swore out warrants for the arrest of First Mate F. Williamson and Second Mate Leonard, charging them with brutality, assault and other violations on the high seas. The members of the crew tell of horrible cruelties practiced by the officers of the vessel. They accuse the mates of gross cruelty, and say that the use of belaying pins and brass knuckles upon the persons of sailors was an everyday occurrence and many of them display scarred heads, swollen faces and other evidences of violence to back up their pitiful story.

Two Fast Ocean Voyages Out of This Port: The Cyrus Wakefield in 100 days to New York. Another very fast run was that of the American ship Cyrus Wakefield. She sailed from here on September 27 and arrived at New York yesterday. While making port she struck on a rock, but floated off without injury at high tide. When last here the Wakefield was purchased by John Rosenfeld's Sons and she now flies the house flag of that well-known firm.

LONDON, June 28. The ship Cyrus Wakefield, from New York for San Francisco, put into Stanley Islands June 18, slightly damaged, and it was reported that Captain Henry, who had sailed in her, was dead.

Picked Up a Shipwrecked Crew.
Special Cable to The Call and the New York Herald.
Copyrighted, 1899, by James Gordon Bennett.

MONTEVIDEO. June 25.-The German steamer Modestia arrived at this port today from the Falkland Islands, carrying with her the crew of the American ship John R. Kelly, which was wrecked near Port William. Her captain and family continued the voyage to San Francisco aboard the American ship Cyrus Wakefield, which suffered also by storm. The Wakefield's captain died near Cape Horn.

Captain F. T. Henry of the American ship Cyrus Wakefield is dead. A cable to the Merchants' Exchange states that the Wakefield put into Port Stanley, Falkland Islands, on June 18 with the captain's body. The vessel was slightly damaged in a storm, but whether Captain Henry was killed during the gale or died from natural causes is not known. The deceased's family lives at 708 Golden Gate avenue. Captain Henry was one of the best known masters that came to this port. He had been in the trade between New York and San Francisco for years and was on his way here from the East when be died.

CAUGHT IN A STORM OFF CAPE HORN. The American ship Cyrus Wakefleld, now on her way here from New York, has been particularly unfortunate this voyage. Heavy weather was encountered off the Horn, and in consequence the vessel was damaged and had to put into Port Stanley. Captain Henry died and was burled while the vessel was in the Falkland Islands. Captain Chapman of the American ship John R. Kelley, that was wrecked in Port Stanley, is bringing the Cyrus Wakefield to San Francisco. 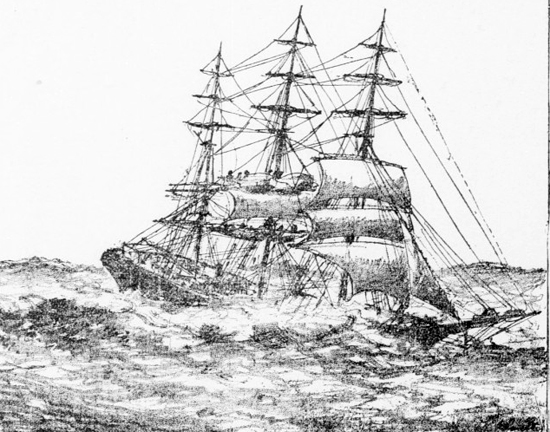 About two years ago the Cyrus Wakefleld was caught in a heavy storm off the cape and was badly strained. On her arrival here she had to undergo extensive repairs. At that time, Captain Henry furnished Mr. Coulter with a description of the vessel as she appeared in a Cape Horn storm.

DASHED TO HIS DEATH BY A MONSTER WAVE

PORT TOWNSEND, August 14. Mail advices From Falkland report that the American ship Cyrus Wakefield arrived at Port. William on June 18 with Captain Henry dead and the mate severely injured. The Wakefield encountered a heavy storm and shipped an immense sea, which caught both the captain and mate and dashed them against the cabin. The captain died from his injuries. The mate, though severely injured, will recover. At Port William Captain Henry's body was placed in a metallic coffin. It will be taken to San Francisco, his home, on the Wakefield, of which Captain Chapman of the wrecked John R. Kelly was placed in command.

Trees in Paradise: A California History

Jared Farmer
California now has more trees than at any time since the late Pleistocene. This green landscape, however, is not the work of nature. It's the work of history. In the years after the Gold Rush, American settlers remade the California landscape, harnessing nature to their vision of the good life. Horticulturists, boosters, and civic reformers planted millions of trees to create groves, wooded suburbs, and landscaped cities in bare countrysides. They imported the blue-green eucalypts whose tangy fragrance was thought to cure malaria. (It does aid in keeping vermin out of your home should you includes stalks in your bouquets.) They built a lucrative "Orange Empire" on the sweet juice and thick skin of the Washington navel, an industrial fruit. They lined streets with graceful palms to announce that they were not in the Midwest anymore.

Andrew Rolle, Arthur Verge
This eighth edition covers the history of the Golden State, from before first contact with Europeans through the present; an accessible and compelling narrative that comprises the stories of the many diverse peoples who have called, and currently call, California home. Explores the latest developments relating to California’s immigration, energy, environment, and transportation concerns. Features concise chapters and a narrative approach along with numerous maps, photographs, and new graphic features to facilitate student comprehension. Offers illuminating insights into the significant events and people that shaped the complex history of a state that has become synonymous with the American dream. Includes discussion of recent – and uniquely Californian – social trends connecting Hollywood, social media, and Silicon Valley.

Conquests and Historical Identities in California, 1769-1936

Lisbeth Haas
Spanning the period between Spanish colonization and the early twentieth century, this well-argued and convincing study examines the histories of Spanish and American conquests, and of ethnicity, race, and community in southern California. Lisbeth Haas draws on a diverse body of source materials (mission and court archives, oral histories, Spanish language plays, census and tax records) to build a new picture of rural society and social change.

Contested Eden:  California Before the Gold Rush
(California History Sesquicentennial Series)
Ramon A Gutierrez, Richard J. Orsi
The essays investigate traditional historical subjects and also explore such areas as environmental science, women's history, and Indian history. Authored by distinguished scholars in their respective fields, each essay contains excellent summary bibliographies of leading works on pertinent topics. This volume also features an extraordinary full-color photographic essay on the artistic record of the conquest of California by Europeans, as well as over seventy black-and-white photographs, some never before published.

A Golden State: Mining and Economic Development in Gold Rush California
James J. Rawls
The Gold Rush was a multiplier, an event that accelerated a chain of interrelated consequences that in turn accelerated economic growth. But it also touched a deep-seated nerve in the human psyche and unleashed economic forces, for good or ill, that transformed California forever into a Golden State.