Maritime Museums Outside of the United States

The Museum is located in the 1941 Municipal Ferry Terminal, now on the National Register of Historic Places. From 1941-1963, a ferry system transported thousands of passengers to the canneries, shipyards, and military bases on Terminal Island. From there they could make connections to neighboring cities and towns. Their collections include model ships and boats, fishing and canning in Los Angeles, Naval Collections, and sailor art.

The Maritime Museum of San Diego enjoys a worldwide reputation for excellence in restoring, maintaining and operating historic vessels. The museum has one a fine collection of historic ships, including the world’s oldest active ship Star of India. Their collection of ships and exhibits are available for daily public tours.

San Diego was a port for sturdy wooden medium clippers out of Searsport and Bath; iron and steel ship and barks hailing from Dundee and Liverpooom London and Trondl and Havre and Bremen - and frhjem and Barry. They brought steaming coal from New South Wales and blacksmith coal (which had to be watched for spontaneous combustion) from Pennsylvania; they brought steel and glass and cement from Continental Europe, and there was a veritable armada of small schooners from the "dog-holes" of Northern California's Mendocino coast, with redwood from which to build a city.

San Francisco Maritime National Historical Park is located on the edge of San Francisco Bay in the Fisherman's Wharf and Ghirardelli Chocolate Factory neighborhood. Begin at the Visitor Center, 499 Jefferson Street at the corner of Hyde Street. There, Park Rangers will help you plan your visit. From the Visitor Center, cross Jefferson Street to Hyde Street Pier and visit the park's collection of floating historic ships. From Hyde Street Pier, take a short stroll across the park to the Maritime Museum located in the ship-shaped Aquatic Park Bathhouse Building. The Maritime Historical National Park, which is adjacent to the Museum, has a few historical vessels. Some are open to the public: The Balclutha hosts shanty-sing-alongs throughout summer, and the Pampanito is available to scout troops for overnight adventures.

The San Francisco Maritime Library at Fort Mason has an extensive collection of reference materials for researchers. It is filled with photos, historical papers, books on California maritime history, photographs and additional information on the ships listed at this site. Well worth a visit and open to the public; call first as the Librarian may have to meet you there. The Maritime Research Center provides access to the library, archives and museum collections and encourages research in maritime history and humanities.

Along San Francisco's Waterfront
near Fisherman's Wharf and Aquatic Park

On December 29, 1929, Edward E. Bradley, an industrialist, Carl C. Cutler, a lawyer, and Dr. Charles K. Stillman, a physician, signed the papers incorporating the Marine Historical Association, today known as Mystic Seaport. Their dream: create a dynamic, educational institution to preserve America s maritime culture and turn the achievements of a past era into an inspirational force for the future.

Over the next 50 years, Mystic Seaport experienced explosive growth, amassing the world’s largest collections of maritime photography (over 1 million images) and boats (nearly 500), as well as collecting two million other maritime artifacts.

And the 1970s saw the creation of the Henry B. duPont Preservation Shipyard, additional exhibition buildings and several new accredited educational programs. By the 1990s,

Mystic Seaport is one of America's leading maritime museums. In 1996, Mystic Seaport created a six-week seminar entitled America and the Sea, which encouraged college professors from around the country to incorporate maritime history into their teachings.

Charles W. Morgan (right) is the last of the American whalers. She is also the oldest commercial ship still afloat only one ship in the U. S. is older and that is USS Constitution, the Navy frigate launched in 1797.Morgan was originally built and launched in 1841 in New Bedford, Massachusetts, then the whaling capital of the world. As one of over 2,700 whaling ships in the American fleet, she spent 80 years, or 37 separate voyages, hunting whales. She was known as a lucky ship because she always returned a profit regardless of rough seas, storms, or cannibals. Whaling expeditions often lasted three years or longer before returning home.

Thousands of ships left the East Coast hunting whales. Mystic Seaport has copies of original lists printed from the newspapers of the day.

TO THE PUBLIC: We issue this morning the first number of the "Whalemen's Shipping List and Merchant's Transcript." It is our intention to present to our readers, a weekly report carefully corrected from the latest advices, of every vessel engaged in the Whaling business from ports of the United States ... we have been led to beleive that a paper of this kind would be interesting to ship owners and merchants, and not less so to the parents and wives anthe sisters, sweethearts and friends of that vast multitude of men, whose business is upon the mighty deep, and who are for years separated from those to whom they are dear. Tuesday will hereafter be the regular publication day of the "Whalemen's Shipping List." together with the prices current of our staple commodities. 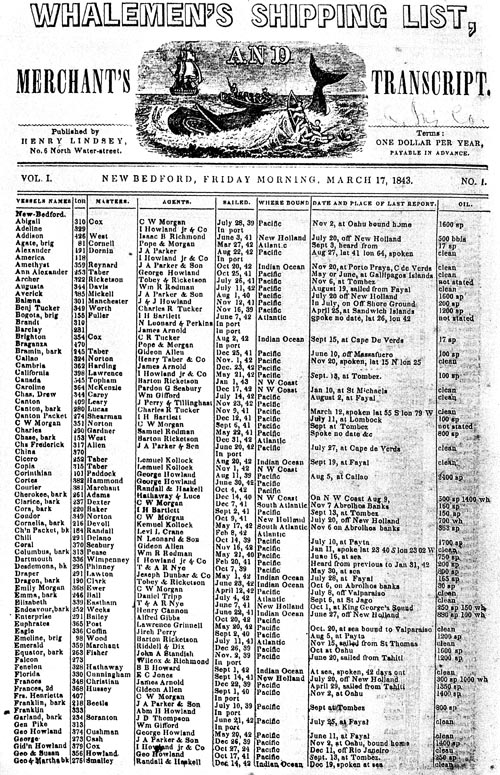 The Havre de Grace Maritime Museum is situated where the Susquehanna River meets the Chesapeake Bay. It tells the story of this region s rich maritime heritage. Teeming with numerous species of flora and fauna and having highly navigable waters, this unique environmental setting has been the perfect backdrop for generations of inhabitants- from the earliest Native Americans over 10,000 years ago, to the first European colonists in the 1600 s, to today s thriving community of the 21st century. In 1782, the Marquis de Lafayette is said to have looked down over the town as he rode along the Post Road and commented that it was a charming Havre de Grace . (Pronounced "Haver-dee-Grayce"). Our mission is "To Collect, Document, Preserve, and Interpret the maritime skills and cultural heritage of the Lower Susquehanna River and Upper Chesapeake Bay region.

Established in 1800, Charlestown Navy Yard served the fleet with distinction--especially proving its worth in each of the nation's wars--until its closing in 1974. The men and women of its workforce built more than 200 warships and maintained and repaired thousands. From its inception the yard was in the forefront of shipyard technology, from building the Navy's only ropewalk to making itself a center of missile and electronics conversions. In its 174-year history, Charlestown Navy Yard played an important role in the birth, growth, and continued effectiveness of the U.S. Navy.

When the Charlestown Navy Yard closed in 1974 after nearly 175 years of serving the fleet, 30 acres became part of Boston National Historical Park. The National Park Service now maintains an important part of the ship yard, and as part of the Park Service's interpretive program, USS Constitution, in connection with the United States Navy, and USS Cassin Young are preserved as representatives of the kinds of vessels built in this yard. Together they represent a 200-year-old tradition of building fine ships for the Navy.

The Maritime & Seafood Industry Museum was established in 1986 to preserve and interpret the maritime history and heritage of Biloxi and the Mississippi Gulf Coast. It accomplishes this mission through an array of exhibits on shrimping, oystering, recreational fishing, wetlands, managing marine resources, charter boats, marine blacksmithing, wooden boat building, netmaking, catboats/Biloxi skiff, shrimp peeling machine and numerous historic photographs and objects. The Museum has brought life to local maritime history and heritage by replicating two 65′ two masted Biloxi Schooners. Examples of living maritime history, they sail the Mississippi Sound and waters of the north central Gulf of Mexico almost daily.

On the banks of the scenic Tchefuncte River in Madisonville, the museum brings Louisiana’s maritime history to life through unique interpretive programs, exhibits, and publications. These programs include the time honored craft of boat building, hands-on field trips, constructing underwater robots, restoration of the Tchefuncte River Lighthouse, and other exciting educational opportunities for people of all ages. The Wooden Boat Festival is held in October on the Tchefuncte River featuring over 100 wooden and classic boats. From canoes to pirogues, from bateaux to steamboats, Louisiana’s unique maritime history and culture has it all. Native Americans, European explorers, and early settlers depended upon Louisiana’s extensive bayous, rivers, and lakes as the pathways of survival, linking the interior with the sea. These waterways represented the connections among people, the connections of life.

One of our all-time favorites; during a "theatre" trip to New York, we stayed at the bottom of Manhattan. Locating this museum was a pleasant accident as we wandered along the waterfront. Founded on May 22, 1967, and revitalized under the management of the Museum of the City of New York, the South Street Seaport Museum features three floors of galleries in Schermerhorn Row opened on January 25, 2012, with 16 historic and contemporary installations interweaving the city, the sea, and the Seaport neighborhood.

Visit the lightship Ambrose and schooner Pioneer, as well as the 19th-century letterpress print shop Bowne & Co., Stationers. Thousands of children and teachers have participated in education programs, and a lively lectures, symposia, and tours is underway.

Until the latter half of the 20th century, ships played a significant and historic role in the growth and development of New York City. Dutch ships during the colonial period moored around the “Great Dock”, whose approximate location would be today’s South Ferry. Small boats launched off the Great Dock to reach larger boats anchored offshore. Until the 1770s, the Great Dock was the only dock that projected out into the water. The area around the Seaport was a swampy wilderness situated a half-mile north of the original Dutch settlement.

South Street Seaport was called “the port of New York” during its greatest period of success between the years 1815 and 1860, right before the Civil War. The advent of the ocean liner, a collection of ships that would cross the Atlantic on regular, fixed schedules contributed to the Seaport’s establishment as a major commercial port. Prior to the ocean liner, it was a rare event for ships to arrive and depart on schedule. Ocean liners such as the Black Ball Line, Red Star, and Blue Swallowtail began to sail between New York and Liverpool on set days, and South Street became the busiest port in America to receive goods from across America, Europe, and Asia. New York’s shipping business eventually centered along the Hudson River during the early 20th century, and Seaport redevelopment began in earnest during the late 1960s.

Philadelphia's only maritime museum: Nautical art, interactive exhibits, the Workshop on the Water, and two historic ships - the cruiser Olympia, the oldest steel warship still afloat in the world and the WWII-era submarine Becuna.

The Texas Seaport Museum is home to the celebrated 1877 tall ship Elissa, a floating National Historic Landmark which has also been designated one of America’s Treasures by the National Trust for Historic Preservation.

Located in the historic port of Galveston, the Texas Seaport Museum also tells the story of a rich legacy of seaborne commerce and immigration. Look for ancestors with a one-of-a-kind computer database containing the names of more than 133,000 immigrants who entered the United States through Galveston. Special exhibits and educational programs.

Treasures of the
National Maritime Museum

A Catalogue of the Sundials, Nocturnals, and Horary Quadrants in the National Maritime Museum
Hester Higton, Editor

Ports of the World
Prints from the National Maritime Museum, Greenwich c.1700-1870

America and the Sea:
Treasures from the Collections of Mystic Seaport