The P. M. steamer Northerner, J. B. G. Isham, Esq. commander, arrived yesterday at noon from Panama, which port she left on the night of the 8th. She brings no later intelligence from the Atlantic. She brings up the detachment of U. S. troops left at Flamenco, consisting in all of 184, and about 250 passengers.

Judge Heydenfeldt is among her passengers.

The residue of the mail of the 20th, left by the Golden Gate, has been brought up.

We cheerfully comply with a request to publish the annexed card, complimentary to our friend Capt. J. B. G, Isham.

At a meeting of the passengers of the steamship Sortherner, held August 21nd, 1852, on her down trip, Philip Hamilton, Esq . of New York, was called to the chair; and T. B. Smith, Esq., appointed Secretary.

Mr. P. B. Tompkins offered the following resolutions, which were unanimously adopted.

Resolved, That we cannot take leave of the steamer Northerner, without paying our tribune to her, as a fine and safe sea boat, ample in her accommodations, and in neatness unparalleled.

Resolved, That in Capt. J. B. G. Isham, we have found a gentleman, a thorough commander, an agreeable acquaintance, and in the hour of danger, a true hearted sailor, cool, calm, and faithful.

Resolved, That in the officers of the Northener, in every department we meet with a combination of good qualities, alike valuable to the service in which they are engaged, and fortunate for the traveling public.

On motion of Win. G. Wood, Esq., it was ordered that these proceeding be published in San Francisco, Panama, and New York.

The meeting then adjourned.

The Northerner brings us dates from Panama to the evening of the 8th inst. *

The sloop of war Portsmouth had arrived from Guayaquil. In another column a list of her officers will be found.

The El Dorado arrived at Aspinwall from New Orleans, bringing dates to the 22d, two days later than received by the Illinois; but her passengers had not reached Panama in season to take the Northerner.

Telegraph Line across the Isthmus.

We are to have a line of telegraph across the Isthmus, from Aspinwall to Panama. The organization of the company has been completed under the auspices of Messrs. John L. Aspinwall, William Adams and John L. Stephens, as Trustees. The capital stock is $50,000, for which books were opened on the 19th alt. in the city of New York. A few thousand dollars worth of stock would be cheerfully taken in this city. Star.

The Isthmus was, comparatively speaking, healthY; no sickness of any moment. There were, however, but few persons waiting passage. A new system of police has been adopted in Panama, under which a number of strong able-bodied foreigners were engaged as policemen. The Panama Star says that the sickness among the troops on the Isthmus, was caused in a great degree by negligence, and believes that had they been properly cared for, at least one half of the lives would have been saved. The Mail Steamship Co. comes in for a share of blame.

The Northerner, after landing her passengers at Long Wharf, proceeded to Benecia, with the troops on board. Adams & Co's Express House received by the Northerner nearly two hundred packages of merchandise. When the state of the Isthmus is taken into consideration, this indeed may be called "Expressing." 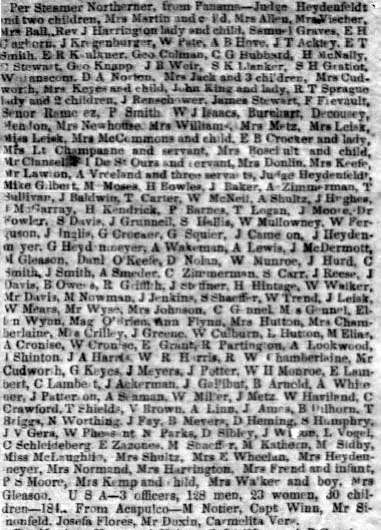