Among the passengers by the Northerner are: 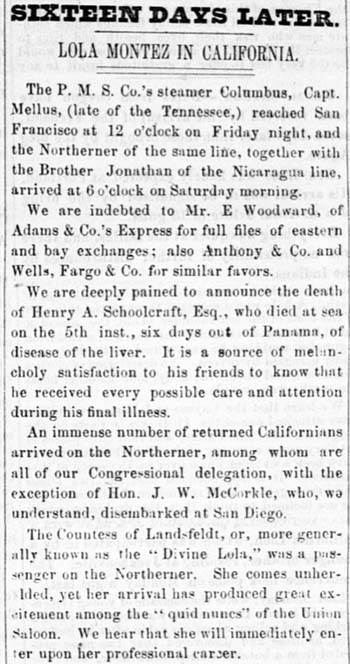 "The Countess of Landsfeldt," or, more generally known as the "Divine Lola" was a passenger on the Northerner. She comes unheralded, yet her arrival has produced great excitement among the "quid nuncs" of the Union Saloon. We hear that she will immediately enter upon her professional career.

The Pacific Mail Steamship Co.'s steamer Northerner, J. B. G. Isham, Esq., commanding sailed from Panama on the 5th inst. at 9 p.m. with 401 passengers and 275 bags mail matter, being the largest mail ever transmitted to California. 8 h at 2 p.m. passed steamer Isthmus bound down - 10th at 5 p.m., 250 miles south of Acapulco, passed steamer Pacific, hence for San Juan -- 11th at 11 p.m., arrived at Acapulco -- left next day at 1-1/2 M. -- Steamer Golden Gate left Acapulco on the morning of the 7th, bound down. The ship John Holland, from New York, bound to this port, 160 days out, put into Acapulco on the 10th inst., in distress, having sprung a leak. May 19th at 6 a.m., arrivd at San Diego -- detained 2 hours -- 20th, at 8 p.m., touched at Monterey. Arrived at this port 21st at 6 a.m. The Northerner has made the run from Panama, allowing for detentions, in 14-1/2 days. But one death has occurred on board. The health of the Isthmus was very good when the steamer left, scarcely a case of sickness being heard of.