The steamship John L. Stephens, Capt. Pearson, with the Eastern mails of Feb. 20th, arrived at this port at half-past 1 o'clock this morning. The following is her memoranda and list of passengers.

Pacific Mail Co.'s steamer John L. Stephens, R. H. Pearson, Commander, left Panama on Friday, March 2d at 9 o'clock P.M. with the mails and 422 passengers, all of whom were on board, with their baggage, seven hours after leaving Aspinwall.

P. M. Steamer Golden Age arrived at Panama on the night of the 28th of February, making the run down in 11 days 6 hours. Her passengers were all on the Atlantic in 12 days 5 hours from San Francisco. The trains are running through regularly every day in from 3 to 4 hours.

Our files of the Panama Star by the Stephens are to the 1st instant.

The Celebration. -- On the 17th, the Directors of the Panama Railroad, and many other distinguished strangers and residents of Panama, embarked on board the Mail Company's steamerColumbu

s, which Capt. Dow, the gallant commander of the mail steamer Panama, had taken temporary charge of and placed at the disposal of the party at an early hour and proceeded to the Island of Taboga.

After a delightful trip down the bay, the party were landed at the British Company's wharf, amidst a salute of seven guns from the Mora, and the roar of cannon from all the vessels in port, the Pavilion and Veranda Hotels, and other points along the shore.

On landing, the company were received by the Commander of the Bolivia, by whom they were entertained in a most sumptuous manner on board of his ship. The party next visited the John L. Stephens, where Capt. Pearson did the honors as gallantly as seamen can do them. In the evening, a large dinner party was given by Col. Totten at the Aspinwall House, Panama.

The British ship John Law, Capt. Percival, bound from Valparaiso to San Francisco, with a valuable cargo oil board, sprang a leak, in latitude 10 deg. South, causing her to make 3,200 strokes per hour. Whilst in this dilemma the American whaling bark D. M. Hall, Captain Pratt, was spoken by the John Law, and Captain Percival, anxious to do the best for the safety of his vessel, offered a very large remuneration to Captain Pratt to remain by the ship during night. This was refused by Pratt, who proposed to take all hands off the ship if Captain Percival would abandon his vessel, which of course was not consented to.

The bark then left the ship, and, soon after, the crew mutinied. The bark on being signalled returned, when Capt. Pratt received the captain and crew on board, and placed part of his own crew on the John Law, giving her in charge to Capt. Crosby, a passenger on the bark.

Capt. Pratt now having charge of both vessels, stood off for the Marquesas Islands, and on reaching there he hauled the two vessels alongside, opened the hatches of the John Law, and commenced transferring the most valuable part of the cargo to his own vessel, allowing the sailors at the same time free access to the liquor, and suffering them to commit all kinds of depredations. After loading the bark with the ship's cargo, Captain Pratt compelled Captain Percival to assign over to him the entire cargo as a compensation for his services, and the authorities refused to interfere to protect Captain Percival or place him in possession of his ship.

The two vessels then proceeded to Tahiti, where Capt. Percival laid his case before the American Consul and French authorities. Capt. Pratt was arrested as also the disorderly crew, and Capt. Percival placed in command of his ship. An action of piracy has been brought against Pratt. 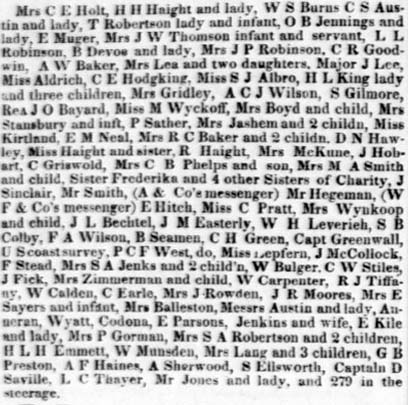