ARRIVAL OF THE GOLDEN GATE

The P.M.S. Co's steamer Golden Gate, Capt. Watkins, arrived from Panama, yesterday morning. She brings dates from New York to the 20th of October. The time from port to port was 23 days and 10 hours, the quickest trip on records.

We are indebted to Adams & Co., Wells Fargo & Co., and J. W. Sullivan for files of papers.

The Golden Gate brings 500 passengers, of which 100 are ladies and 50 children. She was 6 days and 15 hours from Acapulco.

A Traveler. -- The unrivalled steamer Golden Gate, which arrived yesterday, had been absent from the port of San Francisco but twenty-seven days and a half, during which time she has run nearly five thousand miles, besides remaining sufficiently long at Panama to discharge and receive her passengers and freight.

THE NEWS. -- We need offer no apology to our readers for consuming so large a portion of this issue with the thrillingly interesting news brought by the steamer Golden Gate. On the first page will be found full details of the loss of the Arctic, together with various statements of survivors, incident, etc. etc. 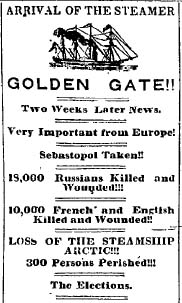 By the arrival of the Golden Gate we have received dates from Europe to Oct. 4th, 17days later than previous advices.

The most important news is tho reported capture of Sebastopol by the allied armies. The following is from the New York Tribune:

It is reported that after one of the most sanguinary battles of modern times. Sebastopol has fallen! The facts as far as known, are that a battle took place on September 20th at the river Alma the French and English with a loss of 2800 killed and wounded, stormed the Russian entrenchments and drove the enemy buck. The Russians are reported to have nest made a stand on the Katch, another battle was fought there on the 23d September, resulting in the defeat of the Russians, who were pursued by the allies to the landward walls of Sebastopol where fighting took place under the walls. According to the report, on the 25th.

Fort Constantine was invested by sea and land, and after an obstinate defence! was carried by storm. The allies then bombarded the city and the fleet.

Ten Russian ships of the line were burned and sunk; eight hundred guns were silenced; twenty-two thousand prisoners were taken, and the Russian loss, in dead and disabled, is estimated at not less than eighteen thousand in Sebastopol alone! In the midst of this tremendous havoc, Menchikoff, with the shattered remains of his force, retired into a position in the inner harbor, and threatened to fire the town and blow up the remaining ships unless the victors would grant him an honorable capitulation. The allied generals demanded his unconditional surrender, and, in the name of humanity, gave him six hours for consideration . . . it was rumored that he had surrendered . . .