The mail steamer Golden Gate arrived last evening at 5 o'clock, after a rapid run from Panama, bringing nearly a thousand passengers and the United States mails.

The Golden Gate left Panama March March 30th, at 3 a. m. with United States mails and 547 packages express matter, and 957 passengers; our passengers arrived at Aspinwall an the morning of the 29th March, and crossed the Isthmus in three hours. On their arrival at Panama they were immediately transferred to the Company's steamboatTaboga and conveyed to this steamer.

The railroad is in excellent order and the health of the Isthmus good. April 20th, at 4 p.m. off San Juan del Sur, spoke steamer Cortes, put on board Geo. S. Porter, bound for San Juan -- had no other communication whatever with her. April 5th, at 11 a.m arrived at Acapulco, received our supplies and sailed at 6 p.m. Nothing worthy of note from the interior. -- 9th at 11 a. m. passed the Co.'s steamer Golden Age off Margarita Island, bound down; 10th spoke whale ship Leonard, of San Francisco, four months out, had 400 bbls. oil and all well; same afternoon at 5-1/2 o'clock, boarded and exchanged papers with steamer Uncle Sam. We have had no deaths and have had one birth.

We are informed that a steamer of the new line, under the auspices of Mr. Chas. Morgan, will be sent forward for Nicaragua on April 8th. The California passengers who will leave San Francisco on 20th March, wiil be brought to New York by the Panama steamship George Law, who will call at Punta Arenas for that purpose.

Later from Oregon and the Sandwich Islands

San Francisco, April 13. The brig "Susan Abigail" brings us one day's later news from Oregon. A company of 350 regulars re-took the Cascades from the Indians with a loss of only two men. The men in the Block House would very soon have surrendered but for the timely arrival of the military. Fifteen Indians, mostly chiefs, were taken prisoners, have been Court Martialed and sentenced to be shot. The steamer "Mary" is not burned, as reported. An attempt was made when the Cascades was taken, but by the promtness of her engineer, who cut her moorings, she escaped. It was not known how many Indians have been killed, but fifteen bodies have been found. The Cascades is all destroyed except the Block House and one other building. 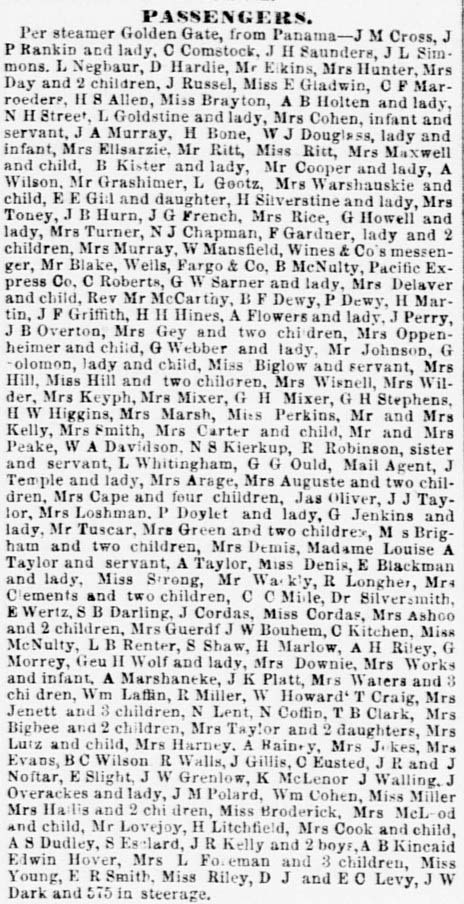