FROM THE ATLANTIC.
Arrival of the Steamer Golden Age

The P.M. Steamship Company's steamer Golden Age, Capt. LeRoy, arrived from Panama yesterday, at 12 o'clock, bringing the mails and passengers from the Atlantic. The following is her memoranda and list of passengers.

Left San Francisco Nov. 16 at 10 a.m. At 11 a.m. on teh 20th was boarded by a boat from the whaleship Wm. Thompson, White, from the Arctic Ocean, with 750 bbls oil in all. Arrived at Acapulco on the 22d, at 7 p.m., 6 days 7-1/2 hours from San Francisco. Left for Panama a quarter before 7 a.m. on teh 23d, and arrived on the 28th at 6 p.m. in 5 days and 10 hours; whole time from San Francisco 12 days and 5 hours. Our passengers reached Aspinwall and left for New York on the 29th. The Isthmus is exceedingly healthy, the dry season has fairly set in, and the roads are in good order, many passengers crossing from ocean to ocean in six and eight hours. The railroad is progressing rapidly, and it is confidently expected the cars will commence running through in the early part of April. The Company's Agents at Panama have received instructions to cals their steamers through, on account of notification lately received from the Mexican Governmetn that a strict blockade would be kept up at Acapulco. This together with the holidays attending the celebration of the Independence of the Isthmus, making it almost impossible to procure laborers, detained the Golden Age at Taboga over 3 days.

Left Panama with 250 passengers and the U. S. Mails Dec 2d at 12M; at noon on the 7th arrived in sight of Acapulco, and there being no blockading squadron visible at 2 p.m., entered the harbor.

The United States steam frigate Susquehanna was there lying at anchor, having arrived from San Francisco on the 5th, officers and crew all well. She was expected to leave for Callao about the 12th. Great excitement prevailed throughout Acapulco in consequence of news lately received that about 5000 of Santa Anna's troops were on their march there, and were then only 50 miles off.

Gen. Alvarez and command were busily employed in erecting fortifications on the surrounding hills, and making every prepration to give them a warm reception, with every confidence of being able to keep possession of the town. The opinion, however, of the foreign residents is quite the reverse.

Arrived off the Heads at 11 a.m. on the 14th; being 11 days and 23 hours from Panama. Running time to Acapulco 5 days and 2 hours; from Acapulco to the Heads, 6 days 13 hours. During the voyage had had pleasant weather, but little sickness and no deaths.

FROM THE EXTRA UNION OF YESTERDAY.

Seven Days Later News.
IMPORTANT FROM MEXICO.
Battle between the forces of Santa Ana and Alvarez.
The European War - Sevastopol not yet Taken.
Burning of the City and Magazine Movements. etc.
New York Election Success of Clark (Whig) for Governor.
List of -Passengers, etc.

The Southern mail as late as due has been received. New Orleans papers of Saturday contain the details of the news brought by the steamship Orizaba from Vera Cruz, which differ totally from the telegraphic accounts previously forwarded, which were probably made up from the Government papers. It is now said that a battle had been fought near Guerrero, and resulted in victory to the forces of Alvarez, who routed the Government troops killing 300 of them. Alvarez's son was at the head of the guerrilla forces and captured a number of prisoners. Alvarez had issued an address denouncing Santa Anna the dictator, and closing with the expression "Down with the Tyrant," "Death to the Dictator!" . . .

Accounts from Washington, Chicago and Cincinnati represent financial matters in those places in a very bad state.

The ship New Era, from Bremen to New York, was lost on the New Jersey coast, and out of 425 souls on board, 230 perished.

Fears were entertained for the sloop-of-war Albany, that left Curacoa in September, for Carthagena, and had not since been heard of. The steamer Fulton has been sent in search of her. 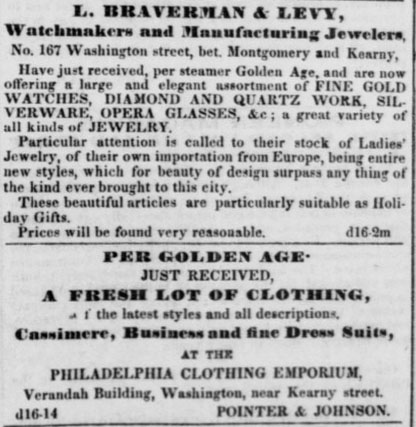