Cabin passage from Sydney to San Francisco in January cost 30 pounds and a steerage passage 10 pounds. Freight was taken on at 5 pounds per ton on weight or measurement.

Note: One report is that upon arrival in San Francisco in April 1850 with 52 passengers after a 71-day passage (the first of seven vessels to arrive from Sydney), the Eleanor Lancaster'screw deserted, as was common then, and her captain used her along the Sacramento River as a grog shop and "hospital." She was moved to San Francisco and rented as a bonded storeship until March 1, 1850 for $700 per month. The captain complained that he had to pay his laborers "six dollars per day and three men do the work of one man." 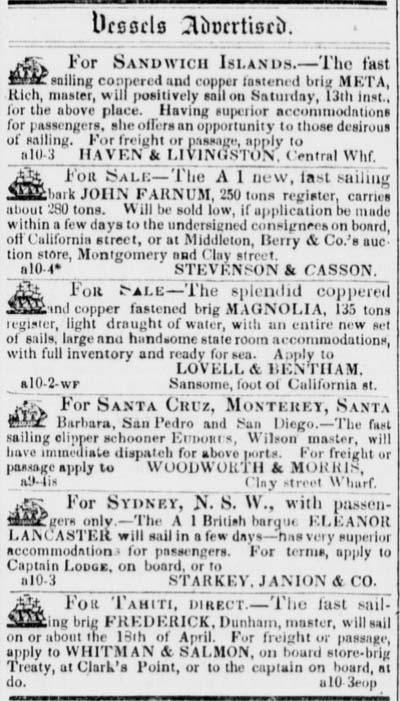 Daily Alta California Shipping Intelligence of April 26, 1850 has her sailing for Sydney under the command of Captain Lodge.

This well-known vessel has first rate accommodations for passengers, and will sail about the 20th prox. For freight or passage, apply on Board, foot of Boradway or to J.H. Eccleston & Co., Montgomery, near Jackson Street.

On February 20, 1851, she arrived in Honolulu, 13 days from San Francisco, under the command of Captain Lodge.

A few tons of cargo.

Early explorers sailed into San Francisco Bay in 1769. Eighty years later the city of San Francisco was a boom town with a population of 40,000. Here is a written and visual record of the discovery and exploration of the Bay and the settlement of Yerba Buena, which became San Francisco. Recounted by the discoverers, explorers, foreign visitors, and early residents. Includes many historic maps, charts, illustrations, and the first two surveys of the town of Yerba Buena.