Charles Bache and VIPS in the Port of San Francisco

PERFUMERY. — A very select assortment ofl perfumery and toilet articles was yesterday presented us, from the newly received stock of Bache & Grotjan, druggists, on Washington street, above the Plaza. — The specimens with which we have been favored are very fine; they will please accept thanks. 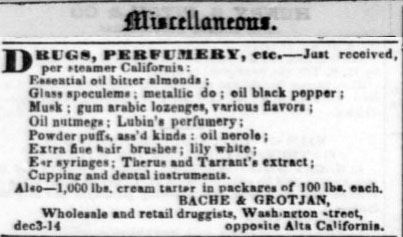 
It is with feelings of sincere regret that we learn of the decease of our estimable fellow-townsman Charles J. Bache, Esq., who, on returning with his family from a visit to the States, died of a disease resembling the yellow fever on board the steamship Cortes, on her last trip from Panama.

Mr. Bache was one of the earliest settlers in our city, and although quite a young man, had, by his industry, intelligence and integrity, laid the foundation for a future of independence. His untimely death has cast a deep gloom in the circles of his numerous friends.

A little daughter of Mr. Bache succumbed to a similar disease, as well as two young children of his brother-in-law, Mr. T.J. Grotjan.

Out of a happy family of ten souls, who left Philadelphia a month ago, only six survive to reach our shores.