U. S. Nautical Magazine: Staghound passages from New-York to San-Francisco include 124, 121 and 110 days respectively. The sailing distance, on the last voyage, was 16,408 miles, and the daily average 158 miles. From Whampoa to New-York, the Staghound has made three passages in 85, 91 and 92 days.

All these, and her many other passages, are considerably shorter than the average of clipper voyages in the corresponding months of the year, between the same ports; yet the Staghound failed for want of opportunity to reach a degree of speed quite equal to the best performances of ships, either of her own, or of less displacement.

The Staghound, which arrived in harbor yesterday morning, is a ship of 1534 tons register. Her model is much similar to that of the previous clippers that have arrived. Her cabin accommodations are very superior. She has on board nearly 2000 tons of cargo? her manifest being 33 feet in length. She made the passage from New York to the Cape in 49 days; from thence to Valparaiso, 17 days; remained in port 4 days; thence to this port in 42 days. Five days out from New York she lost her main-topmast and three topgallant-masts. On the 1st March the picked up the captain and crew, nine in number, of the Russian brig Sylphide, from Rio de Janeiro, bouind for Helsingfors, Finland, to which port she belonged Lat 22 25, long 38 29 W, the vessel having been struck by a sudden squall almost instantly went down; the carpenter was the only man lost. They had been 62 hours in the boat, without food or water, when picked up. Capt. Richards landed them at Valparaiso.

From Freeman & Co: Arrival of the Staghound. ? This clipper ship arrived in the harbor yesterday morning, from New York in 113 days. When five days out, she carried away her main topmast, three top-gallant masts, which caused much delay. Her passage to Cape Horn occupied 49 days; thence to Valparaiso 17 days; and 42 days to this port. She is of 2534 tons register, and has on board nearly 2000 tons cargo. Her manifest is about 33 feet in length. The model of this ship is much similar to that of the previous clippers lately arrived, and her cabin fittings and accommodations are very superior. Capt. Richards reports a second earthquake having occurred at Valparaiso on the 9th April, which, however, was much less severe than the one of the 2d, before reported. Cargo to C. M. Seaver
Passengers: 7 passengers noted: Messrs. Hammett Macy, Master H. Macy, A. M. Macy, John B. Otis, H. R. Helper, S. O. Johnson, J. E. Manning, W. H. Hellman

November 20, 1851, Sacramento Daily Union, Sacramento, California
Private advices from Manila, received by way of China, state that the clipper ship Staghound arrived there on the 3d of August, 33 days from this port.

The Sea Nymph, Argonaut and Staghound are among the numerous arrivals which are reported in our paper this morning. They have all been looked for during the past week, though not supposed to have been over due, as many of the same class of an earlier date from the Atlantic are still out. These ships have done well, and their passages may be considered good. The season of the year is much against a rapid run from the Atlantic to the Pacific, as is usual, and which may be seen by the reports in another column. The Staghound had three skysails set for eighty-eight days, and was within oue thousand miles of this port on the 14th ult . . . We shall no doubt have another fleet to report in our next publication, as well as some wild transactions in merchandise. Speculation is rife in nearly ail descriptions of goods by these vessels, the arrival of which only happily relieves the want of many articles, without depressing the market or effecting prices. Indiscreet speculators may possibly suffer.

September 5, 1852: Per Hurricane: The Staghound of Boston, from San Francisco, passed us at midnight of 5th September, bound up river for Whampoa.

Shipping Memoranda: Per Baltimore: We learn by this arrival from Honolulu that the Staghound, Captain Behm, which sailed from this port August 20th was seen about four miles of that place on the 31st August, making the run in 10 days. She had a fair wind, and all sail set, going off in fine style. 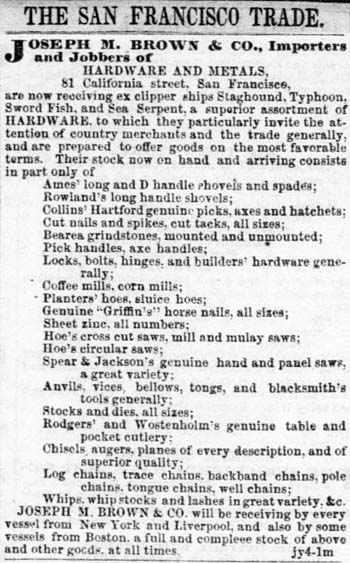 July 2: Clipper ship Stag Hound, Behm, 126 days from New York, via Juan Fernandez 45 days. Merchandise to Hussey, Bond & Hale. Memoranda: Crossed the Equator June 5th, long 116, since which time have had moderate weather. The Stag Hound has had light winds most of the passage, carried skysails 81 days in succession. Put in Juan Fernandez for water, and was detained off the Island 4 days in heavy gales. When the Stag Hound left New York she had on board a patent condenser which would distill 50 gallons of water per day in the harbor, which proved a perfect failure after getting to sea. The clipper ship has hauled into Central Wharf.

The Fire Department, as will be seen by the Chief Engineer's notice in another column, parade in full uniform. Engine Co. No. 2, Hook and Ladder No 2, and Tehama Hose Co. No. 1 will appear with their new fire hats, received on Saturday from New York by clipper ship Staghound.

June 9, 1854: Per Staghound, lat 20S, long 38 W, exchanged signals with a clipper ship showing Boston numbers 55, 56, supposed her to be the Shooting Star, from New York for Hong Kong. 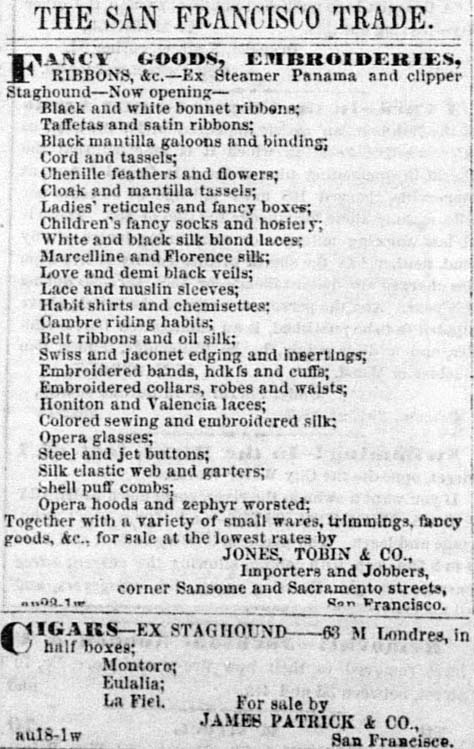 Editor's Note: The following news article may NOT refer to the extreme clipper Staghound. Although she was in Eastern waters during this time, no other information has been located; given her importance, it seems that followups would have been printed.

We have heretofore given an account of an attack made by a large fleet of the Rebels upon the Mandarin trading junks at Whampoa. The Mail contains some additional particulars, from which it appears that this attack was made in the midst of the foreign shipping, to the damage of property and risk of life of the foreign as well as at native residents. A number of Americans and British were on board the Rebels boats and were most active in the attack. They actually cut away the loaded chop boats alongside the Ameriean ship Staghound, which was receiving her cargo from them, and despite the remonstrances of the mate, carried them off. The day after the attack, the Rebels massacred in cold blood all the prisoners, amounting to one hundred and thirty-five. Oce of the Imperalist junks was blown up, and her commander was on board the British Bethel at Whampoa, dangerously wounded. The Rebels threatened to take him thence by force. They destroyed a number of houses on shore, among others that of a druggist, who supplied medicine to some of the poor wretches who, though wounded, managed to crawl on shore. A boat's crew from the U. S. frigate Macedonian, that was lying all the time within a stone's throw of the fight, afterwards recovered the chop boats and their cargoes cut away from the Staghound, and captured three American seamen concerned in the affair, who were found in the Rebel fort, which the China Mail styles a piratical stronghold. Three British seamen were alto taken and handed over to the British Consul. Loud complaints are made by the American residents of the inefficiency of Com. Abbott. The British are equally strong in their denunciation of Admiral Stirling.

The trade between the United States and China had also fostered a large and constantly increasing fleet of fast-sailing vessels, and the success of such ships as the Samuel Ward, Samuel Russell, Rainbow and others, induced ship-owners to venture upon building vessels more exclusively for speed. The California Market opened a wider field for clipper built vessels, and in 1850 the clipper ship Staghound was launched at Boston, and was the first very sharp ship built in America. Many doubts were expressed by nautical men as they surveyed her sharp bows and heavy spars ? many predicted that she would not survive the first heavy gale, and old tars would shake their wise heads as they surveyed the "diving bell." Nevertheless her success was complete, and she remains to this day a monument of the triumph of her builder.

July 6, 1857: The clipper ship Staghound arrived at Hong Kong on the 6th July from San Francisco.

June 21, 1858, Daily Alta California: The sailors of the clipper Staghound got into a disturbance on Pacific street, on the 9th, when one of them, named J. Moore, severely stabbed his companion in the face.

1860: She had one mutiny on board, at Anjer, where the first and second mate were reported stabbed by members of the crew. Captain Hussey was in command at the time.

August 2, 1861: The Staghound left Sunderland, England, with a cargo of coal for San Francisco, under command of Captain Wilson. On October 12, 1861, she was 45 miles south of Pernambuco, Brazil, when during First Mate E. S. Goodwin's watch, the ship was discovered on fire. By 6 p.m., the masts went over the side and the ship was burned nearly to the water's edge and boats started for Pernambuco where they arrived the morning of October 13, 1861.